The Action is the Juice

With nearly three hours of screentime, Heat expands beyond the heist movie’s usual constraints. Heat isn’t about crime, but the characters who bend their lives to either support their violent ways or consume themselves with stopping these perpetrators.

Heat veers inherently masculine, at times playing into olden noir tropes without apologies. Women in Michael Mann’s film exist to bother their men, or worse, get them killed. To Heat, women are often poison, and to a Neil McCauley (Robert De Niro), a necessary if unwanted part of his life.

So, the women stay in the background, brought out as needed for an emotional lure, summarizing relationships through victim hood and genuine romance. The rest of Heat pushes for intensity, with often angry men yelling at other men, or at Heat’s peak, glorifying gun violence as cops and robbers exchange bullets in downtown Los Angeles.

What works is Heat’s ability to normalize the domestic life of men who take pride in their gruesome methods and those who police the city. Without their guns, without their plans, each side struggles to maintain balance at home. It all appears so routine, yet the truth around them bubbles toward tragedy. And, in spite of the wholly ordinary good versus evil plotline, Heat finds empathy for villain and hero alike.

McCauley’s viciousness and endless killing doesn’t restrain Heat from making him pitifully self-destructive merely by being who he is. With an opportunity to escape, he can’t – vengeance defines him; that matters more than anything, even compared to his own life. Vincent Hanna (Al Pacino) does the same, and that dichotomy anchors Heat. In the hospital, Hanna’s daughter admitted for injuries, he leaves his wife. Nothing else matters. Blindness affects both men.

Heat’s action scenes and their unnerving realism garner notable attention. They should. Yet, Heat surrounds those tension-releasing shootouts with equal reality. Without the ability to see McCauley’s thought process, his stressors, and his innate ability to appear rational, the shock of seeing him wantonly gunning down cops isn’t the same. Heat takes its time, arguably too much so, but it’s masterful in using those minutes for purposeful examination. 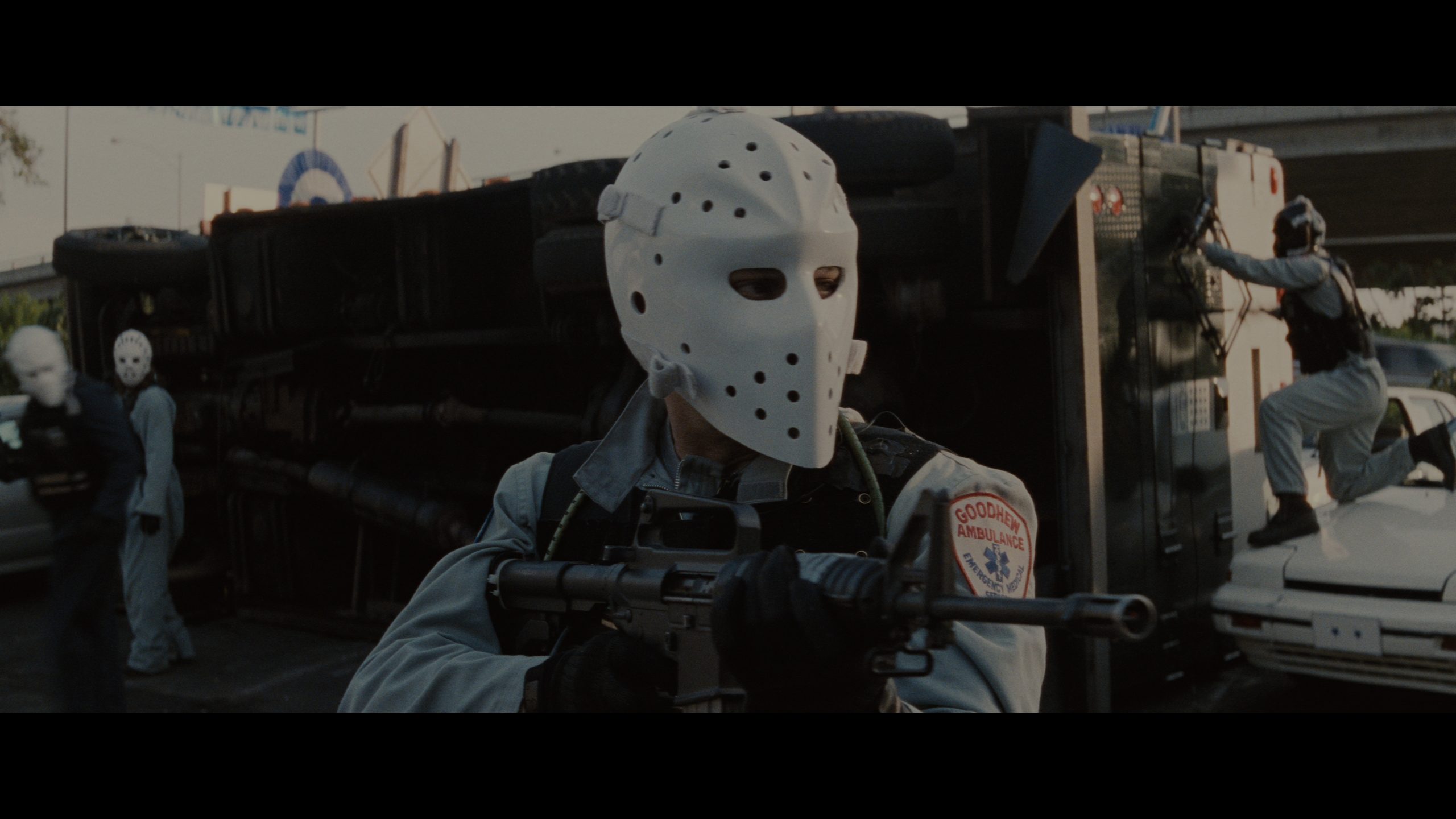 Early chatter online about Heat’s 4K debut concerned the overall dimness. That was appropriate. Heat’s dull brightness sees impact from a new, modern color grade that clips brightness with either a warm or cool tone. White – pure white – doesn’t factor in. The image looks washed out as a result, utilizing the HDR for black levels (and they look fantastic) and barely touching the opposite end.

Is this a disappointment? A little, but only in regards to the peak contrast. Heat otherwise looks spectacular, certainly mastered recently. Grain resolves flawlessly, even amid smoke or dust. Encoding work is sublime. Behind this, texture thrives via facial definition or the city’s details. Concrete, brick, metal – it all looks fantastic even with the lens’ natural softness playing a role.

Subdued saturation keeps flesh tones flat and primaries dry. This isn’t a movie meant to pop, and at times, it’s near monochrome.

While only DTS-HD, Heat remains a precise, full, and active audio track. The energy is constant, sweeping through the surrounds to capture ambiance (cars passing, police radios calling), spread the score around, fill restaurants, or trace the bullets as they’re fired. Shots echo through the city to an unnervingly real degree. While typical per Disney and lower in volume, the impact is barely lessened since it’s such an accurate sound mix.

Strong bass leaves a mark, but additional punch wouldn’t hurt. Depth and power resonate through the room and there’s enough weight to feel the jolts. It’s a lesser effect than top-end action discs though, the design such that guns fire in open air, louder than they are deep.

Everything resides on the two-disc Blu-ray set included inside the package, the same one previously released under Fox. The first holds a commentary by Michael Mann. Disc 2 has two screening panels, one from 2016, the other 2017. An hour long making-of is older, but detailed. Cast and crew discuss Pacino and De Niro in a 10-minute feature. Next is a 12-minute return to the locations. A dozen deleted scenes run near 10-minutes too.

Heat’s distinctive approach humanizes criminality in a way few films do, focused as much on the action as the lives of those involved.