Making an introduction speech at the 2008 WWE Hall of Fame presentation, Dwayne Johnson riffed on John Cena for making The Marine. After the laughter, Johnson noted, “That’s okay. I made Doom.”

Doom deserves derision for its strobe light action, noxious soundtrack, and putrid characters. Eschewing the source material, Doom turns into a zombie-based, corridor shooting gallery, with thin science in the background. Brainy this is not, nor is it expected to be.

Wholly dismissing Doom though does ignore some marginal subtext regarding the military, humanity, and corporate morals. Shallow as this “Marines in space” adventure is for a short-attention span audience, the script’s careful twists develop the characters beyond their muscular physiques.

The problem isn’t the portal to hell opened by scientists. Rather, it’s the willingness to reject basic humanity that lets the demons take over in the first place. Scientists disregard warnings as they tinker with genetics, and Johnson’s militaristic orders slip ever further from rational or caring. Doom is less about bone snapping monsters than it is the mindsets from those rejecting empathy.

Movies like Doom won’t get the credit, but it’s a sharp, harsh move to take superstar like Dwayne Johnson from affable GI Joe-like hero to a vicious villain. In 2005, Johnson wasn’t yet the big screen star he is now, and even as Johnson bemoans the end product, it varies his usually glowing reputation as an infallible action star.

Keith Urban and Rosamund Pike play a brother/sister pair, Doom’s emotional center. Explicit, direct dialog chides Urban’s John Grimm for choosing a sniper scope over a microscope, not demeaning the military as a profession so much as the masculine draw that celebrates brawn over brains. Bit parts for other soldiers play up the silent tough guy, the creepy sexist, and other tropes as Doom plays much like Predator, but on Mars. That doesn’t change much. 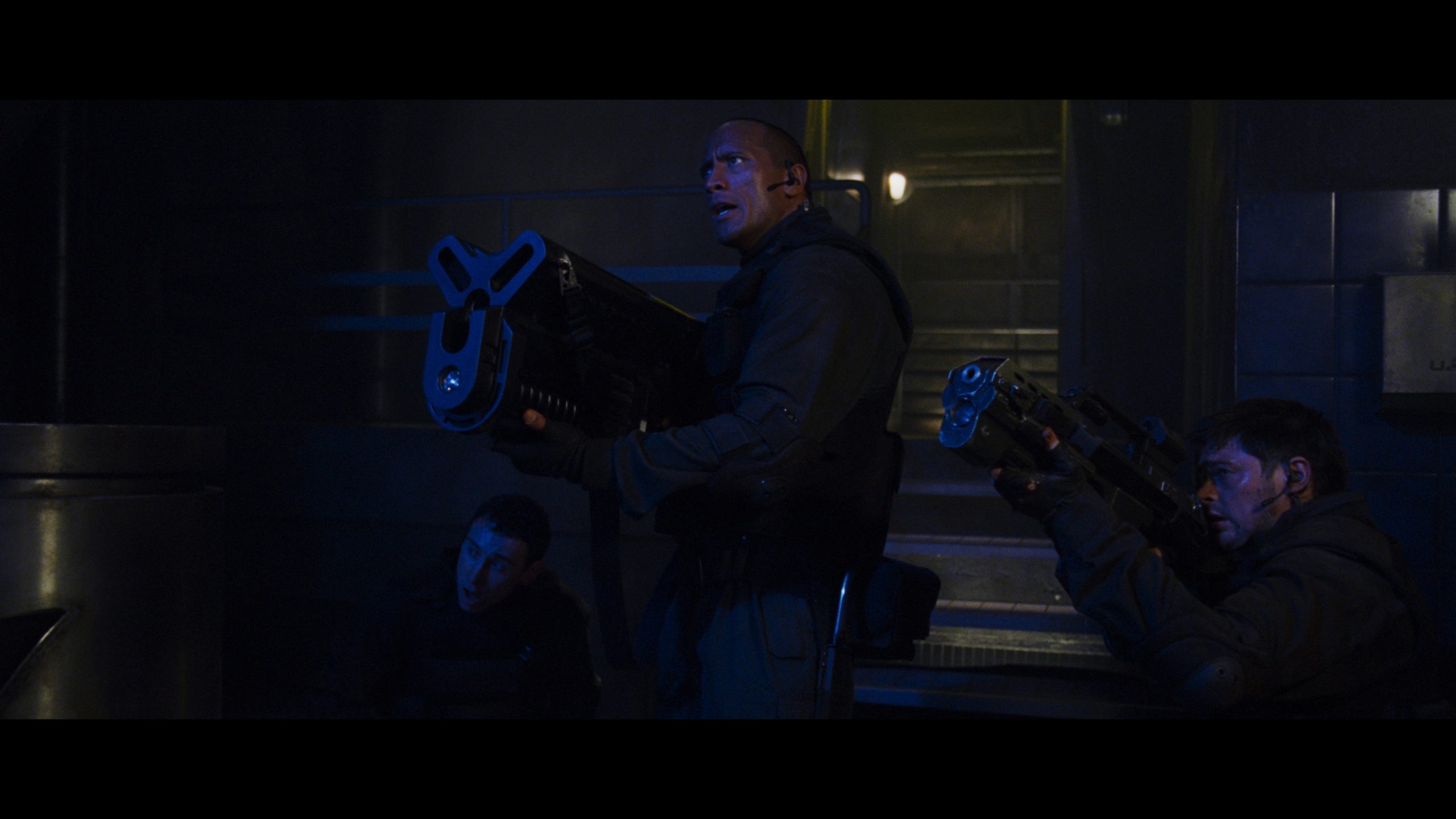 Doom loves black. Pure, deep, even crushing black. It’s everywhere. If there’s need for Doom on UHD, shadows are the reason. They look spectacular and their density is unwavering for the entire runtime. Light sources go out of their way to counter, blindingly bright when inside labs or hallways. This isn’t subtle work.

The master appears fresh, textured cleanly and overlaid with a well-managed grain structure. Other than lower resolution CG effects, sharpness retains a high peak. Minor ringing in places can barely reach an annoying grade, and likely resides on the source itself. Otherwise, it’s a faultless print. Detail freely flows.

Chilly color grading keeps the blues rolling along. A few other primaries (warning lights bring intense reds) appear on occasion, while flesh tones offer the most saturation in Doom.

Aggressive low-end presence adds weight to slamming doors as characters pass through. When the guns start firing, so too does the subwoofer. Solid range fills the room, the power appropriate for a movie like this. Additional kick is needed though. Doom needs the beefiest jolts for its action.

Six featurettes are on both the UHD and Blu-ray. These are the same ones from the DVD edition, and in terms of covering the game franchise, are woefully out of date.