The opportunity to make Jurassic World Dominion true to the genetic fatalist intentions of Michael Critchton’s original novel were there. In its own ridiculous dinosaur movie way, Jurassic World Dominion plays on Biblical events, from a famine-causing locust swarm to an ark. This all the result of unlimited capitalist greed and unhinged scientific tinkering. The original Jurassic Park novel made John Hammond pay for his dino park with his life; the movie turned him into a cheery, Santa-esque grandpa. It’s obvious home studio Universal wasn’t about to tinker with the legacy.

Jurassic World Dominion ends happily. That’s a mistake, but fatalism isn’t what it once was in the ‘70s, and the goal here is riotous visual effects mayhem – and nostalgia. In that, Dominion isn’t that different from Jurassic Park III, placating audiences through relentless monster attacks, revisiting characters, and celebrating the wonderful terror as people become food.

This isn’t a smart movie. Some of the intellectual dialog shared by lead geneticist Henry Wu (BD Wong) belongs in a b-movie dumpster. A cloned child remains the narrative sore spot of this series, and the decoupling of raptors from their vicious introduction was a gross error for everyone other than marketing.

Yet, although egregiously long (and an extended cut adds nothing worth noting), Jurassic Park Dominion keeps stomping along. The interest lies entirely on the dinosaurs, admitting, like Jurassic Park III, the reasons to watch are the creatures. By wrapping the story around through the original, this allows the human characters to become poster boards, spitting out one-liners en masse to generate laughs. Then, fan service that finds Alan Grant (Sam Neill) and Ellie Satler (Laura Dern) still shrugging off their obvious attraction to each other.

It’s pure studio-produced hokum, borderline guilty entertainment, yet so entrenched in delivering an all-out dino bonanza as the definitive series finale, it’s hard to fault Jurassic World Dominion. What’s provided is what movie goers check on their exit surveys during pre-release screenings, a lowest common denominator measurement, sure, but Jurassic World Dominion doesn’t seem embarrassed. So it embraces the ludicrousness of pop cinema, tosses in revoltingly simple ethics in regards to DNA tampering, then puts a T-Rex on screen to fight stuff. Everyone goes home happy. Tired because of the length, but happy. At least, that’s the intent. 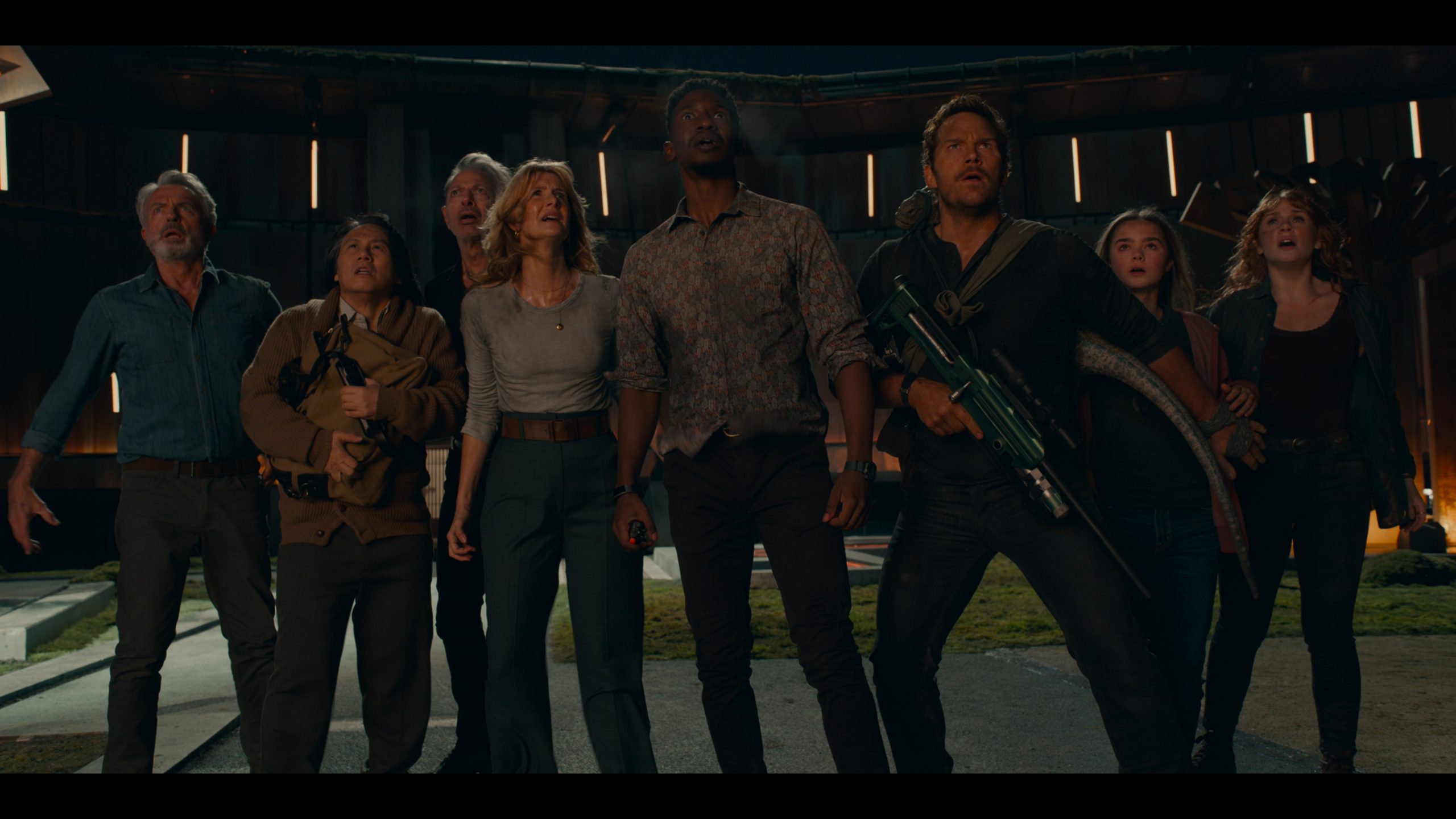 While finished at 4K, the varying sources create inconsistencies in the imagery, however minor those are. A slight grain filter makes minimal impact, but it’s preserved well by the encode. Softness comes and goes as the cinematography dictates. This means fluctuation in fidelity, although at its best, Jurassic World Dominion looks stellar. Facial texture soars. Details on the digital and practical dinosaurs shine.

Dolby Vision follows the color grading, veering between cool and warm palettes. Primaries have their moments, whether the forest greens or the overall warmth in the cities. Flesh tones look spot on. Bryce Dallas Howard’s eyes seem to glow in close-ups. Blue’s stripes stand out from his dense gray hide.

Excellent overall contrast grabs the life from snowy scenery. Contrast swells but without feeling exaggerated. Black levels prefer a dry approach early on, off from pure black, keeping shadows flatter. Dimensionality wanes by design, but picks up in the later acts. Rich shadows then begin to dominate, and Jurassic World Dominion takes on the visual weight it deserves. This isn’t a constant – shadows steer toward dense blues or greens in spots – but overall, the result is impressive.

Continuing a streak that started back in 1993, Jurassic World Dominion’s monster DTS:X track is world class home audio. Best of the best stuff, unquestionably. Immediately, the dinosaurs roam the screen, slamming the low-end with ridiculous force, shaking rooms, if not an entire house. The depth is reference grade at all times, and the range extreme. Jurassic World Dominion is among the elite bass discs.

Positioning places the action in every speaker, sound effects traveling flawlessly between channels. Aggression stays high, splitting the fronts as well as the rears. Music mixes wonderfully, audible among the heaviest action without losing focus on the scale. Heights factor in where needed, from water droplets splashing around to flying animals flapping wings.

Three bonus selections come on both the UHD and Blu-ray. One is a bland featurette, the other is a 10-minute short film that’s passable, but the 47-minute making of is worth a look, even if it’s a series of EPKs smashed together. Note the theatrical and extended cuts feature on both discs.

Dinosaurs eat lots of people throughout Jurassic World Dominion, a ridiculous if endlessly enthusiastic tribute and send off to this franchise.