The perfect behind-the-scenes pairing for Misery were Stephen King and Rob Reiner, both steadfast liberals whose individual takes on this churlish satire flawlessly mirrors their thought processes.

Credit to Kathy Bates too, of course. Bates’ ability to create punishing suspense with only wicked stares can’t go unaddressed. As written, her Annie Wilkes conveys a nearly unreasonable spite for the far right Christians; neither Reiner or King aim for subtlety.

Misery isn’t ashamed of its perspective

Wilkes’ insanity manifests in various ways, but her dialog is always precise whether content about having her favorite author in her home – trapped by injury – or utterly mad Paul Sheldon (James Caan) doesn’t do precisely what she asks. Wilkes is falsely loyal, demented by way of words, and incapable of separating fiction from reality. Biblical flourishes are anecdotal, but Wilkes is a character groomed by isolation and fearsome belief. What she reads is truth, even when browsing a book store’s fantasy section.

She sees Paul as a God, a man controlling fate. That he’s a false idol doesn’t compute in her mind; to her, this is all planned and necessary. Faith provides her with a basis to lash out, spurned on by a gruesome past, that in her own mind, blurs Sheldon’s work and her own. The terror comes from how certain Wilkes acts. Violence must happen. People must die. So it is written, or rather, so it will be when she has her way.

Reiner’s direction seems almost too giddy in pointing out religious hypocrisy. Early in Misery, Wilkes forces Sheldon to burn a draft of his new book – there’s too much cursing for her, so therefore, no one can read it. That she’ll censor, but in Misery’s iconic ankle-smashing, nothing is cut. Employing violence and causing pain to what she sees as an essential end is fine. A child hearing a casual curse is not something allowed in her world.

It’s the superficial niceness, like the artificial smiles and wide eyes, that make Wilkes a force. Crass, almost childish as the depiction is, Misery isn’t ashamed of its perspective, but instead uses it to create uncertainty. Wilkes’ demeanor seems so passive, gentle, and kind. A good church-going, God-obsessed woman who blends seamlessly into a small town, yet harbors a sadistic hate, brought on by a religious fervor. The duel of words between Wilkes and Sheldon is sensational entertainment, with the men behind it all spilling their own worldview as Misery goes. 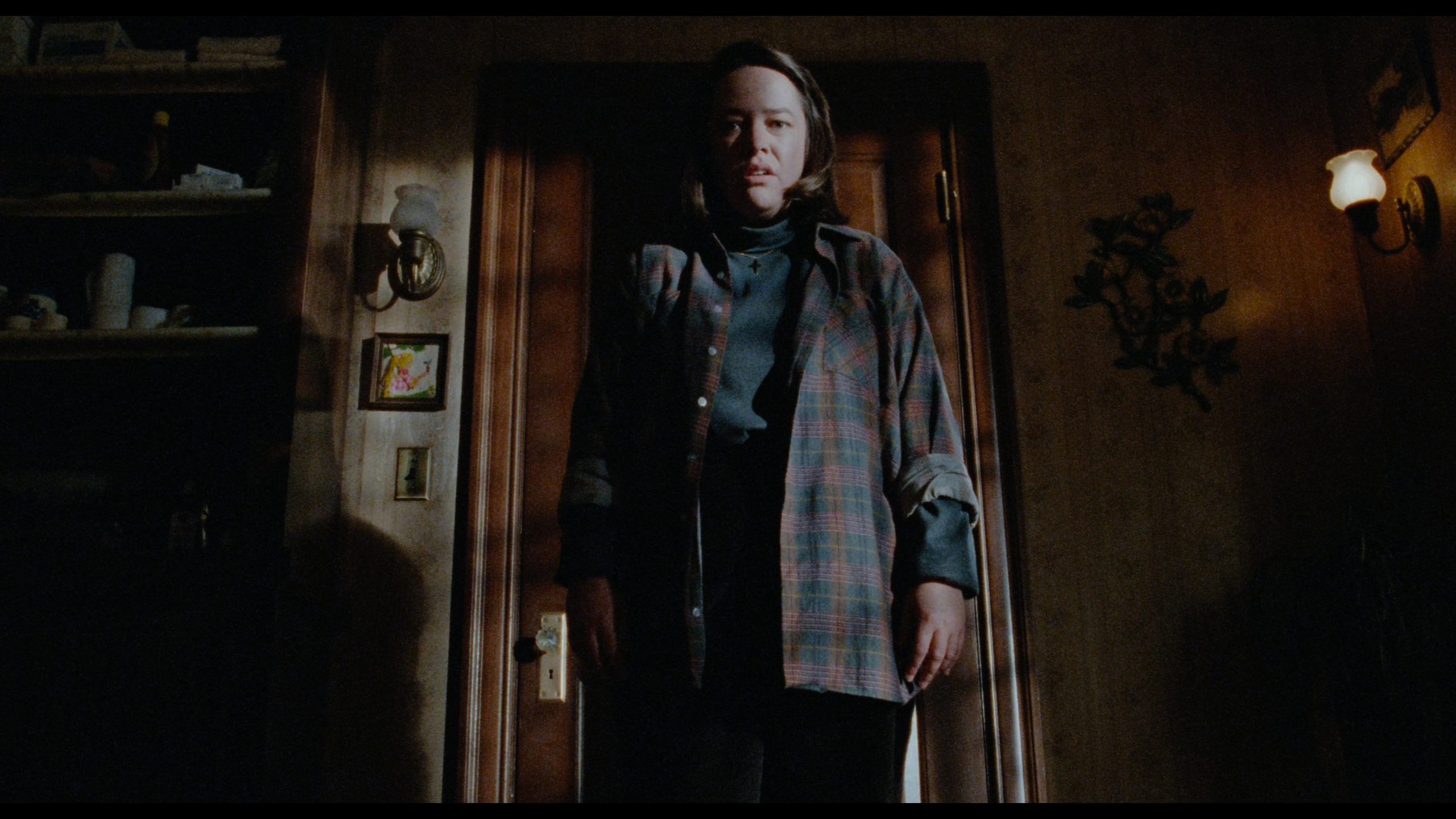 Kino’s encode hits a few troublesome spots, the only notable fault in their presentation. Sourced from a 4K scan, the natural sharpness of this pristine film stock keeps up its consistency. While a small fidelity loss occurs when/where the encode can’t keep up, it’s marginal. Misery loads up on facial texture and other definition. Image firmness pulls out the best from this source material.

In Dolby Vision, the color clash between the interior warmth and exterior chill looks quite dynamic. A slight digital tweak is detectable, if contained. The result remains natural, authentic and attractive. Flesh tones produce a spot-on saturation. Snow-covered trees allow enough greenery to pass through, while other primaries take off too. Misery is gorgeously saturated.

Boosts to the contrast stay fairly subtle. Highlights give Misery a tiny jump in dynamics. Snow doesn’t necessarily pop even when under sunlight. More energy is derived from the black levels, beefing up shadows while driving home the print’s dimensionality. Misery doesn’t sell the format on its own, but improves over the HD offerings enough to make it worthwhile.

Stereo and 5.1 mixes are both similar in spacing (DTS-HD in each case). A wide front soundstage makes frequent pans across the stereos for accurate positioning. Score and soundtrack selections make use of this available width too.

Equal in fidelity, the two tracks differ mostly in ambiance. Heavy wind/snow fills the surrounds. Thunder and rain equally rush between the rears. Dynamics stay strict with much of the low-end energy derived from the music.

The UHD itself contains dual commentaries, one from director Rob Reiner, the other screenwriter William Goldman. Over on the Blu-ray, seven (older) featurettes comprise the rest of the extras. In that batch is a 30-minute making-of. Others run a little bizarre, focusing on what to do when stalked, and what laws were put in place. That’s mixed with a focus on Bates and her character. There’s too much filler in these bonuses.