The Droogs Are Coming

Stanley Kubrick’s A Clockwork Orange remains disturbing and provocative five decades after release. That is a clear testament to Kubrick’s shocking adaptation of Anthony Burgess’ novel and his meticulous craftsmanship as filmmaker. Initially rated X in America, the outrageous violence and intense sexual content were almost unimaginable for mainstream audiences upon release in 1971.

Banned in Britain for decades, the film resonates with an undeniable cinematic power. It takes a completely unsympathetic protagonist and uses him for a profound examination of violence and society’s overbearing response. Kubrick was at the height of his creative powers when formulating A Clockwork Orange, one of the auteur’s most staggering achievements.

Kubrick was at the height of his creative powers when formulating A Clockwork Orange, one of the auteur’s most staggering achievements.

Kubrick was already being hailed as one of Hollywood’s most innovative and accomplished directors with films such as Dr. Strangelove and 2001: A Space Odyssey under his belt when he switched studios and began working with Warner Bros. You can then imagine how the visceral, almost dangerous brand of storytelling used in A Clockwork Orange took everyone by surprise. Brilliantly conceived and executed, the powerful film’s mesmerizing combination of sight and sound makes for an uncomfortable, yet unforgettable, experience.

Malcolm McDowell stars as one of cinema’s most twisted icons, the derby-hatted Alex DeLarge. A young man who still lives with his doddering parents, Alex amorally terrorizes locals by night with his droogs, a gang of like-minded youths. Set in a dystopian England in a near future plagued by violence, they rampage through the night. No one is safe from their violence as they rape women and beat the elderly. Kubrick took inspiration from a wave of gang violence across London during the Sixties.

The loathsome Alex is finally caught by the police after he callously murders a woman during a robbery. Looking for a political answer to the growing discontentment by a fearful citizenry, the system finds a solution for young men like Alex. The authorities brainwash Alex in prison, removing his violent impulses and unchecked sexual drive. Alex feels sick and nauseous whenever a violent or sexual thought crosses his brain, effectively neutering his dangerous inclinations. Now “cured” by the scientists, Alex is freed from prison.

A Clockwork Orange is an undeniable masterpiece, a landmark of cinema in the 1970s. Profoundly disturbing, it’s a symphony in visual storytelling. Raising more questions than answers, Kubrick’s demented film is completely unforgettable and compelling despite the lurid themes.

Malcolm McDowell gives his career-defining performance with astonishing nuance and understanding for such a young actor. The film makes viewers ask themselves if the government’s inhumane solution for Alex is how society should handle young hooligans, and the dramatic effects from losing his natural instincts. Dripping with insight and irony, the unrepentant narrative is blunt but effective. 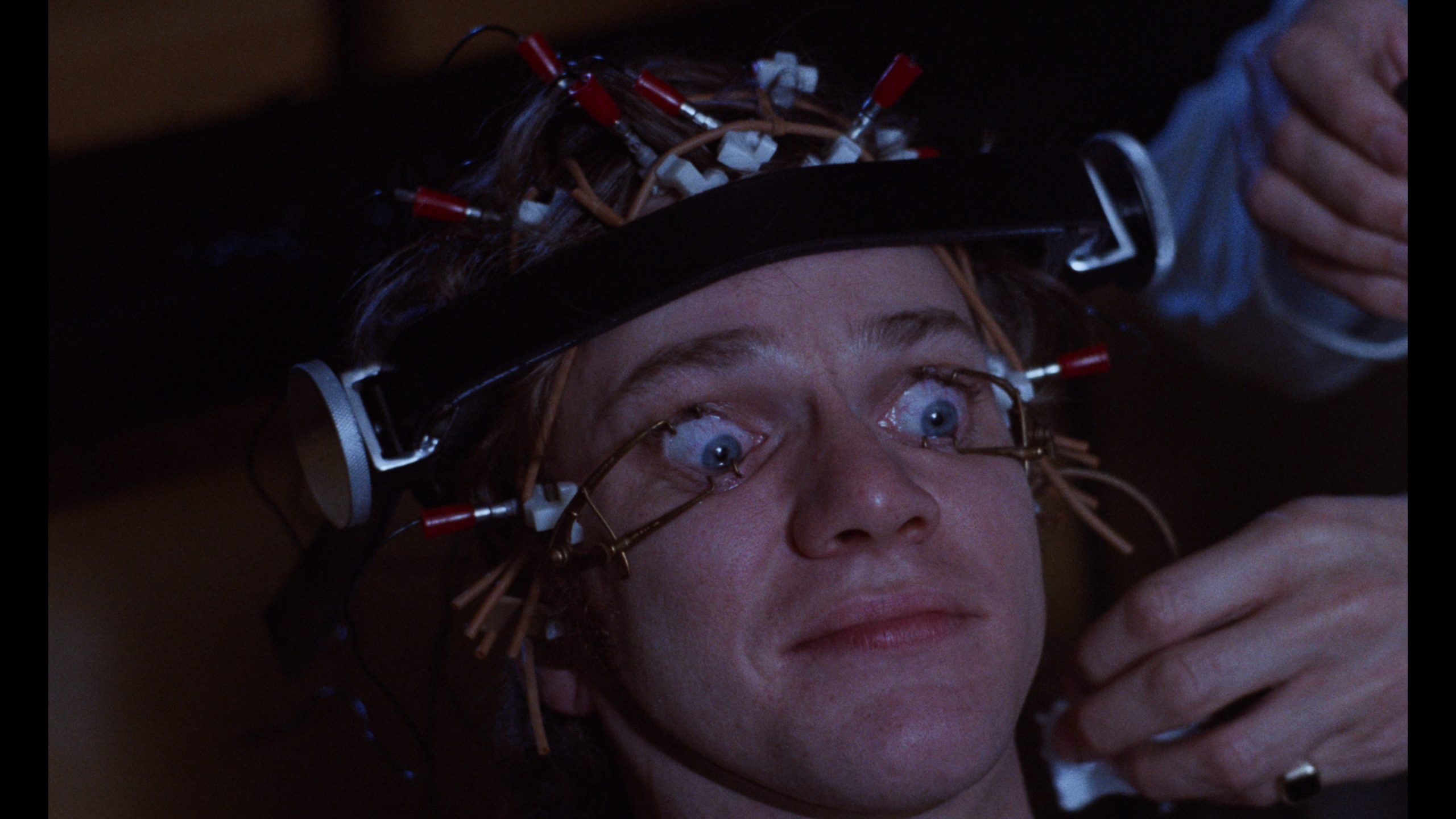 A Clockwork Orange receives a film-like, organic 4K restoration headed by Warner’s respected MPI team in consultation with Kubrick’s right-hand man Leon Vitali and the Kubrick estate. This is a respectful color correction which doesn’t attempt an elevated contrast or heightened color for splashy results. There are better catalog transfers out there from the era but A Clockwork Orange has always looked a little rougher on home video.

The HDR10 is decidedly conservative by the standards of most studio UHD releases. A touch colder in some respects, it’s up in the air if this is what Kubrick would have wanted. Presented in the film’s original 1.66:1 theatrical aspect ratio, the 2160p video offers solid grain reproduction and fine black levels. While more refined, the video provides a modest improvement in definition and clarity over Blu-ray.

Yes, A Clockwork Orange has never looked better outside of maybe first-run theaters back in the day. Kubrick’s meticulous craftsmanship packs each frame with hidden detail waiting to be discovered, though by all rights this is not an overwhelming presentation that blows you away. The 1971 film is mastered at 4000 nits for maximum luminance and 0.005 nits for minimum luminance. The HEVC encode smoothly captures the film elements in all their muted glory on a UHD-66. There’s a minimum of evident video processing. A touch of ringing appears in one scene.

It should be mentioned that Warner has always included the X-rated cut on home video despite listing the film’s edited R-rating. This is the same unflinching cut which first hit theaters.

Warner has once again apparently remixed the surround audio released before on Blu-ray. The movie’s complex narration and innovative electronic scoring of classical masterpieces from Wendy Carlos has never sounded terribly full with perfect fidelity. While Kubrick’s action and movement are intimately linked in A Clockwork Orange to the powerful score, this doesn’t compare with modern recordings.

This new 5.1 DTS-HD MA audio feels over-mixed and more solidly compressed in terms of dynamics. Dialogue reproduction is serviceable but the dated recording’s limitations occasionally arise. Thankfully, the original monaural soundtrack is included in adequate Dolby Digital. What it lacks for in lossless fidelity is made up by a more cohesive soundstage and tighter sound.

A Clockwork Orange hits 4K UHD with the first BD pulled from the 2011 anniversary edition. The Movies Anywhere digital copy redeems in UHD quality. First pressings should also include a slipcover. Best Buy has an exclusive 4K UHD SteelBook edition which duplicates the contents of the regular retail release.

The only special feature found on the 4K UHD is the audio commentary, everything else is relegated to the included Blu-ray.

Audio Commentary by Malcolm McDowell and Historian Nick Redman – Redman is mostly along for the ride but McDowell lights up the discussion. It’s a fascinating commentary for fans.

Channel Four Documentary Still Tickin’: The Return of Clockwork Orange (43:42 in SD) – Produced by Channel 4, this well-made bonus examines the controversy over Kubrick’s movie, explaining the film’s “demonic level of attention,” and its influence on culture, politics and society, which led to the director’s self-imposed ban.

Turning Like Clockwork featurette (26:19 in HD) – Covers the violence and media response.

Malcolm McDowell Looks Back featurette (10:30 in HD) – The actor looks back on his role through the lens of various photographs from the movie and covers the brainwashing scene in some detail.

Full disclosure: This 4K UHD was provided by the label for review. This has not affected DoBlu’s editorial process. For information on how we handle review material, please visit our about us page to learn more.

Stanley Kubrick’s ultra-violent masterpiece about a dystopian future is his most provocative and visually stimulating classic.