Note: The following essay contains spoilers. Our original theatrical review of Godzilla: King of the Monsters is safe, although different in conclusion.

The Oxygen Destroyer in 1954’s Godzilla represented Japan’s perspective on nuclear war, a somber story catalyst; its destructive power is a scientific accident and the continuing potential for misuse a moral concern. Creator Dr. Serizawa uses the weapon only after witnessing a nation in mourning. He then takes his own life, ensuring the Oxygen Destroyer’s reality is never repeated.

Godzilla: King of the Monsters dumps its Oxygen Destroyer as a casual easter egg. No one discusses fallout – it’s used off the coast of Mexico, so that’s not a U.S. concern – and the long term impact irrelevant when the script moves on.

Toho Studios didn’t always treat their metaphorical character with reverence. By the ‘70s in Godzilla vs. Megalon, Godzilla turned from a nuclear manifestation to defender of proliferation. It’s bizarre to watch. Yet, the few Godzilla features produced in the west never engaged with these themes. Or worse, actively avoided them. In 1998, Godzilla shifted blame. It was French bombs that unleashed the monster. Rebooted in 2014, that Godzilla spent time chasing a nuke as monsters played keep away. Then, a soldier detonated the bomb just offshore from San Francisco to no concern.

It’s remarkable, actually, the blinders required to tell a story so wrapped in nuclear ideology, yet never once treat these weapons with the fear they deserve. King of the Monsters primarily portrays them as a positive force. The one look at San Francisco shows a city unpopulated, yes, but regrowing to its natural state. Vera Farmiga’s character cites this as a rightful outcome.

Farmiga plays a terrorist though, so she’s wrong. That’s the argument, but King of the Monsters takes other steps to support (or outright ignore) the missile’s potent devastation. Knocked out by the Oxygen Destroyer, Godzilla rests in his dormant undersea home. It’s up to – of course – the lone Japanese character Serizawa (Ken Watanabe) to haul a nuke into the monster’s domain, set it off, and sacrifice himself in the process. Tone deaf writing, and attaching Serizawa’s watch (stopped at the second of Hiroshima) as a metaphor is an insulting, grotesque warping of history.

In a tight close-up, Kyle Chandler boldly asks, “How many nukes do you have?” the expectant answer assuming that a higher number leads to a better outcome. But yet, King of Monsters is utterly gunshy about depicting destruction. Devastation happens during monster battles in a weird before-and-after style. Boston stands in its prime, a cloud of dust covers Fenway, and the park is gone.

Focus shifts to human characters (improbably surviving) while things crumble. King of Monsters represents American cinema still reeling from 9/11, with images of people running from debris fields, searching for their loved ones. Watching or depicting skyscrapers falling with any regularity though, even in something this over-the-top, is still too much.

Avoidance of devastating spectacle saps the kaiju of their scale; they fight mostly in ruins. Like in 2014, King of Monsters shoves these titans behind walls of snow, rain, or dust. Exposing any degree of unreality to these CG effects is worthy of condemnation in the west, so they hide. Unlike those tactics in 2014 though, King of Monsters isn’t a mood piece.

In the final moments, Godzilla melts down, a reference to 1995’s Godzilla vs Destroyah in which Godzilla rose from the sea, glowing from internal fire, causing worldwide panic. He’s set to go off, taking the planet down in a nuclear cataclysm, the final punishment for American military aggression. In King of Monsters? The meltdown is an inconvenience, giving the quagmire of human characters 15 minutes to escape before Boston vaporizes with Godzilla. But that doesn’t happen. No, King of the Monsters uses the resulting ball of fire as an offensive weapon for the cause of right, and without considering the catastrophe about to befall a major American city.

“It’s a bad time to be a Red Sox fan,” quips the comic relief, because that’s an easy way to feign ignorance; this whole movie does for the sake of creature battles. Certainly, King of the Monsters provides plenty of clashes and a dazzling array of fan service (especially Bear McCreary’s score), yet never wants to deal in reality unless the result can be made to look cool. 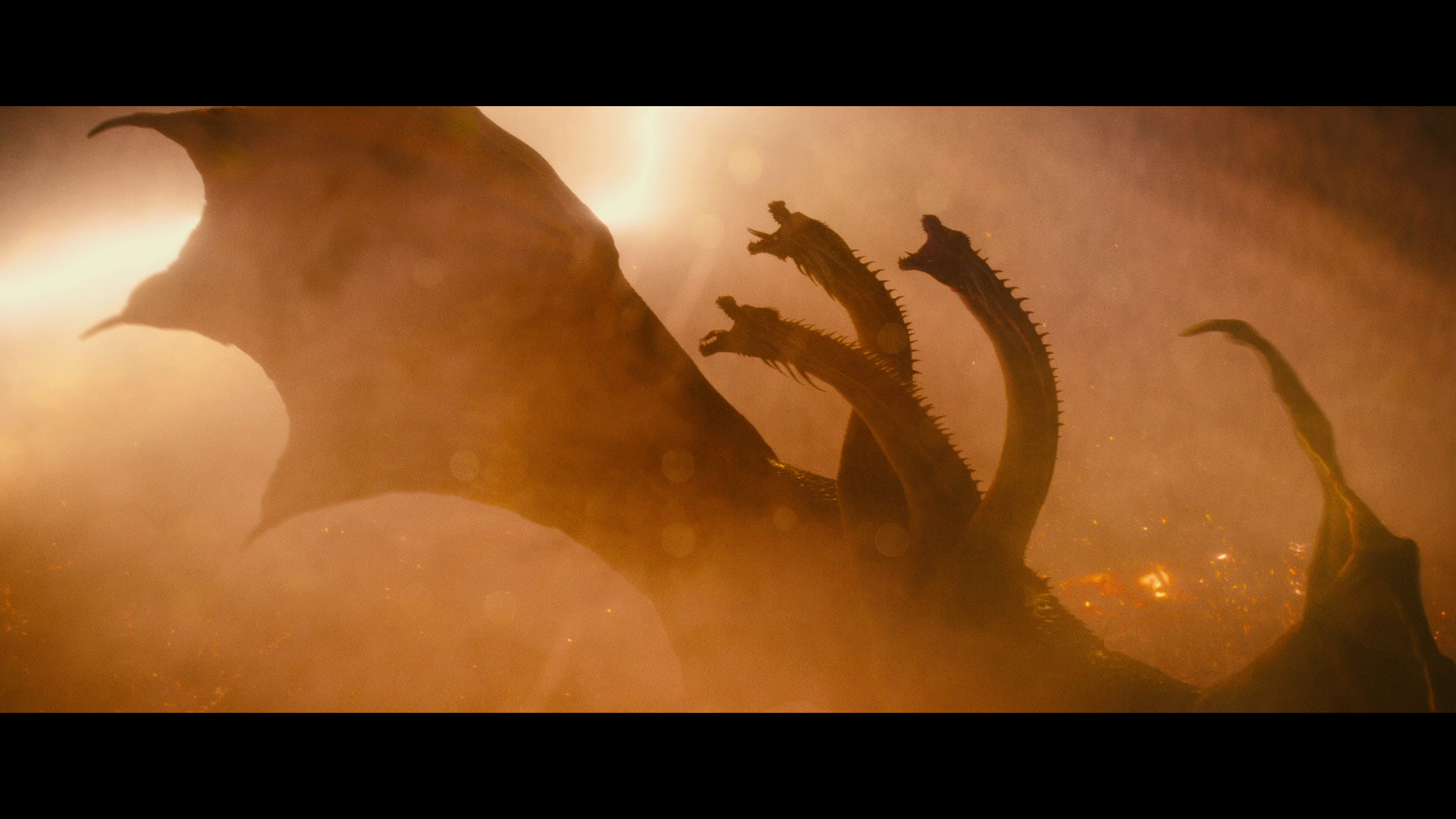 This is not an easy transfer to pull off. Credit to Warner’s compression team. A thin artificial grain structure is paired with mammoth storms shooting snow and rain, plus entire walls of dusty debris. With all of that, still no artifacting. Impressive work, keeping King of the Monsters clean in its move to the home screen.

Dolby Vision is the HDR choice, an often splendid effort too. Once past the opening scene in a typical kitchen with vivid, organic color, each monster is assigned a specific palette. Added color depth adds vibrancy to these hues, less garish and exceptionally layered. Better, HDR pushes hard on things like lightning, lava, and radioactive breath. Intensity never holds back, choosing to clip into pure white to better sell heat and power. King of the Monsters does this with fluctuating black levels, inconsistent for the sake of tone, not any fault of the transfer. Depth holds firm.

With the amount of swirling snow, flaming embers, and debris, the 3D conversion is often sedate. That’s a disappoint as the 2014 Godzilla left a mark on the format. There is depth to King of the Monsters, but it’s not pushing any great amount of fall in or pop-out. Away from the visual effects, human-oriented scenes linger as if barely trying. Scenes on the undersea base (with a deep command room) only marginally register the intended scale.

Great moments happen in seconds. Say, Rodan flying in and snatching a pilot out of the air. The sense of Rodan’s beak plunging out from the screen is total. Destruction sends out dust and debris, helping maintain dimension in visual chaos. Overall though, 3D is simply there.

Eardrum-crushing LFE scales to match the giant monster’s weight. It’s a go from the opening logos; thundering footsteps do not hold back. This is the crunchy, powerful, and unrelenting low-end support of reference discs like Pacific Rim. Godzilla’s roars rattles walls, and falling kaiju aim to damage foundations.

King of Monsters isn’t loud for the sake of it. There’s size to maintain, and positional speakers capture battles in each channel. Overheads don’t work as often as expected (but handle water or falling debris sublimely) yet noticing such in the middle of the sonic chaos is difficult. Rear channels sweep airplanes through their ranks, plus manage monsters as they take up positions. Stellar stuff, and pinpoint in accuracy.

A commentary with director Michael Dougherty, writer Zach Shields, and actor O’Shea Jackson Jr. shows up on both the UHD and Blu-ray. The rest is Blu-ray only.

Featurettes begin with the pale Monsters 101, short minute-long looks at each featured attraction. Skip ‘em. Evolution of the Titans fares better anyway, four more sections for a total of 27-minutes. These offer discussions on designs and character traits. Oddly, locations earn a feature with more depth. Titled Monarch in Action, each key scene (five of them) is explored, running 33-minutes.

A puff piece focused on Millie Bobby Brown is next. That’s followed by Welcome to the Monsterverse, existing to inform those unaware this movie connects to Kong: Skull Island. A look at Monarch tech runs eight minutes, deleted scenes five, and an interesting piece on what draws audiences to monster stories runs 14-minutes.

Godzilla: King of the Monsters

While creating scale and spectacle, Godzilla: King of the Monsters avoids the reality of its circumstances yet still chooses to engage with a western view of nuclear weapons.

The 15 unaltered images below represent the Blu-ray. For an additional 52 Godzilla: King of the Monsters screenshots, early access to all screens (plus the 100,000+ already in our library), 75+ exclusive 4K UHD reviews, and more, support us on Patreon.