Dropping Gareth Edwards’ 2014 near arthouse take on giant monsters, the follow-up concentrates on national anxieties. This sequel engorges on desperate American feeling and dialogs. Godzilla’s always stood in for various cultural values, some great, some not so great. Some subtle, some blatant. Godzilla: King of the Monsters then is a story of how loss affects us, that general post-9/11, wartime character construction. Family separation sets up a cross-continent chase, less concerned with empathy and personal connections than having multiple viewpoints to see monsters smashing stuff. 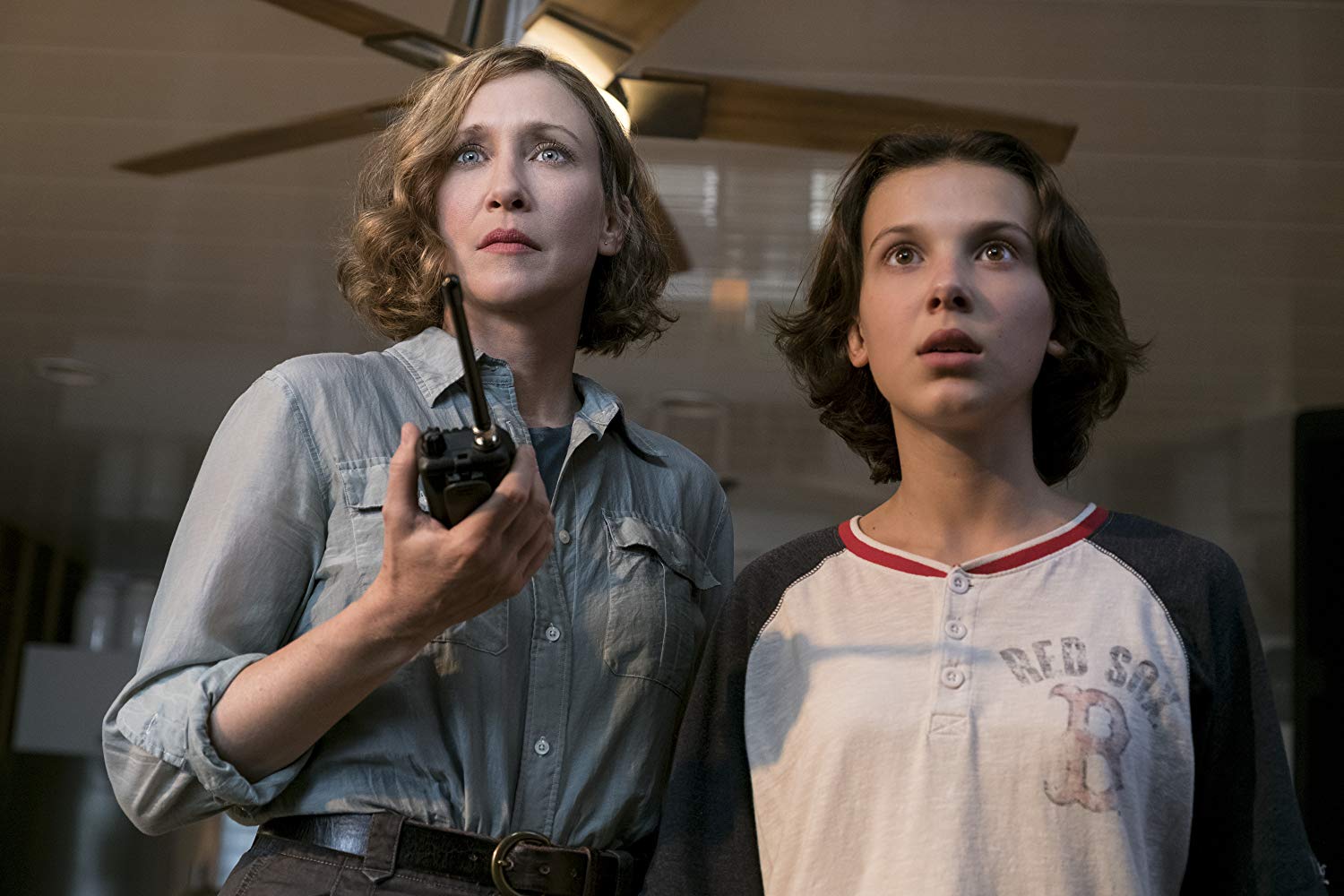 The story (human and monster) draws on sacrifice themes. In times of tragedy, people react with a sense of purpose – something greater than self. War and 9/11 invoked, again. However, some of this involves a nuclear angle, twisted and distorted to make such weapons appear positive. This Godzilla was spawned by way of nuclear bombs, spoken as such in Godzilla: King of the Monsters with the depth of a ‘50s sci-fi schlocker. Then nukes save the world, empowering this idolized behemoth.

Nuclear weapons bettered the world, says this script. The casualness with which American cinema speaks of endgame-like weapons reaches an absurd crescendo here. Godzilla is a Marvel superhero, a radioactive one, and the only issue is that he steps on stuff while saving Earth.

For much of the runtime, the human cast flies toward action on a super-powered stealth bomber-like plane (which impressively never needs refueled), swaying in and out of improbable danger with hardly a scratch. It’s remarkable, actually, how invincible the heroes become in this movie. Giant monsters churn concrete, smash steel, and shatter glass. Humans run through this melee without a drop of blood to show for it.

It’s fair to criticize Gareth Edwards’ prior approach. It felt as if Godzilla were treated as secondary, but his methods were consistent. Eye level, always, and sure of it. This take from director Michael Doughtery abolishes that, choosing spectacle above all. Godzilla: King of the Monsters is so flush with sightly monster stand-offs, destruction, and inclement weather (it precipitates more than in Godzilla ‘98) that few sequences speak anything other than exposition before a thundering jolt awakens everyone to the looming danger.

Of course, it’s sheer fandom delight to see Mothra sprout wings or Rodan to snap from volcanic rock. Ferocious foe Ghidorah embodies a too-literal force of nature theme, if adding to the monster’s mystique. And then Godzilla, brutish, bulky, and massive, an appealing presence to suit his return to world-savior, hero status. All of this releases years – even decades – of pent up want to see Hollywood blow millions on a monster brawl of this stature. Both this and the vibrant Kong: Skull Island respond directly to audience feedback, and to extremes. There’s a sensational amount of monster mayhem here. All of it is worthy of letting tear ducts loose.

The people don’t matter. Charles Dance plays a new age eco-terrorist without motivation. He’s included because Godzilla: King of the Monsters needs a fatalist human catalyst, one seeking to reset civilization. Loss breeds terrorism or heroes, as is suggested here, since it uses both. Stars Kyle Chandler, Vera Farmiga, and Millie Bobby Brown meander around as audience guideposts. O’Shea Jackson Jr. needs to represent the entire US military, never finding an actual character of merit. He speaks one-liners, shoots stuff, runs, and resets to do the cycle again.

It’s often spoken in Godzilla fandom that human characters don’t matter but they do, even at the series’ lows. There’s the bullied Ichiro in the stock-footage stuffed Godzilla’s Revenge, seemingly unimportant (even obnoxious) to the Sesame Street-tier action. But he’s a victim of Japan’s industrialization. There’s an old man in Godzilla vs. Mechagodzilla, representing oppressed Okinawans, and lashing out at Japanese mainlanders. There’s substance, even in the pithiest of these movies. What’s in Godzilla: King of the Monsters is ultimately derivative, cynical, and plain.

Godzilla: King of the Monsters is giving in to summer popcorn insanity; it does that well though. If there’s a Godzilla equivalent to Avengers: Endgame this is it, and with a fraction of the movie universe build-up. Hearing iconic themes of composer Akira Ifukube as Godzilla rises from the ocean or Mothra spreads her wings cannot be deadened by the, well, deadened human end. It’s beautiful, fantastic, and enrapturing, even at the highest points of violence.

The tug-of-war comes between serving a small community of die-hard giant monster devotees and the mass audience, bending and whittling key nuclear origins components as to make box office a comfortable proposition. Imbalanced, but so, so luscious. Set expectations accordingly.

Godzilla: King of the Monsters

While limp in eye-rolling national stature, Godzilla: King of the Monsters finds its niche in displaying marvelous giant monster visuals.