J.J. Abrams set out to make an American Godzilla with Cloverfield. He did, inventing in a first-person allegory for traumatic national events. Cloverfield recreated 9/11 as Godzilla birthed a story of Hiroshima and Nagasaki.

Guillermo Del Toro then made an American Godzilla sequel with Pacific Rim, shedding much of the cultural bias for a colorful, bizarre, a bit campy, and utterly creative robots versus monsters epic.

Pacific Rim isn’t without metaphors. A failing border wall is more prescient now than upon release (Pacific Rim’s politicians crudely naming it the “Wall of Life” more so). Idris Elba’s puffy, rousing speech near the finale is a blast of American militarism, as is the nuke-driven solution to an onslaught of inter-dimensional monsters. America, of course, saves everyone.

But, the themes of international togetherness, pertinent in the plethora of Ishiro Honda-directed Godzilla follow-ups, sits at the center of Pacific Rim. A multi-cultural cast and nationally-designed robots – called Jaegers – breathes life in a sometimes overlong take on giant monster-dom. Russians drive a super-armored, tank-like ‘bot; the Koreans construct a lean, blade-driven machine. The American Jaeger slams its fists together in a baseless show of power, yet it looks extravagant and bleeds cool.

It’s all more Power Rangers than the recent Hollywood reboot too, gleefully goofy if without the teenagers. That’s also part of Godzilla lore, the 1960s marking a critical turn for kaiju culture, patterning the formula exclusively for kids, finding superheroes butting heads with weekly menaces on television. Most of those made-for-TV monsters were absurd. Pacific Rim’s creatures steer toward the reptilian, imposing and bold in their designs, and digitally choreographed to accentuate their mass. It’s beautiful.

More than anything else Pacific Rim does, it’s an absolute delight just to watch. Forgive some of the languishing pacing and eye-rolling addiction to kooky scientists. Del Toro’s affinity for dazzling light shows, impactful punches, and background thunderstorms elevates a sub-genre associated with miniatures and monster suits. The latter practically made films are gorgeous in their own way, but seeing Pacific Rim as live action when it has the colorful lust for Saturday mornings is special.

For a studio film, Pacific Rim is brazenly creative and despite the millions spent on visual effects, oddly daring. There’s no sense of veering toward Michael Bay’s overly chaotic Transformer series. At times, Pacific Rim is outright mad, drizzled with freeing scenery divorced from most of reality, exactly what a movie about post-apocalyptic kaiju warfare needs. 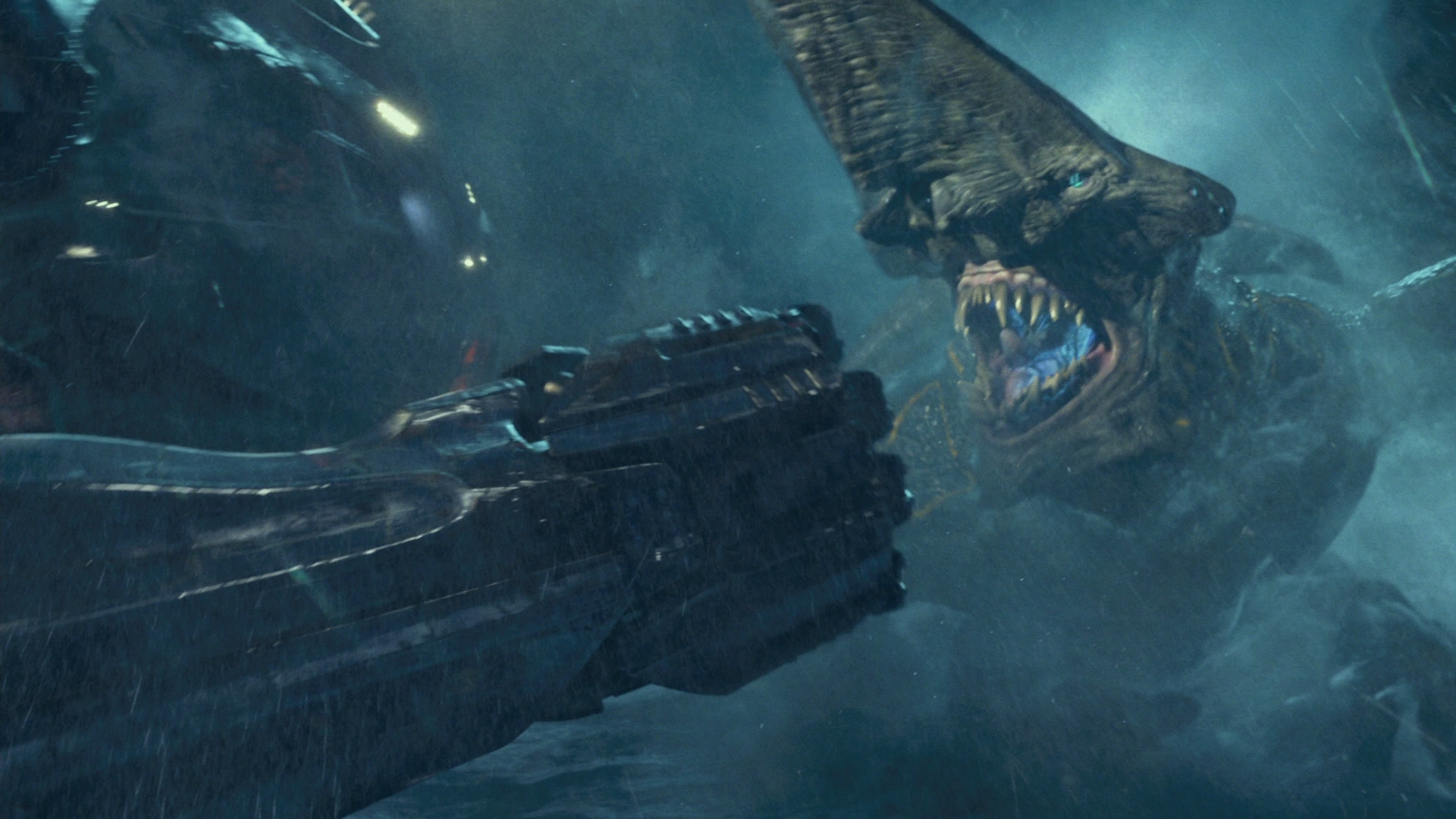 Finished at 2K, Pacific Rim is not a detail-driven disc. Texture on skin and clothes receives a minor uptick over the Blu-ray. CG scenery, likewise, reveals a tad more definition. More than fidelity, Pacific Rim is a bastion of digital clarity. A tinge of softness bleeds away without any impediment to the images. Free of noise or other issues, the screen appears like a well-cleaned window.

If the detail upgrade isn’t worth the admission – and to be clear, it’s not – then the HDR effects are. By its very nature, Pacific Rim absolutely glows. With this HDR application, it’s as if lit by the brightest Lite-Brite every produced. Every light (and Pacific Rim has thousands) glimmers and shines with dazzling intensity.

Whether in a home base where mechanics shed sparks from their tools or in Hong Kong where the light show is everything this format can be, every scene douses the scenery with brightness. It’s searing and dense, enough to serve as an easy example for how HDR enhances home viewing. Side-by-side, the Blu-ray looks outright pale.

Without being backed by black levels, this all means little. The hyper-contrasted existence of the palette requires pitch black constantly. With the benefit of added shadow details, Pacific Rim’s already reference quality depth only grows. Characters wearing all-black Jaeger suits pose no issues to Warner’s UHD. Instead, additional detail is fished from the darkest areas where crush once ruled.

Enhancement to color depth brings out the holographic displays, Hong Kong’s lights, and flesh tones. Like the detail, it’s not as impressive as a boost compared to the contrast, but it makes a difference.

A level of debris at this scale is rare, and so is the proficiency of this Dolby Atmos mix. Imaging follows Jaeger movement, splashing water rushing overhead as they push forward. Right as Pacific Rim gets underway, a kaiju smashes a bridge, sending cars toward the lens and passing through the soundfield. That’s a small taste of the audio perfection to come.

In terms of LFE, Pacific Rim sells the scale of its visuals in a perfect marriage of audio/video. The depth and differentiation between elements is mature; Jaeger footsteps sound distinct from Jaeger punches, monster roars from monsters smashing. The weight of this disc matches the top-tier of Transformers and others.

The UHD edition excises the exclusive Blu-ray bonus disc, only including the single disc with the film and featurettes. Guillermo Del Toro runs through the feature with his accented commentary, followed up with an hour of focus points. Topics range from creature design to inspiration and visual effect styles. Treat it as one piece, and you will find a deep, satisfying semi-documentary.

The unaltered images below represent the Blu-ray. For an additional uncompressed screenshots, early access to all screens (plus the 10,000+ already in our library), exclusive UHD reviews, and more, support us on Patreon.