Kong: Skull Island isn’t interested in the art of character design. It’s not entirely interested in character at all. Instead, it lets everything out, allowing the mammoth ape to take over and do what he’s done best since 1933: Cinematic escapism. It’s an often aimless and pointless movie, but Kong’s ridiculously oversized visage features in enough of this special effects-laden spectacle to make up for it. Audiences came for Kong. They get Kong and in a visual, sometimes surreal blockbuster.

Read our full review of Kong: Skull Island for more.

A 2K master doesn’t spoil the energy of this UHD. It’s spectacular. Generous helpings of detail give life to the island surroundings, sprouting miles of trees, awesome textural details on Kong, and in close, tremendous facial definition. For being rendered at 2K, the effects look richer and bolder in resolution than the source suggests. A light grain filter gives Kong a filmic look. Warner’s encode manages this digitally added layer well.

Plenty of sunsets and thick exterior lighting produce enormous levels of contrast. Kong dominates with splendid brightness and a pleasant layer of HDR. It’s not a disc going overboard with the effect. The peak is arguably during a late scene in which Kong meets Brie Larson, all set at night with outstanding shadow detail. A bit of crush in close-up is forgivable, especially when appreciating the amount of visible fur on Kong despite the low light.

Given the vintage setting, a slight sepia tint covers much of the movie. However, flesh tones still come across organically without sinking toward orange. Kong’s eclectic use of color means viewing intense sunsets, nighttime auroras, and a mix of yellow dust and green gas that bursts with saturated energy. The coloring work is fantastic on this one.

Little hampers Kong on Blu-ray. Some black crush during the few night scenes is a downer, although not severe. The level of fidelity everywhere else makes up for any loss. Close-ups work their magic, not only on human characters but Kong as well. Draped in fur, he’s a digital marvel, and the Blu-ray has the capability of managing his hide to the tiniest of details.

Flesh tones steer orange, rarely too far as to be considered egregious though. The island cinematography boasts plenty of warm greens, courtesy of a sepia tint to much of this production. Warner’s encode doesn’t struggle to render the complex scenes, managing water sprays, fast action, and fireballs sans any noticeable artifacts. Sublime contrast continues throughout the movie.

All of the jungle scenery certainly lends a hand to the 3D presentation. Peering through trees, leaves, and other objects creates fine layering. As flames light up the landscape during a late night encounter, the embers fall in front of the frame, nicely adding ambient depth. Early shots of helicopters landing on the island stand out from the landscape.

Generally though, Kong is a reserved 3D presentation. Depth holds back and in some scenes, it’s difficult to pick up any real dimension. When the characters enter the hull of the boat full of native art, the different levels barely pop. The scene begs for a bit of intensity. Moments designed to pop oddly don’t, e.g., Kong slamming helicopters down right at the camera, or swinging a boat propeller past the lens. The 3D is worth it for the highlights, but don’t expect consistency. 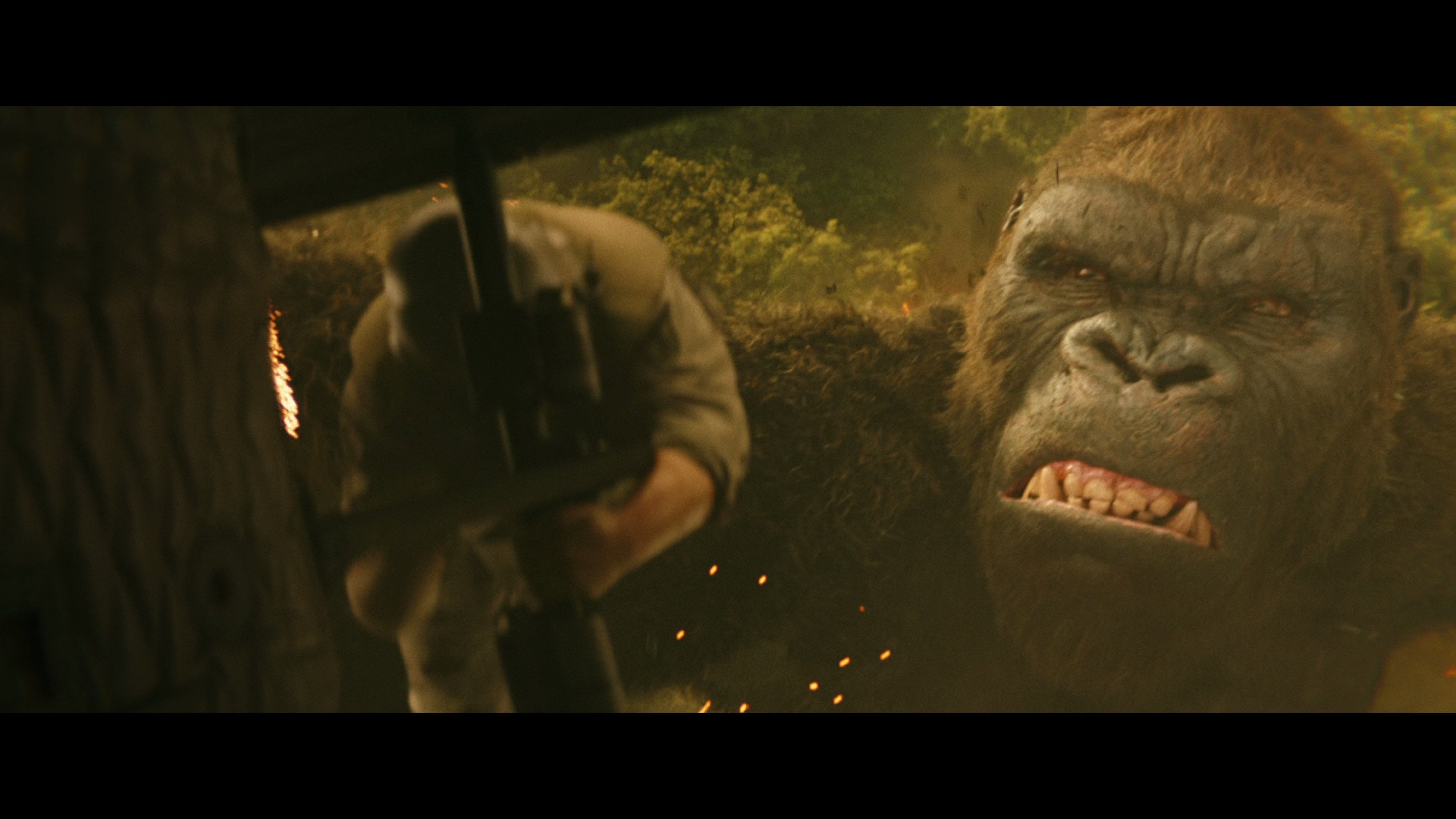 Both the Blu-ray and UHD hold Dobly Atmos, paired with a 5.1 DTS-HD track. Seems excessive. Anyway, the thumping and pounding of Kong isn’t a champion, although it certainly breaks out on occasion. Helicopters slamming together provide low-end oomph. Kong’s battles do too, if not to reference quality. Plenty of other discs do more damage.

The winning portion is entirely the spatial use, spreading between channels with constant activity. Skull Island’s jungles live on ambient noise and one of the best gags in the movie (“They sound like birds”) gets an assist from a rear speaker chirp. For a great example of attention to detail, skip to the sequence where the team works on John C. Reilly’s boat. The cranking of tools, clanging of metal, and other minor details find a home in each channel.

Of course the action is superlative. With the team trapped in a monster graveyard, a Skull Crawler pans around the soundfield. Then comes gunfire, birds, and hissing gas, a complete and total envelopment in a key action scene. Come time for Kong to rumble, sweeping effects stem from the brawling, along with the subwoofer assist to build Kong’s strength.

On the UHD, director Jordan Vogt-Roberts’ commentary sits alone. That Blu-ray matches it then adds a bevy of featurettes. Realizing an Icon opens everything, 11-minutes spent on the Kong legacy and the actors. Summoning a God focuses entirely on the visual effects side of the monsters. Peeking in on the Vietnam location shoot only takes five minutes, with a brief look at Tom Hiddleston to follow.

It turns out Brie Larson took some great set photos to stay in character. Those come up in the brief Through the Lens. A few deleted scenes (four minutes total) and a bit of “Monsterverse” building in a Monarch post-movie clip round off this Kong.

What it lacks in character, story, or anti-war sentiment, Kong: Skull Island makes up for with spectacular action sequences.

The 15 unaltered images below represent the Blu-ray. For an additional 35 Kong: Skull Island screenshots, early access to all screens (plus the 6,000+ already in our library), exclusive UHD reviews, and more, support us on Patreon.