A Flash Through Time

Supervillain Cicada is The Flash’s fifth season weakpoint. Not the character necessarily, but Chris Klien’s grumbling performance and artificially projected anger. A capable foe for Barry Allen and company, if dismal in casting.

By luck, The Flash team counters with Jessica Parker Kennedy as Nora Allen. Call it draw then for new recuits. Kennedy is a delight after arriving as Barry and Iris’ daughter from the future, uprooting the show’s comfortable family grounding. For the CW’s younger target audience, Nora draws on teenage drama, yet doesn’t go so far as to fall into cliché angst; time travel keeps family problems unstable in The Flash’s best ways.

Things simmer down this season. The Flash finds time for camp antics, but the storyline involves a child in a coma and deep resentment within Team Flash’s ranks. And, Ralph Dibney (Hartley Sawyer) returns, grating in season four, now toned down with a legitimate dramatic arc. A potential cure for meta-humans creates identity struggles, with some on Team Flash considering who they are. Using comic book fantasy, this season of Flash is able to reflect issues of sexual orientation and gender identity, the same as X-Men slices through Civil Rights.

Flash is able to reflect issues of sexual orientation and gender identity, the same as X-Men slices through Civil Rights

Although the series seems to write itself out of trouble with time twisting flash forwards, flashbacks, and alternate worlds, The Flash readily returns to season one with regularity. Barry’s decision to use time in an attempt to save his mother continues to press on these storylines. It’s smart. Better, Barry is forced to confront his selfishness that repeatedly creates victims and villains. Here in season five, the wrap-around narrative reaches a clever crescendo.

Season five is too long. So was four, three, two, and one. The nature of network TV means carrying 20+ hours of story material, crushing pace and necessitating filler. A few episodes in season five exist merely to drive side characters and bit parts, with but a passing mention of Cicada or the plan to stop him. Knowing The Flash, those seemingly meaningless episodes will create a calamity two or three seasons from now.

Yet, entertainment value buffs out the nicks. The Flash’s immensely colorful action hasn’t lost its hook, and the show is still populated by carefully drawn mainline personalities striving to do right if continually stuck in moral dilemmas. Facing those issues keeps this show engaging. 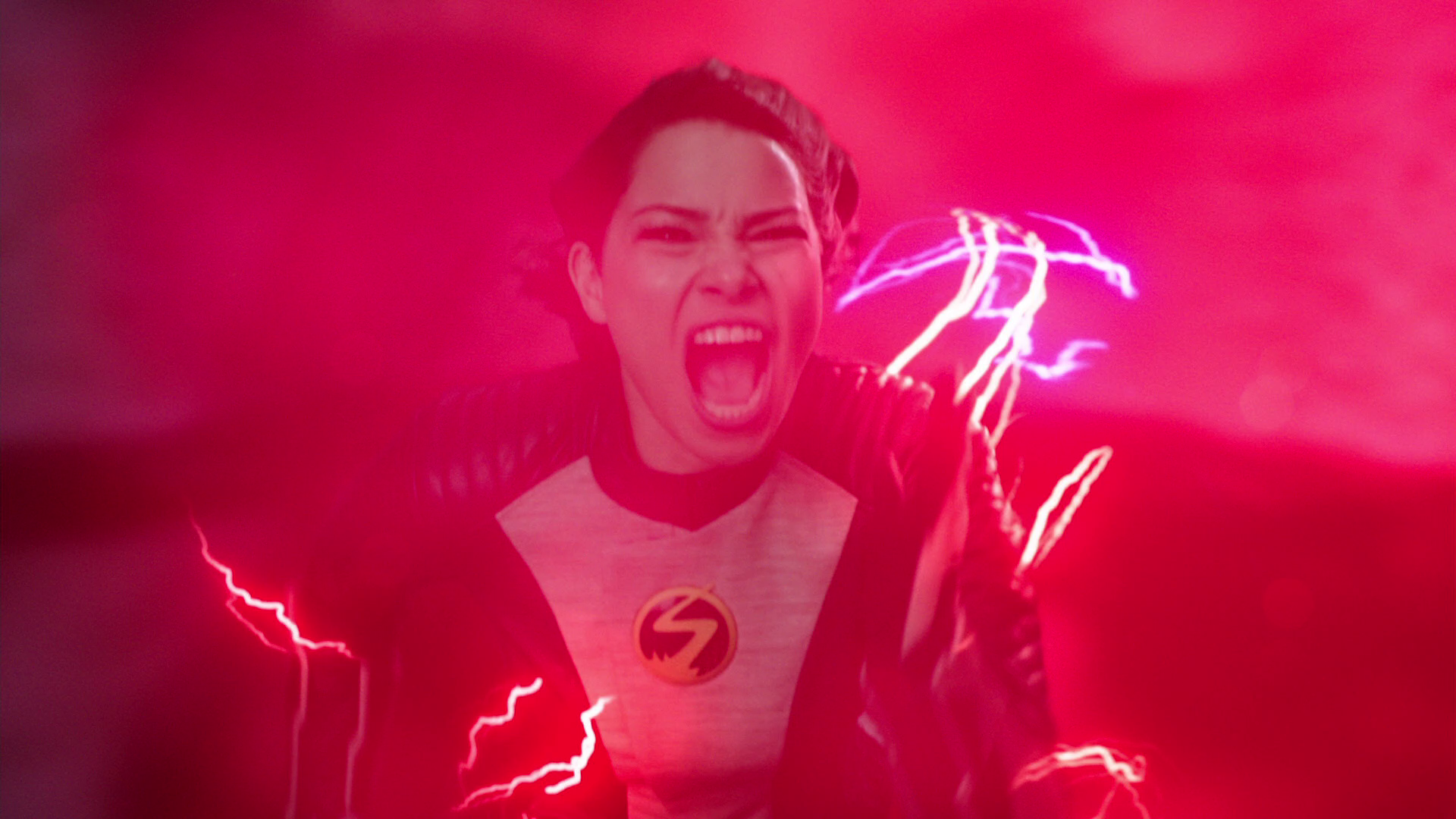 Spread across four discs, the 24 episodes struggle slightly with compression. Noise invades shadows, that causing artifacting choke points where digital swarms gather. Rarely does this impact detail though. Although softer than usual (when compared to previous seasons of Flash), it’s well textured imagery. Even the digital effects when panning over Star Labs hold up, with no aliasing to note.

The Flash makes a case for TV’s eventual transition to HDR. All of the lightning and speedster trails create intense brightness. For Blu-ray, the pop is high-grade, but it’s a wonder what those extra nits could do. Overall contrast matches Flash’s tone: perky. Black levels capture exterior night cinematography with depth.

This is a show of color too, with red, yellow, and blue suits, all dazzling in their saturation. Super powers bring out every hue.

In the low-end, slow motion generates a solid buzz with the occasional explosion taking things further. As is the norm in TV mixing, full extension is rare, yet keeps The Flash on consistent footing.

On disc one, Warner loads some deleted scenes (and each disc carries some), a featurette titled The Evolution of Killer Frost (running 11-minutes) and a compilation of Comic Con highlights covering each of DC’s shows, not only The Flash. This runs an hour.

Disc two includes a lengthy 45-minute talk on the Elseworlds crossover episodes. Move to disc three for Modes of Persuasion, a 38-minute look at DC TV’s villains. Disc four is awfully lonely, with an eight-minute gag reel, but as with previous seasons, it’s gold.

Although saddled with a meager villain for most of season five, The Flash is back to form with an engaging family drama.

The 15 unaltered images below represent the Blu-ray. For an additional 25 Flash: Season Five screenshots, early access to all screens (plus the 100,000+ already in our library), 75+ exclusive 4K UHD reviews, and more, support us on Patreon.