At one point in Disney/Pixar’s Up, Carl Fredricksen is trying to save Russell, his young companion, from falling off a giant blimp. Russell, tied to a chair, is unable to help Carl, but proclaims he wants to. Carl responds with, “I don’t want you to help. I want you to be safe!”

It is one of those movies lines that expertly tells the audience how far the character has come. Carl (voiced by Ed Asner) starts the movie angry at the world due to a construction project that threatens his home, and saddened by the loss of his wife. The opening montage tells the story of how their relationship grew through the years before Ellie’s passing. This is flawless, deeply moving, and heart breaking as it deals with the miscarriage of their only child through visuals and music alone.

As the movie continues, Carl is able to finally let go. His adventure, one that sees him moving his home from New York to South America as his wife Ellie wanted before she passed, is more of a story about finding positive things left to see in life. Carl’s inner child, one obsessed with adventure, is able to take hold when he inadvertently brings Russell along for the ride.

Their South American trip is filled with few characters, but wonderfully realized adventure. Charles Muntz, an explorer who inspired Carl as a child, lives in the South American jungle searching for a rare bird. He has created an army of dogs able to speak via special collars. One of the dogs, Dug, befriends the odd pairing of Carl and Russell. The bird also finds them, named Kevin.

The foursome are colorful characters, filled with personality. Part of that is Pixar’s incredible animation. The smallest of touches, such as Carl bobbing up and down as his motorized chair moves down steps, bring these characters to life. The other part is filled with writing, comedic timing, and the cast’s ability to handle the material.

Most importantly, Up never shies away from difficult material. Before the finale aboard Muntz’s airship, Carl sits down in his house, now residing near the waterfall as intended. He opens Ellie’s adventure book for one final memory with his wife. A beautiful piano theme by Michael Giacchino plays in the background, perfectly suited to this somber and important moment. Color is drained from the scene, reintroduced through a series of photos before Carl realizes he must continue.

Up is that rare film that in many circles could be considered perfect. It is hard to find any fault, and while you could nitpick that dogs flying biplanes is going too far, it’s the Jaws effect.

No one cares that the tank inside the shark’s mouth would never explode when shot, let alone that the shark never would have attacked like that in the first place. You’re engrossed in the film, swept up by the story, the characters, and the action to care about logic. It is fully realized fantasy. Up has that same effect, and its touching final shot, that of the house resting perfectly on the waterfall ridge where Ellie wanted it, is perfect. 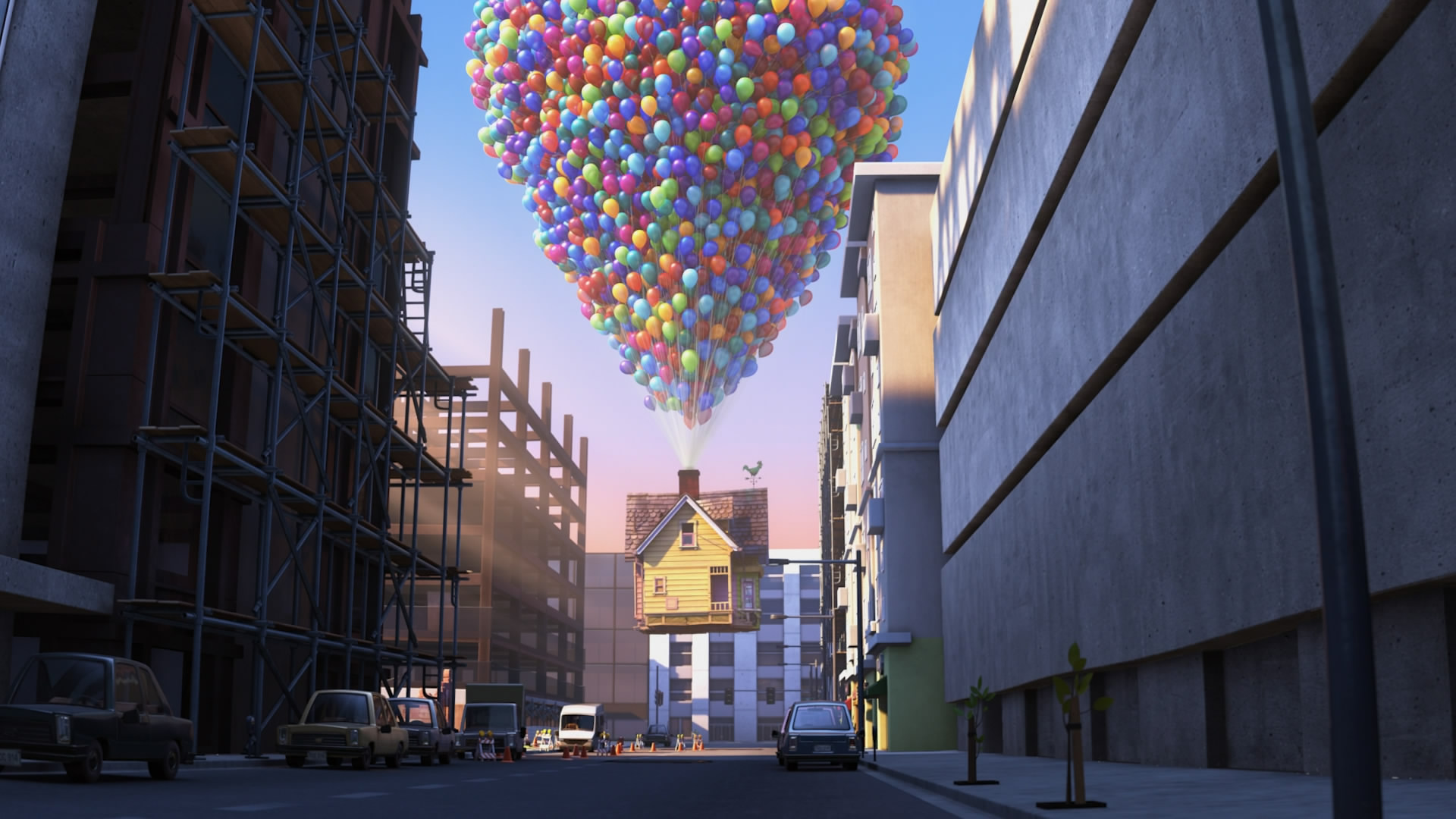 Pixar sucks. The continue to push this format forward with such lightning speed and aggressiveness, everything else is flat by comparison when studios try to keep up. Up is yet another reference quality transfer from the studio, one that holds a single flaw so minute, it’s a desperate attempt to say something negative to appease purists:

The bill of Russell’s hat shows some minor aliasing.

That’s it. One. Single. Solitary. Complaint. This is a breathtaking AVC encode, one that bursts with jaw dropping color. The balloons that lift Carl’s house are truly a sight to see, flooded with bold primaries that are amongst the richest yet seen. Depth of the image makes you forget that a 3-D version of the film is not included. It doesn’t need one, as the black levels and bright contrast maintain a wonderful dimensional feel that cardboard glasses would only dilute.

The massive amount of razor sharp textures in the film are maintained flawlessly. The montage of Carl’s ties show a variety of styles, each one with a specific type of stitching this transfer is able to showcase. Darker scenes are amongst the best, particularly a campfire scene lit only by the flame. Contrast and black levels are rarely calibrated with such perfection. Even scenes intentionally softened by light have zero problems. Utterly remarkable.

Pixar delivers an immersive, enveloping DTS-HD ES mix for Up, which like the video, does not disappoint. While the jungle environment is surprisingly limited in terms of ambiance, few scenes in Up are lacking something of note. The front soundstage is incredibly well spaced, with a consistent stream of positional dialogue or movement.

Surrounds are quite active, with Kevin and Doug routinely running around the frame. Their movements are superbly tracked. The house, being pulled behind the explorers, is constantly making small creaking sounds as its frame is being tugged. A thunderstorm marks the first demo sequence, the floating house entering a patch of dark clouds tossing thunder and rain in each channel. The highs are spectacularly crisp, and the low-end jolts from the thunder are fantastic.

Likewise, action scenes later deliver deep bass. The loudest, strongest moment comes as rocks collapse on each other during a chase. Rubble also fills the soundfield here. The film has few dull moments, and during those times, the score nicely bleeds into all channels.

Crammed is a way to describe the Blu-ray case, holding four (!) discs inside: one for the movie, one extras disc, the digital copy, and then the DVD version of the film. Beginning on disc one, a commentary track (called CinExplore) with writer/directors Peter Docter and Bob Peterson kicks things off. This pulls various artwork to show on screen as the discussion moves on, and is surprisingly somber, although appropriate for the subject matter.

The short included with the theatrical release, Partly Cloudly is here as expected. It is arguably one of the best of the Pixar’s shorts to date. Dug’s Secret Mission is a brief short that fills in a part of the movie not shown, and in some ways could be viewed as a deleted scene. Adventure is Out There looks at the research done for the locations in the South American jungles.

The Many Endings of Muntz looks at the various ways the finale could have been handled, followed by trailers and typical BD-Live support. On to the second disc, a selection titled Documentaries runs for around 44 minutes total, each piece averaging (roughly) six minutes. This is where the technical details come into play, from textures, to lighting and physics. These probably could have been combined into one, but it is a minor issue.

A brief deleted scene looks at the opening montage of the film, and what could have been included (but was wisely cut). Brief promotional clips, trailers, and a game that requires BD-Live to access round off this superb, involved, and detailed set of bonus features.