Nick Cave’s devoted fans will find many pleasures in the intimately staged docudrama 20,000 Days On Earth. Passing as a revealing dramatization in one narrative day of Cave’s life as cult musician, songwriter and husband, the film delves into his artistic process while showcasing a glimpse at his intense performances. A few old friends pop in and out like actor Ray Winstone and singer Kylie Minogue in dream-like cameos.

More than a documentary but less than a biopic, Nick Cave allows a peek behind the curtain into his own life and career. This is far more intimate and inventive than what we usually get from music films. We see the wordsmith record new material for the Bad Seeds, answer his voice mail, and meet a therapist who gets the musician reminiscing about his earliest sexual experiences. There’s a telling anecdote as Cave recalls his father reading him Lolita as a child.

20,000 Days on Earth is a delight for fans and clever enough to please even people who’ve never heard Nick Cave before

The lead singer of the Birthday Party and later for the Bad Seeds, the gifted songwriter has dabbled in composing scores for Hollywood (The Assassination of Jesse James By That Coward Robert Ford), acting, and even writing screenplays. His music is often an acquired taste but he’s built a devoted fandom going back to the 1980s.

Co-directors Iain Forsyth and Jane Pollard stage the documentary as a chronicle of the 20,000th day in Cave’s life in virtuoso fashion. The rock music iconoclast receives a stunning treatment of sight and sound, capturing his fierce performing and raw gifts crafting a new song in candid clarity.

Hugely popular in the British music press, Cave is first seen waking with his wife Susie from slumber. Nick goes through his daily routines while meeting friends like his close musical collaborator Warren Ellis. They share joint memories together in a kitchen chat, recalling a wild time performing with Nina Simone in concert. It culminates in a jaw-dropping performance at the Sydney Opera House.

The film is brilliantly cut and edited, lucidly deconstructing what makes Nick Cave tick and offering a glimpse into his personality we rarely get with documentaries covering music stars. There’s an air of mystery and mystique which glorifies his talents while also humanizing the star, a neat trick.

The directors weave a lyrical portrait of Nick Cave’s songwriting and performing with remarkable skill. Avoiding all the pitfalls of the usual banalities in music docs, 20,000 Days on Earth is a delight for fans and clever enough to please even people who’ve never heard Nick Cave before. 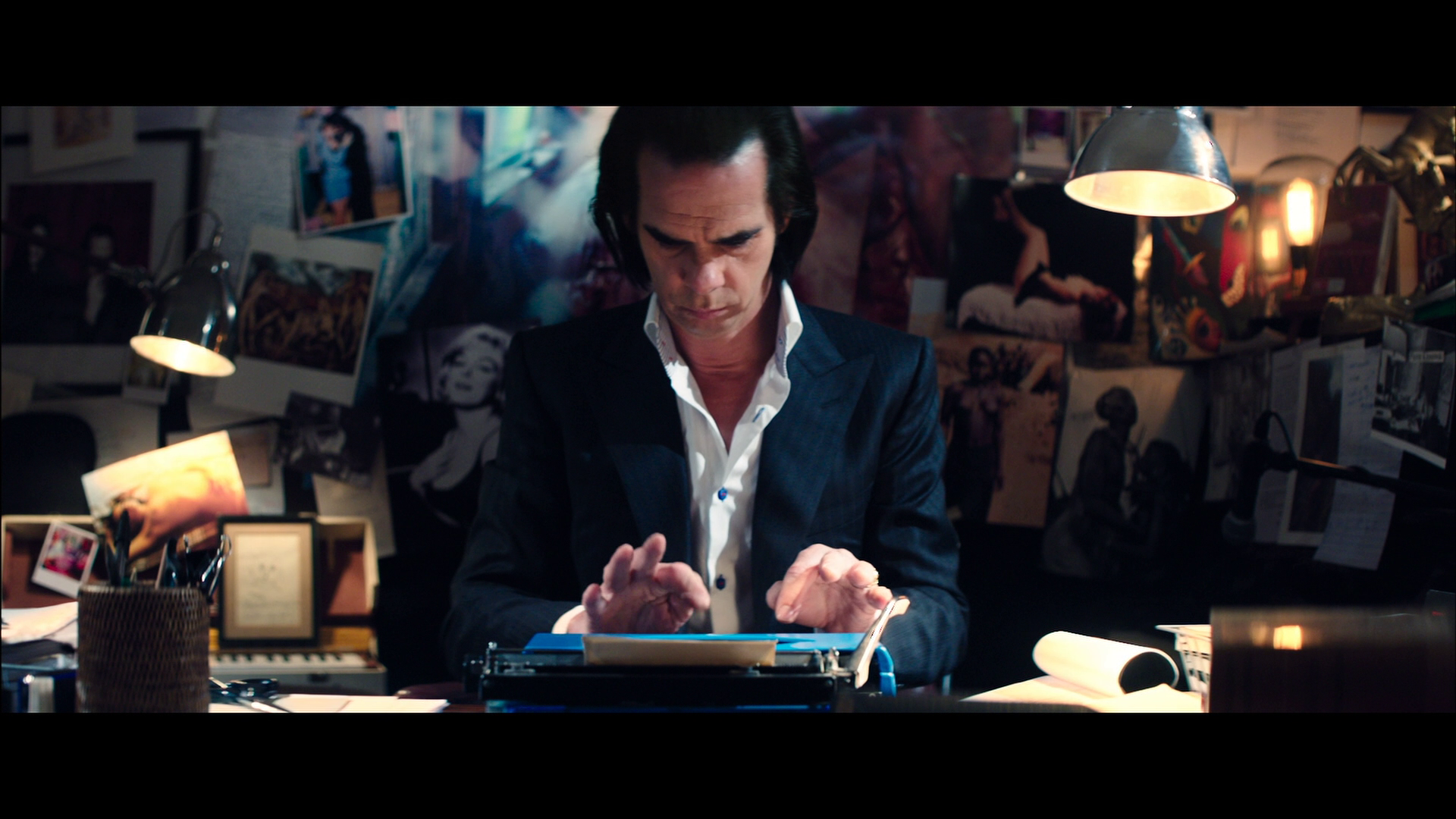 Struck from a digital intermediate, the 2.39:1 presentation reflects the moody intentions of cinematographer Erik Wilson (Paddington). Digitally filmed with the Arri Alexa, the behind-the-scenes recording session footage and the live musical performance are brimming with depth and razor-sharp definition.

Interviews and guest appearances have a little more atmosphere to them, mildly limiting shadow delineation and fine detail. Kylie Minogue’s appearance in the back of a car uses shadow and light to obscure her features.

The artsy feel isn’t a problem for the decent picture quality. Black levels are serviceable with only minor crushing, while contrast and color saturation are often excellent.

The 1080p video is encoded in modest AVC on a BD-25. Artifacts are a small issue in busier scenes. The 97-minute main feature incorporates older archival footage and video, not to mention darker locales with less available lighting.

The highlight for many in 20,000 Days on Earth will be Nick Cave’s powerful performance at the Sydney Opera House, which caps the documentary as it finishes off the creative cycle of a song from an early idea in the recording studio to performing live before a crowd.

The 5.1 DTS-HD MA surround mix is nicely put together with careful separation and cleanly intelligible dialogue. Dynamics are rugged, offering enough low-end in a spacious soundstage. A lot of effort has been put into meshing different sounds from Nick’s life into the soundtrack, entirely composed by Warren Ellis and Nick himself.

Optional English SDH subtitles play in a white font, inside the scope presentation.

MVD reissues 20,000 Days On Earth on Blu-ray after Drafthouse Films issued the film back in 2014. The problem here is that all the bonus features from the earlier BD are left off, including nearly 35 minutes of deleted material. Hardcore fans of the Brighton musician should hunt down the earlier disc.

The disc is listed as Region A.

An absorbing, introspective peek into Nick Cave’s life and creative process by the man himself, staged more as high-flying performance art than your standard music documentary.