If there’s a core problem within Multiverse of Madness, it’s Doctor Strange (Benedict Cumberbatch) himself whose few quandaries in this surrealist adventure matter so little. Anything of interest comes from the adversarial Wanda Maximoff/Scarlet Witch (Elizabeth Olsen), who tears down entire universes to find her children. The instinctual lure to motherhood shatters any rationale; a need to pair herself to a universe with her kids feel wholly powerful.

… at Multiverse of Madness’ heart is a suitably vicious contempt

The villainy arises from purely social urges, that a woman will live unfulfilled unless she gives birth. In our ‘verse, Wanda never had a baby, but knows other Wandas did. That’s her fight, and at Multiverse of Madness’ heart is a suitably vicious contempt for those who refuse to relent, and judge those who choose to live childless.

But then it’s also a Sam Raimi-directed flick, with a script effectively twisted into an Evil Dead sequel, if even a lifeless remake. Doctor Strange is a challenging protagonist in that his powers lack sensible grounding. He can do anything, and in battling Scarlet Witch, the two sling tirelessly ill-defined mystical spells toward one another, if providing zero emotional stakes. It’s a long-standing fantasy conundrum – in the fist major battle, Strange fights a demon eyeball, slashing off a tentacle. It’s a wonder he doesn’t just continue doing so, or just slice the eye. The entire sequence feels false and hollow in tension.

Multiverse of Madness also introduces American Chavez (Xochitl Gomez), another character written with more interest/focus than Strange. Her abilities can conjure travel to other realities, making her desirable to evil forces seeking to rule all existence. She’s unique, if also an almost certain cop-out somewhere later in Marvel’s lore as these films write themselves into a creative corner. Chavez can warp to a similar universe, resetting everything to keep the sequels rolling. 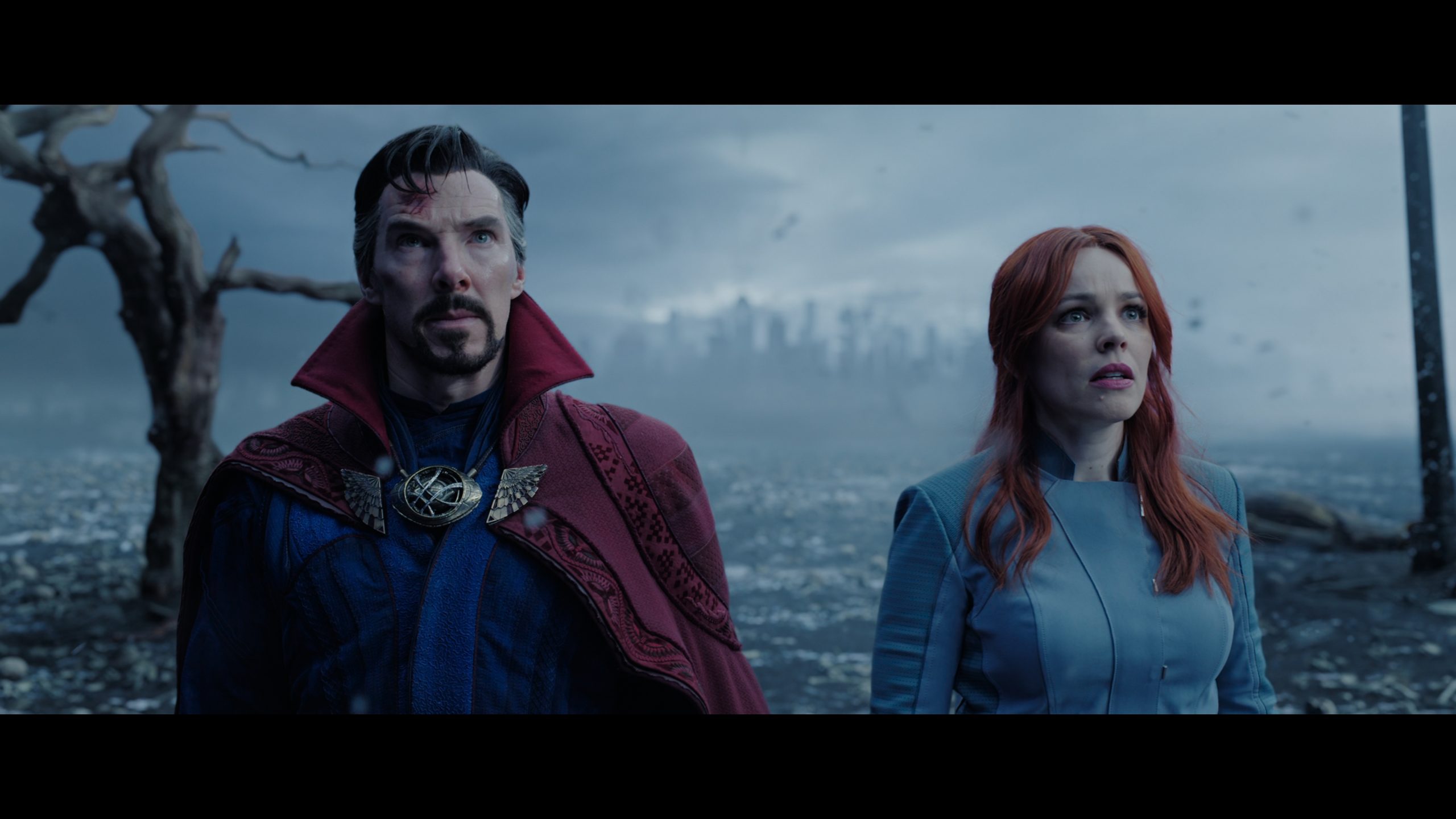 A routine, soft 2K digital source upscales cleanly enough to 4K. There are no anomalies like aliasing, and detail can jump forward in a noticeable manner. Texture shows on faces and the wild visual effects. Fidelity pops when given the chance.

The real save comes from HDR, blasting the screen in a blinding brightness. Intensity stays a regular high point, Multiverse of Madness truly glowing even during basic dialog scenes. When Strange (and others) begin firing off spells in bunches, their vividness reaches reference grade. Black levels? Also brilliant, if at times veering toward crush.

Splendid Atmos mixing uses the full soundstage, debris sweeping around the rears, stereos, and heights with brilliant frequency. Accuracy is stellar. Motion is a near constant given the action’s extent. If there’s a complaint, city ambiance lacks the same qualities during downtime, but that’s minor.

By Disney standards, low-end support produces a beefy response, although still less compared to rival studios/similar content. A dense rumble brings weight to the magical spells, if loosely mixed, without the crushing weight expected from blockbusters. Regardless, Multiverse of Madness is a solid, consistent performer.

Disney loads only the Blu-ray with these bonuses. This includes a commentary led by Sam Raimi, co-producer Richie Palmer, and writer Michael Waldron. A brief gag reel is followed by three deleted scenes. Then, a trio of featurettes.

Doctor Strange and the Multiverse of Madness

Multiverse of Madness’ endless array of magic spells, action, and chaos is ceaseless to a point of boredom, even as the eccentric Sam Raimi touches peer through.