Scoring ten Oscar nominations, Giant would be James Dean’s last screen role. He died in a car accident after completing this showy role in a prestige picture.

Giant works, and works well when Elizabeth Taylor is on screen

Nominated for ten Academy Awards, Giant is definitely of its era and a little dated by today’s slicker storytelling. Based on a book by Edna Ferber, it’s an overwrought tale of love and power between cattle barons and oil tycoons, focused on one Texas family.

Jordan ‘Bick’ Benedict Jr. (Rock Hudson) is a wealthy cattle rancher from Texas who marries the privileged Leslie (Elizabeth Taylor) from back East. When the couple returns to Texas to begin their family, Leslie finds life there much different and more difficult than her sheltered aristocratic upbringing.

Poor cowboy Jett Rink (James Dean) gives a searing performance as a man who moves from rags to riches over the decades. Dean has incredibly palpable screen chemistry with Taylor, their characters caught in an unrequited love triangle. Inheriting a small piece of land from Bick’s beloved sister, Rink ultimately becomes a wealthy oil baron at odds with the Benedict family.

The conflicts in Giant revolve around race, class and the changing life of Texas, as the state transitions from cowboys to oil. It’s about the community surrounding the Benedict ranch as much as anything else, with Bick and Leslie’s children growing into adults. They endure the changing landscape in Texas as Dennis Hopper plays their oldest son, who forsakes the family business by becoming a doctor.

Giant works, and works well, when Elizabeth Taylor is on screen. It may be her best role, carrying what can often be a hammy and predictable story. The screenplay is fairly modern in perspective and Taylor’s Leslie is a critical protagonist.

Hudson’s more traditional male lead almost feels like an afterthought next to Leslie’s fire. Jett Rink’s character arc gives James Dean a lot of red meat which he ably devours. However, Stevens bites off more than he can chew in the epic. Giant’s sheer length can be a drag and often feels like a movie crammed together with its sequel. The final act picks up decades later, aging up the entire cast and introducing new characters. By the end, most will feel exhausted.

Giant isn’t quite the classic it’s portrayed to be but George Stevens wrung enough Hollywood charm from his three leading stars for a rewarding journey. 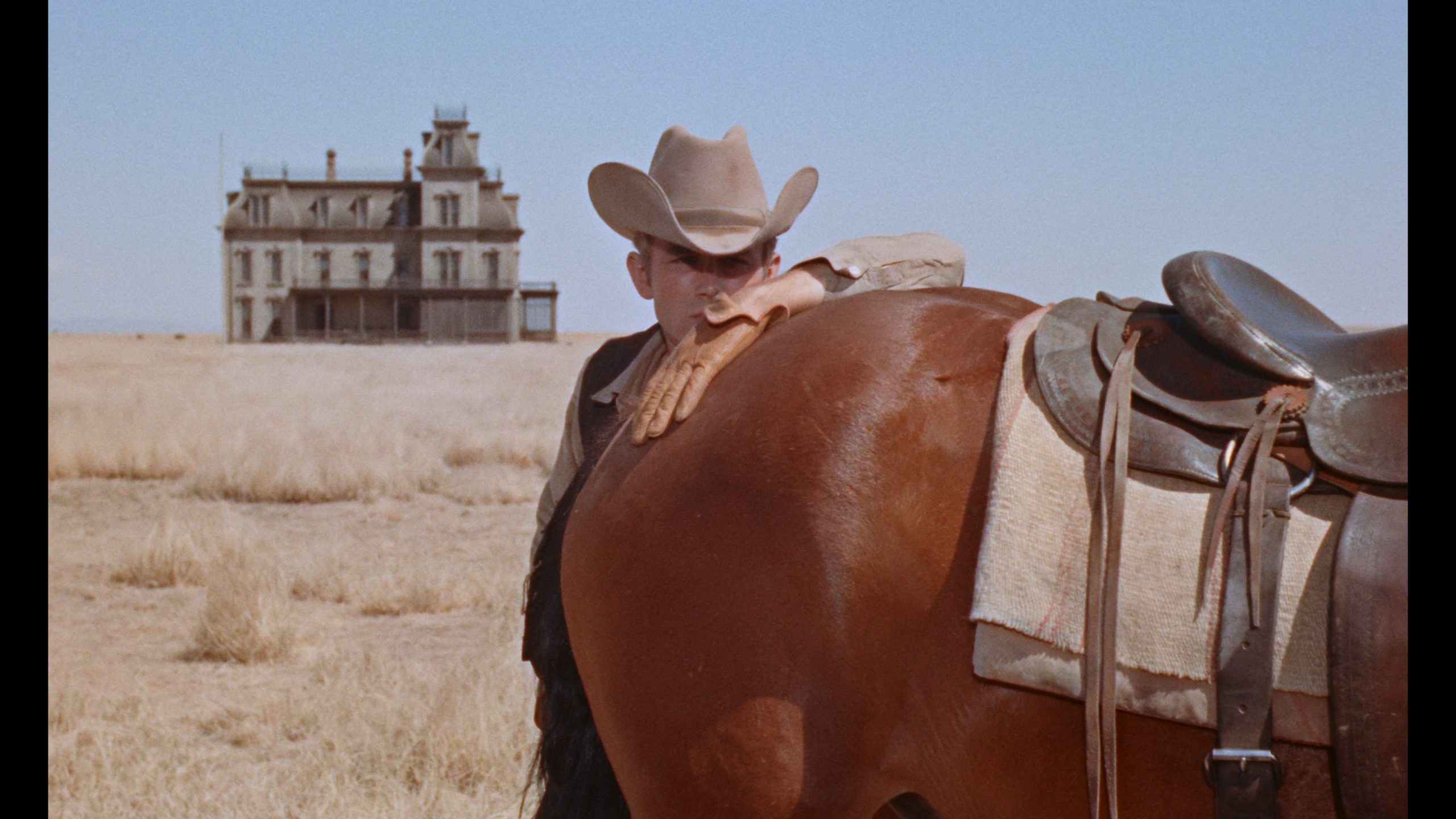 Filmed in Warner Color, WB’s term for Eastman Color, it was a cheaper color process than Technicolor and shows in this new 4K restoration from Warner.

Giant always had optical printing issues with a variety of problems plaguing its original film elements. Dissolves and major optical effects are often problematic. The folks at Warner have done everything possible to work with what they have in bringing Giant out on UHD.

The main feature, running well over three hours, gets an entire triple-layer UHD to itself. There are no complaints with the rock-steady compression, rendering the film grain and texture with the utmost clarity. It may be the biggest improvement in any attribute over the now-dated Blu-ray.

The movie’s 1.66:1 presentation is mixed. Some splendid material is mixed into any number of underwhelming scenes. It’s a mostly film-like transfer of troubled source material with an inconsistent HDR10 pass. The palette doesn’t always benefit in HDR, which pulls pinks and greens to the forefront.

Here’s what Warner themselves describes for this new UHD:

“The new 4K restoration was completed sourcing both the original camera negatives and protection RGB separation master positives for the best possible image, and color corrected in high dynamic range for the latest picture display technology.”

The new transfer was finished in league with the Film Foundation and George Stevens Jr. The newer color correction certainly enriches select scenes in 4K resolution. There is tighter grain reproduction and finer detail available than preceding versions. The scenes set in Maryland pop off the screen in lush colors with deeply saturated greens and reds.

This is more saturated than earlier efforts for Giant with sharper highlights and deeper contrasts. The film looks decent at 2160p resolution with a few gorgeous scenes standing out. The scenic cinematography holds up fairly well, even the more expansive Texas ranch shots. Interiors are actually softer with less razor-sharp definition. Black levels maintain an inky appearance.

Giant appears to have been shot with its stars in mind, especially Elizabeth Taylor. Her blue eyes dazzle in softly lit close-ups. The transfer overall has touches of video processing, primarily unnoticeable. Absolute fine detail isn’t quite as beautiful as some other UHD showcases like Singin’ In The Rain.

Giant’s audio is capably reproduced in 2.0 DTS-HD MA. The audio was sourced primarily from a 1995 protection copy of the original magnetic mono soundtrack and may in fact be a reissue of the Blu-ray soundtrack.

The stereo mix preserves the original monaural audio’s primary intent with solid staging and presence. Dialogue is cleanly replicated without problems. Has the track been filtered? Possibly, there’s less hiss than expected and the mid-range has a boxy quality which doesn’t scream extended dynamics.

Warner has chosen a curious strategy for Giant’s 4K release. Other than the ancient commentary carried over from DVD, no special features are included. Giant’s three-disc Blu-ray DigiBook release was stuffed with special features and lengthy documentaries. It may be why they’ve released this 4K UHD without a companion BD included.

It does come with a Movies Anywhere digital copy, redeemable in UHD quality on all MA providers.

Elizabeth Taylor dazzles in this George Stevens’ Oscar-nominated epic in what would be James Dean’s last film role.

The following six screen shots serve as a small sample for our subscription-exclusive set of 58 full resolution, uncompressed 4K screen shots grabbed directly from the UHD: