Freely admitting it’s nothing more than a star vehicle for Channing Tatum and Sandra Bullock, there’s little surprising about The Lost City as it plays out as a quasi-remake of Romancing the Stone, which in turn recreated the ‘30s and ‘40s era lost island movies (plus Indiana Jones of course).

With its first scene, Lost City lays out its personality. Surrounded by snakes in an ancient temple, Bullock and Tatum question the logic of where these snakes come from and who feeds them. And, why they don’t attack the henchmen holding the heroes at bay. It’s pulpy idiocy, and Lost City loves it.

Lost City skirts by with a PG-13, teetering on the R

Lost City skirts by with a PG-13, teetering on the R, but like a giggling grade school child, just enjoys the cheap humor. Originally titled Lost City of D, that was shortened unfortunately, and the joke remains in the dialog instead. If there’s a sense of where Lost City is headed, that’s it.

Every scenario plays up the cliches, and Lost City is so eager to entertain, somewhere near 30% of the dialog is dubbed in post, adding jokes where possible as character’s walk away or their lips go unseen. Luckily, they’re funny gags, and while precisely delivered as expected, they land. It’s joyously stupid and juvenile without apologies.

This isn’t a two-some showcase; Daniel Radcliffe as a billionaire villain trying to uncover a lost crown is genuinely brilliant and Brad Pitt as a calm super soldier plays up Hollywood stereotypes. Lost City has a blast exploiting gender norms through this cast, suitably old fashioned as Tatum/Pitt attempt their masculine rescue, yet it’s Bullock handling things whenever she has opportunity. Tatum’s emasculated, brainless dope routine stays right in that lane, if suited perfectly to this shameless comedy.

There’s no fear in Lost City’s methods, and the humor is akin to a TikTok video, tossing out random reactionary lines, forever thankful for fierce sarcasm. While never memorable, Lost City undoubtedly proves itself worthy for a rewatch every few years just to reconnect with these moronic hi-jinks. 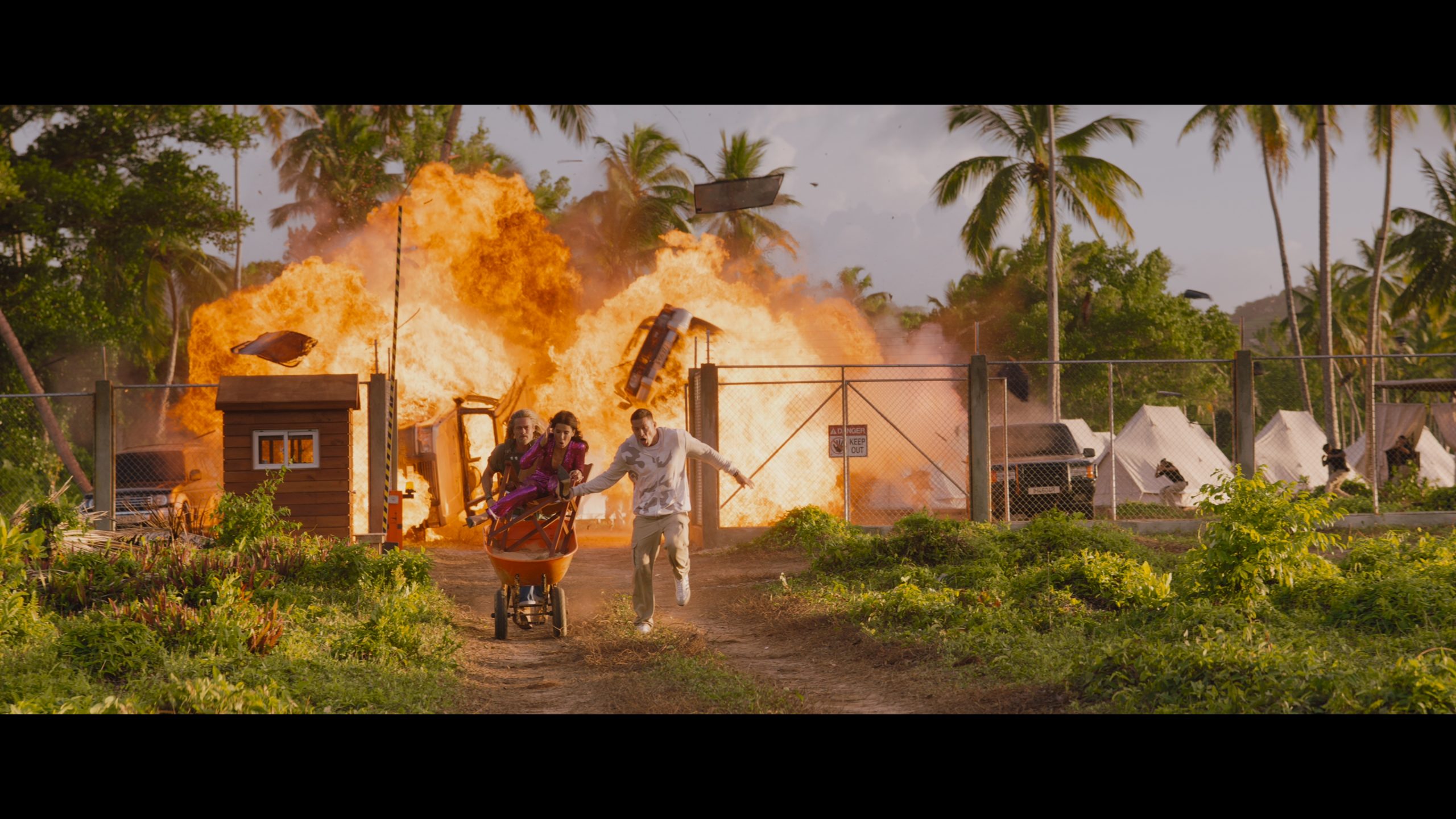 An average 2K upscale drives decent enough detail into the frame. General softness is typical for a digital source like this, including the effects shots. Lack of resolution aside, Lost City looks wholly pristine. There’s not a spot of noise anywhere; it’s absolute clarity.

What helps? The intense color, giving flesh tones intensity and primaries pop. Saturation stays high alongside an amber push, especially in the jungle. This doesn’t dilute the overall beauty or purity.

While a few moments have fun with the soundstage, Lost City’s Atmos track is rather passe. Surrounds elevate, even exaggerate in places, drawing too much attention to themselves. Jungle ambiance stays unusually low for a movie like this, preferring the stereos. Gun fire travels well though. Sniper bullets jump from the rears to the fronts accurately, and a reverb echoes through the air. Motorcycles pan around as they chase the heroes, panning precisely.

Decent enough bass throbs. Explosions use the subwoofer potently. It’s a solid rumble, if routine. Then comes the finale inside a volcano, where Lost City begins to, literally and figuratively, erupt. LFE power grows (lowers?) to impressive power.

Seven short EPK style featurettes aren’t worth the time. Deleted scenes and a fun blooper reel offer some value. Note everything is contained on the Blu-ray and UHD.

The Lost City has a blast with its pulpy story, generating constant laughs as the cliches keep piling up unashamedly.