Just for One Day…

Hero uses a blended genre style for its rebellious tale. There’s the new wave energy, pure ‘90s in its erratic edits and inventive choreography. But there’s still classic Shaw Brothers too, with protagonist Ma Wing-Jing (Takeshi Kaneshiro) so overtly powerful, he can break fingers merely by pushing against an opponent’s fist. That’s the nationalist slant in full view.

At times, watching Hero is akin to watching The Matrix; the influence is undeniably there, even if Hero isn’t alone in that regard. Spinning slow motion gunfights and one-versus-eighty ax brawl carry the Hollywood hallmarks that soon redefined the action genre. By the end, Hero invokes John Woo via a shootout to outrageously elaborate, the only missing piece is a flock of doves.

While the theme remains timeless (Wing-Jing’s rise and fall is fiercely linked to his pushback against British imperialism, as in the original inspiration, Boxer from Shantun), the end product is awash in dated methods and techniques. The generic synth score sounds pulled from the early ‘90s, not 1997. Angular camerwork zooms and pans aggressively in the MTV music video aesthetic, robbing the fight design of maturity. Then again, the often outlandish – if creative – scuffles require significant editing to piece together, if not the drama that still cuts away for flashbacks or multi-tiered storytelling.

In its domestic release, Hero spoke to the audience. Borrowing the freshness of western cinema yet paired to to the Hong Kong flair, there’s pride in this work. The villains concern themselves with easy money from the British when attempting to grain power, and Wing-Jing’s struggles represent an entire country’s continued anxieties toward remaining their own nation. That’s typical Shaw Brothers scripting, and this remake only changes the visual panache, with an additional link to pop music, which again, borrows the marketing effect from western cinema.

A corny romance filters in, giving Wing-Jing purpose as he unravels and drifts toward criminality. This allows lean character definition to sprinkle in, yet Hero is well aware the attacks, the shooting, and swordplay are the focus. There’s plenty of all three, if overcooked each time out. 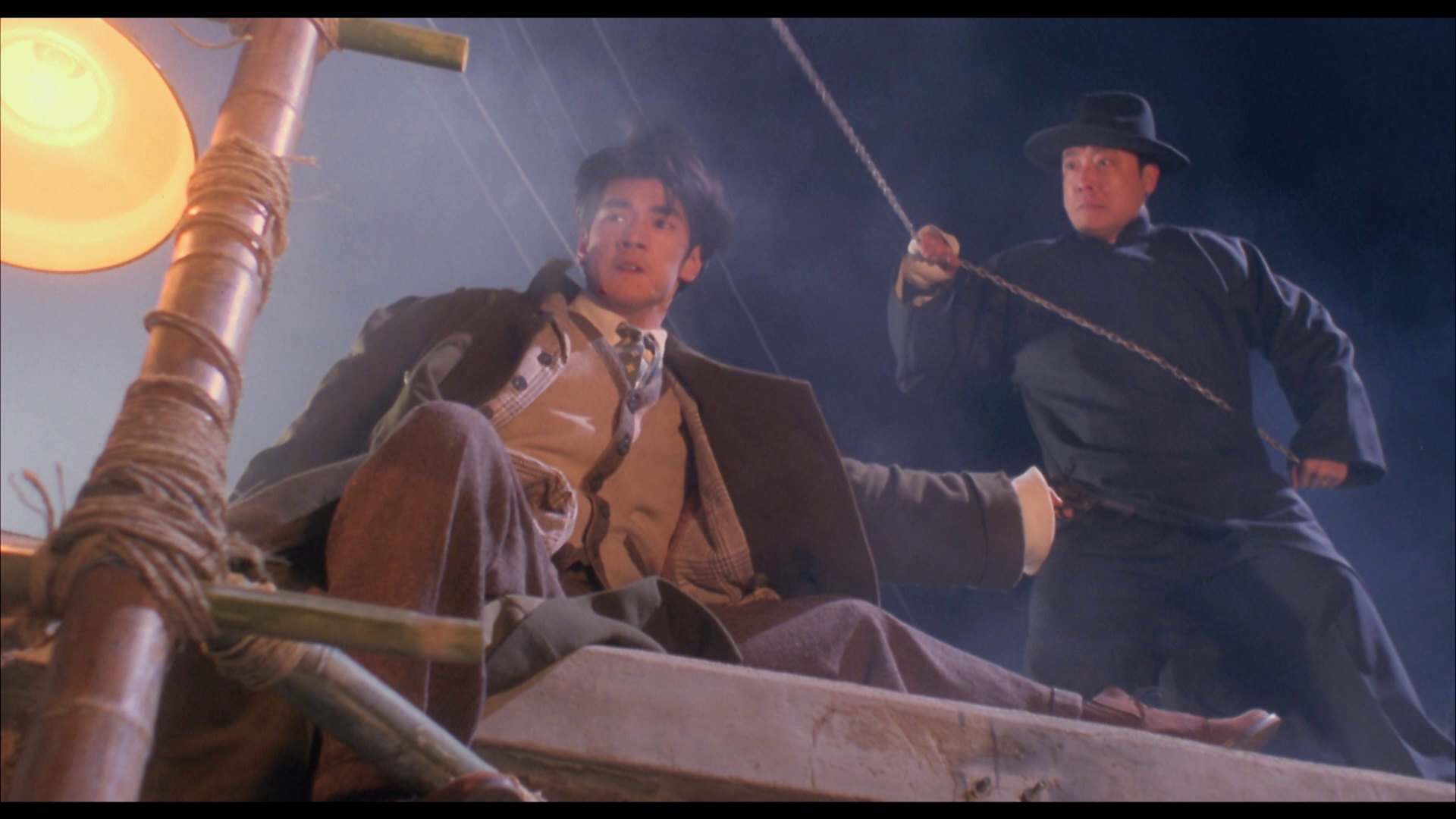 A rather ugly effort from 88 Films this time out begins with notable noise reduction. Hardly any grain remains in the image, diluting any and all fine detail from the frame. The waxy look dominates, and there’s no suggestion of Hero ever looking akin to actual film stock. And, even without the challenge from film grain, the encode is sloppy, leaving artifacts strewn about and further eroding the source’s definition.

Supposedly from a new scan, if that’s true, then it was produced at sub-HD resolution. Visible aliasing mars distant lines, and even in close, image breakup continues to be an issue.

The only positive thing to say is the decent enough color reproduction (but still bland) and solid contrast. Even without natural fidelity, Hero has depth thanks to the visual range.

English dubbing and original Cantonese mono both come in DTS-HD. Both are awful, although the dub wins in terms of audio quality (speaking nothing of the dub itself). The Cantonese track is difficult to even listen to in places, the score stuck at a murky mid-tone. There’s zero range to speak of. Fights only worsen things. Muddy bass accompanies every strike, more obnoxious than anything, as if mastered with the low-end setting cranked to high.

Subtitles are forced when selecting Cantonese, and even if you’re a capable speaker, that’s not a negative. Muffled lines fall apart, murky at best, and more akin to a dusty record. Many of 88 Films’ vintage Shaw Brothers recently genre Blu-rays sound more modern.

A lavish physical package with booklet and poster compensates for the weak on-disc bonuses that includes a commentary with experts Mike Leeder and Arne Venema, trailers, and alternate shots from the Taiwanese cut.