Boxing out the Underworld

The 1970s saw an influx of wealth in Hong Kong. Industrialization led to dramatic economic growth, and not everyone benefited. The Boxer of Shantung, although set in turn-of-the-century Hong Kong, looks at the rise of a desperate homeless fighter Ma, dreaming about the wealth he sees around him. Unfortunately, that money is corrupt.

Ma (Kuan Tai Chen) becomes the antithesis to gangsters. He allows the poor time to pay their debts, if he asks for them at all. His power grabs come when he pushes inward on rival territory, a violent Robin Hood in a way, although revenge eventually consumes Ma as well.

Boxer of Shantung is capably written to keep a careful pace

It’s a film with a warning to those seeing Hong Kong stretch outward and skyward, then becoming desperate for their own wealth. Ma resists temptation for the first act, refusing a lone dollar from a mobster. He holds tightly to his morals, but soon realizes being in their position is the only means to eliminate their barbaric control. Any legal method would take too long, and Boxer of Shantung never once involves any authority outside of the warring kingpins. People die. It’s routine. Not one cop appears to care.

Shaw Brothers tradition brings countless battles to the screen, the choreography stellar and Tai Chen an athletically lean and imposing martial arts figure; he’s a memorable protagonist, plus a capable performer. For the finale, Boxer of Shantung locks Tai Chen in a tea room against some fifty opponents, leaking ludicrous amounts of blood from an ax penetrating his midsection. What follows is genuinely thrilling. Tai Chen violently, brutally assaults his foes in a display worthy of Hong Kong kung-fu epics. What was an earnest, dramatic tale turns into raw spectacle.

Not that each fight prior was a failure, just more personal. Tai Chen brawls smaller groups, wrestling control more out of fear than any uneven numbers. Rivals relent as to not feel Tai Chen’s fists. As he gains increasing influence, his targets grow even more dangerous. Boxer of Shantung is capably written to keep a careful pace, not giving the hero overbearing power, rather a growing confidence and certainty he can help the poor in his community. He loses that ideal later. At least, he never mentions the impoverished again. His focus turns to personal rivals, a selfishness born from greed that too often stains good intentions – a well formed allegory. 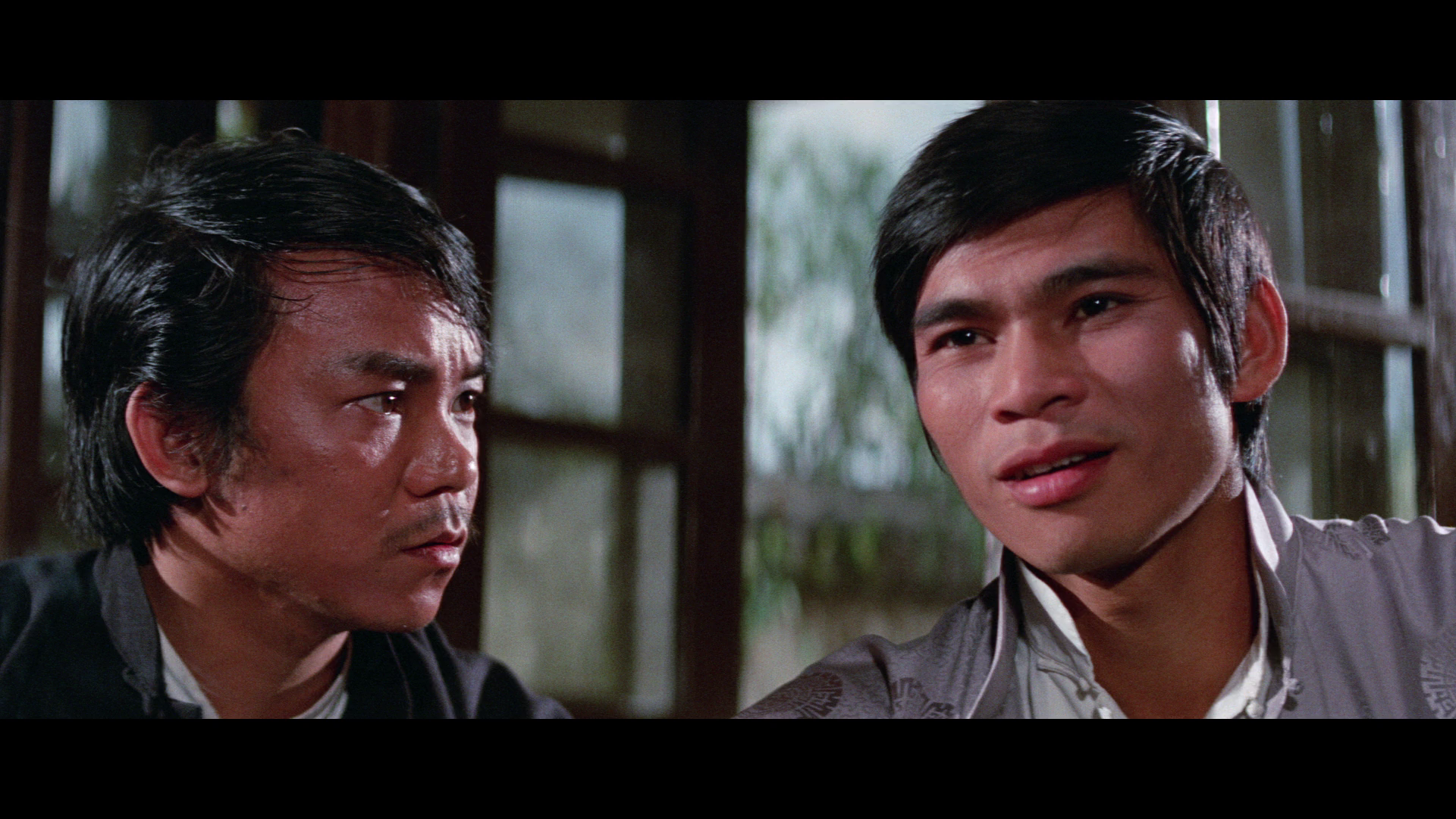 Marvelous imagery runs for the entire film, scanned at ridiculously high resolution, and to untrained eyes, sharp enough to pass as 4K. The amount of texture flourishing as a result belies Boxer from Shantung’s age. This looks new, and with hardly any print damage to speak of, this could pass as recent based on visuals alone.

Fine grain is preserved and easily resolved. The slightest misgivings among smoke/haze aside (and it’s truly minor), the compression is wholly transparent to the source. Texture pours from each frame, the close-ups offering more facial definition than previously possible. Turn-of-the-century Hong Kong studio sets show enormous fidelity, wood and brick equally visible down to their tiniest design elements.

Splendid color adds life to the primaries. Each hue shows bold, bright saturation. Overly red blood, a hallmark of Shaw Brothers genre flicks, looks almost neon in intensity. That’s not a complaint. Warmed flesh tones appear attractive and pure. This is all helped by superb contrast, keeping things bright against deep black levels. The latter does crush in spots, if held in check to the darkest parts of the screen.

Mandarin and the English dub employ DTS-HD for their mono sound space. There’s definite age to both tracks, the Mandarin more natural of course. A scratchiness persists in the dialog, although this causes no notable detriment. For a 1972 import, it’s better than expected.

Same goes for the score, wobbling a touch at peak treble. However, from the jazzy opening number through to the finish, it’s a crisp enough track to maintain the thin dynamics.

A trio of interviews open this disc, including John Woo (who was assistant director on Boxer from Shantung), and stars Chen Kuan-tai and David Chiang. Kuan-ti returns with Ku Feng for another conversation, filmed in 2007. Alternate credits come before the finale, which includes a trailer and image gallery.

The Boxer from Shantung

The Boxer of Shantung explores Hong Kong’s gangster underworld through kung-fu and finds a unique moralist take on both genres.