To revisit The Matrix is to revisit Precambrian internet tech. Dial up and CRT monitors, pay phones lining sidewalks and cell phones that look like bricks. Despite this though, The Matrix doesn’t date itself. The Matrix serves a Gen X fantasy, where the humdrum beginnings of online connectivity led to ponderous, screen-staring corporate office gigs. Individuality faded. To consider such an escape – even one where sci-fi suggests a false existence – was a sensation.

It’s wild and philosophically speculative. A plainly named cubicle slave Thomas Anderson (Keanu Reeves) leads a band of rebels through actual reality, some 200 years in the future after machines overtook us all. This isn’t Terminator. More post-Terminator where the machines undoubtedly won, and the fragile fragments of resistance await a savior.

Mr. Anderson turns into a Christ figure, a singular, all-powerful, all-knowing rebel against a vicious, well-dressed authority. The Bible, retconned, with a hearty dose of exposition to explain it all. At times, it’s genuine. “The spoon isn’t real,” says a small child, convincing Anderson – or Neo in this future – of the world’s open possibilities. That’s clever. The rest is Reeves asking “What’s that?” repetitively, souring the intellectualism of the script. It’s unavoidable, lest a large market audience find themselves dumbfounded.

Even without seeing The Matrix, the nigh maddening influence on pop culture and action cinema still festers in studio cinema

To be clear, Matrix churns through the staples of Eastern martial arts film, just one that’s wildly subversive considering the surroundings. It’s a kung-fu movie, choreographed by an iconic Chinese martial arts legend, Woo-Ping Yuen. Such genre cinema often begs for a sense of triumph, strength, and resilience. Matrix uses the template, if without the sense of eventual triumph; that’s why sequels exist. Bullets zip by too. Matrix is an American production in that sense, battering security guards and cops with lead in an unforgettable hallway shoot-out. The fantasy is at times sick with spilled blood, but also adversarial genius when in the view of hardened ’90s counter-culture.

Even without seeing The Matrix, the nigh maddening influence on pop culture and action cinema still festers in studio cinema. Forgetting The Matrix is impossible. Other try-hards that followed, like Aeon Flux, tried to capture a plane of visual oddity without success. No one matched the dingy Frankenstein’s lab look, drowning characters in twisted steel and illogical piping. Somewhere, a screen or two rains nascent green code, still forming the world outside.

Of course, there’s a plethora of slow motion, the rare film that delights in showing impact. Punches, kicks, bullets; each explodes their target in a peculiar, sometimes uncomfortable way. The surrealism attained here is a special concoction of beefy budgeted studio cinema and the eclectic mind of two relative newcomers. It’s a special bit of sci-fi, action, martial arts filmmaking, enduring and forever influential. 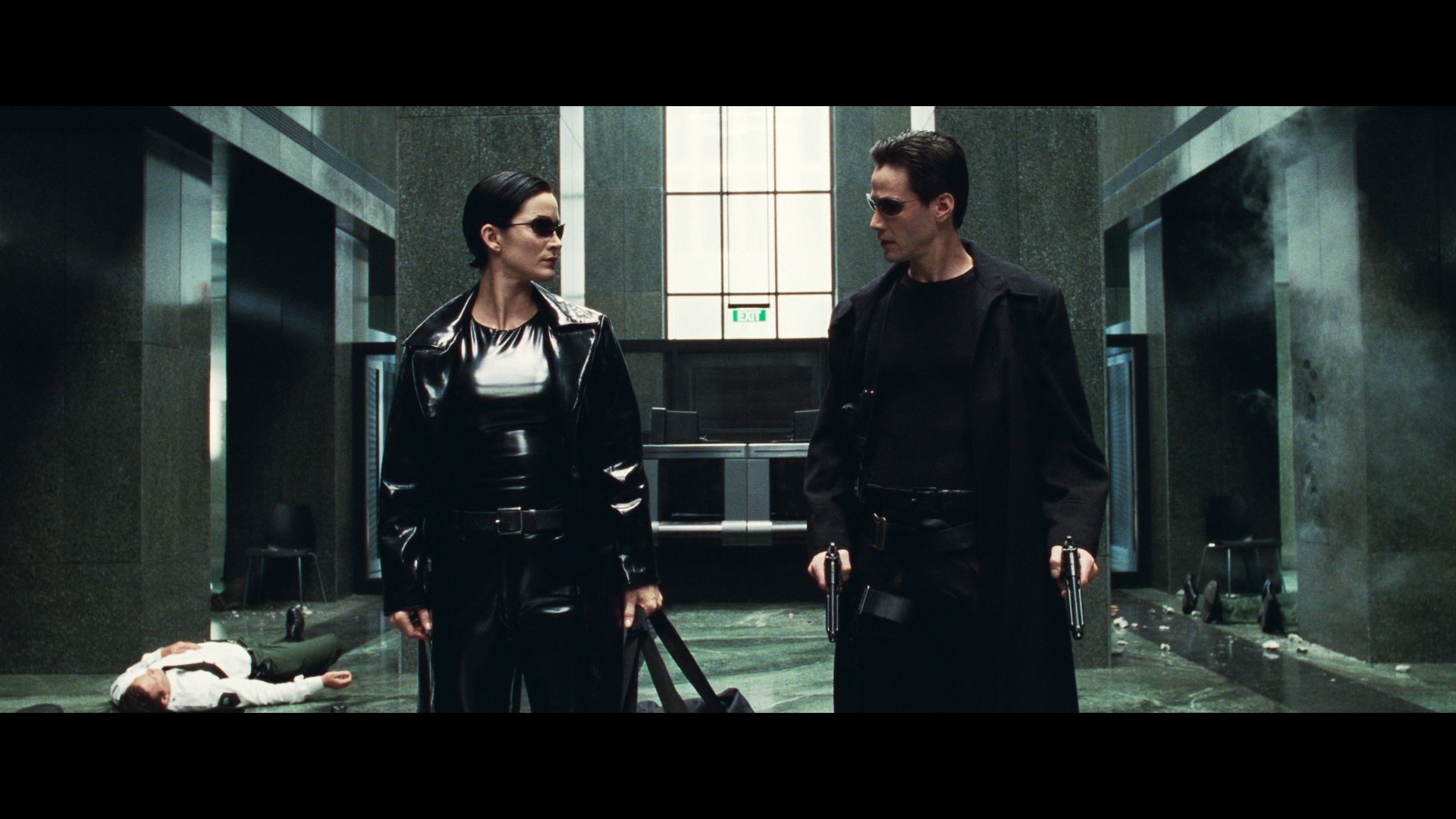 From a 4K master, Warner issues Matrix on UHD alone, without the two sequels. In terms of sharpness, Matrix looks outstanding, some source softness aside. Fine detail is resplendent and clear, resolving facial texture as well as environments. Even CG elements hold their own, surprising considering the age.

Three key colors dominate this film. Each is used to denote a specific place. Humdrum blues deliver our reality, bright greens real reality, and additional yellow when the two merge. Wide color offers new depth to this grading, deepening hues and giving them zest. It’s not obnoxious, but carefully implemented with purpose. Flesh tones follow, at times a ghastly peach as if colored by Crayola or one of Ted Turner’s early colorization projects. Other times, dimness sets in, creating pale atmosphere and robbing characters of life. That’s also appropriate.

Where the disc finds itself in trouble is noise. Chroma noise, specifically. The bright greens invite buzzing and light discoloration, sapping some of the finest possible detail. There’s marginal loss, but the distraction is a greater issue. Matrix has a slightly messy look from the loosely resolved grain structure, although the print suffers no scratches, dirt, or scrapes after 20 years.

Dolby Vision adds heft to black levels. Inherent to the source is heavy crush, especially in the first act. A pass of HDR won’t fix that. Like the chroma noise, that’s still a menial flub. There’s great dimension on this disc, splashed with extreme highlights (sometimes overheated) and deep, rich shadows. Certainly, this defeats the Blu-ray edition definitively.

Note the disc defaults to Dolby Digital 5.1. Don’t do that. Take the second to switch over to the Atmos track to get a vibrant, booming audio presentation. Another one of those all-timers like Saving Private Ryan that’s impressed since Laserdisc, Matrix contains wild and exaggerated sound design. The way gunshots crush the LFE and scatter wide debris fields fits into the fantasy. It’s beefy and a showcase for sure, capitalizing on each bit of offense whether that’s a gun or a fist. They hit with force either way.

Extensive surround use puts characters in danger as Sentinels drop down. You can hear the lasers spitting and steel splitting around the cast. For high-grade sci-fi, this Atmos mix offers convincing style and accuracy. As rain falls on Reeves’ apartment, that might require a pause to ensure it’s not a storm outside your home. That’s easily a top rain effect.

For action though, nothing is missed and there’s arguably too much, but that’s no complaint. Making Matrix feel ever bolder is the correct way to go.

Everything carries over from the previous Blu-ray release without new additions. That’s okay. The wild trio of commentaries offer enough on their own. The critics track is a must-listen as the Wachowski’s gathered three critics who didn’t like the movie to offer their thoughts. It’s still unique. A philosophers take is great too, another bit of outside-the-box thinking. Finally, the Carrie-Ann Moss and crew pop in to tell their stories.

Over on a separate bonus disc, the two hour documentary The Matrix Revisited follows the production in totality. Despite some age in delivery, this is a definitive look at the production. Scene breakdowns and an HBO making-of come next while a few pop-up features come included without the annoying pop-up method itself. Just enjoy the footage. A couple of bonuses regarding the music take this disc to the end.

Twenty years past the theatrical release, the influence and style of The Matrix is still felt in sci-fi solidifying its standing.

The 15 unaltered images below represent the Blu-ray. For an additional 40 Matrix screenshots, early access to all screens (plus the 12,000+ already in our library), exclusive 4K UHD reviews, and more, support us on Patreon.

The following six screen shots serve as samples for our Patreon-exclusive set of 55 full 4K screen shots grabbed directly from the UHD: