John Cusack and Emile Hirsch team up for Pursuit, an unforgettably bad and broken crime thriller. High on inane action, the misfire is low on everything else worth mentioning. Director Brian Skiba covers up a paper-thin screenplay with ham-fisted violence and a cast that doesn’t really fit together. Nothing goes right for the bloody actioner.

Pursuit commits the cardinal sin of schlocky, direct-to-video filmmaking by letting audiences know within minutes it’s a nigh unwatchable mess. Many viewers likely won’t make it past the opening act. In service to the wider movie-going community, your humble reviewer sat through all 97 mind-numbing minutes. Cusack’s talents are largely wasted as a stereotypical crime boss and Hirsch is clearly winging it in a befuddling performance as a ruthless anti-hero on the run.

Pursuit is a jumble of cheap action sequences and ridiculous plotting

The convoluted plot orbits around John Calloway (Emilie Hirsch), a notorious hacker whose wife and possibly child have been kidnapped by a drug cartel. In John Wick style, Calloway goes on a cheap-looking b-movie rampage. NYC detective Mike Breslin (Jake Manley) stops him but Calloway escapes custody when transferred down to Arkansas, the home base of his estranged father’s criminal operation.

The hackneyed action tropes fly fast and furious as Breslin partners up in Arkansas with a straight-shooting female officer (Elizabeth Ludlow) looking to find Calloway. Facing corruption at every turn as they draw closer together, the high-octane action nearly reaches parody levels.

An incomprehensible movie like Pursuit exists because the DTV market is constantly demanding star-driven content and Nick Cage can only star in so movies at once. Hirsch isn’t a stranger to the genre, having starred last year in the stronger procedural Midnight in the Switchgrass. Even if Pursuit had a decent screenplay with sharper characters, he’s terribly cast as a super-hacker action hero.

Cusack does what he can as a terribly generic crime boss but it’s not enough. It’s not the veteran actor’s fault Pursuit is a jumble of cheap action sequences and ridiculous plotting. I imagine we’ll see more of Cusack in these DTV thrillers as his days leading big-budget studio films are over. 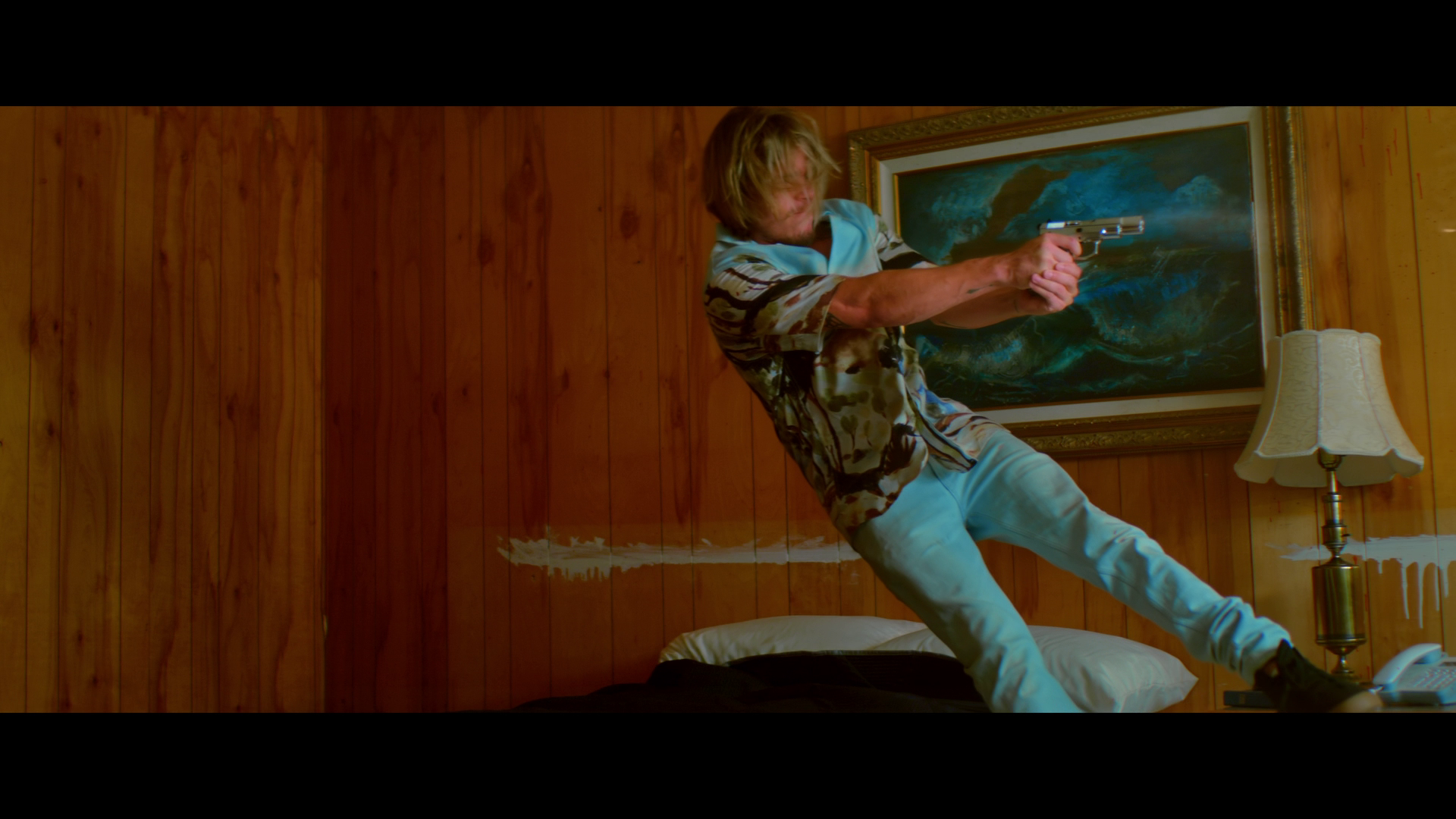 Pursuit bears all the hallmarks of most newer Red productions on the indie scene – pristine, razor-sharp and bright filmmaking made quickly and cheaply. The contrast and black levels are solid contributors to the mostly appealing video.

The 2.40:1 presentation offers clean cinematography, even if Lionsgate’s modest AVC encode introduces moderate banding into the 1080p video. Definition and clarity are excellent, hampered only slightly by interior shooting.

5.1 DTS-HD MA provides an actively discrete soundtrack filled with explosions, gunfire, and messy action. Dialogue is nicely rendered in clean, intelligible quality. Bigger stunts like shoot-outs and fireballs are surprisingly immersive for a low-budget flick. Nothing too surprising in the mix, but it adds appropriate atmosphere in measured doses.

A glossy, embossed slipcover may be the single highlight of the Pursuit experience. Lionsgate includes an HDX digital copy, redeemable on VUDU.

Behind the Scenes of Pursuit (08:13 in HD) – Producer Andrew Stevens and director Brian Skiba discuss their apparent enthusiasm for this mindless DTV film in this competent featurette. Skiba was chosen for his fluency in directing action scenes.