Barbarians at the Gate

The Yang family defend their country; it’s their purpose. Banners in their home signal to be a patriot above all. A loss to invading barbarian horde, after spending their entire lives being told their fate is victory, proves crushing.

Of the surviving brothers, one loses his mental faculties, the other joins monks. Both endure trauma, but in their own way. For Shaw Brothers, Eight Diagram Pole Fighter is yet another martial arts revenge story, the studio’s norm during their golden era. Yet it’s fitted to a loosely historical and nationalist tale, that celebrates patriotism much as it warns of the effects.

Always eclectic in their training sequences, this Shaw entry uses wooden wolves to teach fighters bo staff techniques. That’s clever – these monks defend against a pack mentality, while bonding their own the same as the wolves do. Wu-lang (Chia-Hui Liu) enters the temple hot-headed – literally in this case – and alone. Over time, while losing none of his focus on enacting vengeance, he comes to understand the different skills, creating a satisfying arc that isn’t dull between the elaborate fight choreography.

Eight Diagram Pole Fighter leaves room for the genre to grow too, letting co-star Kara Wai search for her brothers in a gender reversal. While the script then flips that around, the finale allows for equality, brother and sister side-by-side in a wild, outnumbered duel that’s sensational to watch. Eight Diagram Pole Fighter checks the Shaw Brothers boxes in totality, with a period costume setting, story beats, ludicrous martial arts displays, and remarkable athleticism, this in addition to the smooth flowing character drama.

There’s no shame in bettering the culture’s heroes as Eight Diagram Pole Fighter drifts toward total fantasy. Simple strikes send six men flying through the air on impact, and others find their teeth ripped out, still embedded in bamboo staffs. Truthful this is not, yet it’s proudly of Hong Kong origin, celebrating those who settled the land centuries before while instilling values into another generation. Surface level popular media aside, there’s a genuine, meaningful arc in this saga. Plus, it’s built on a well rehearsed, comfortable style that creatively evolved in each subsequent genre movie. 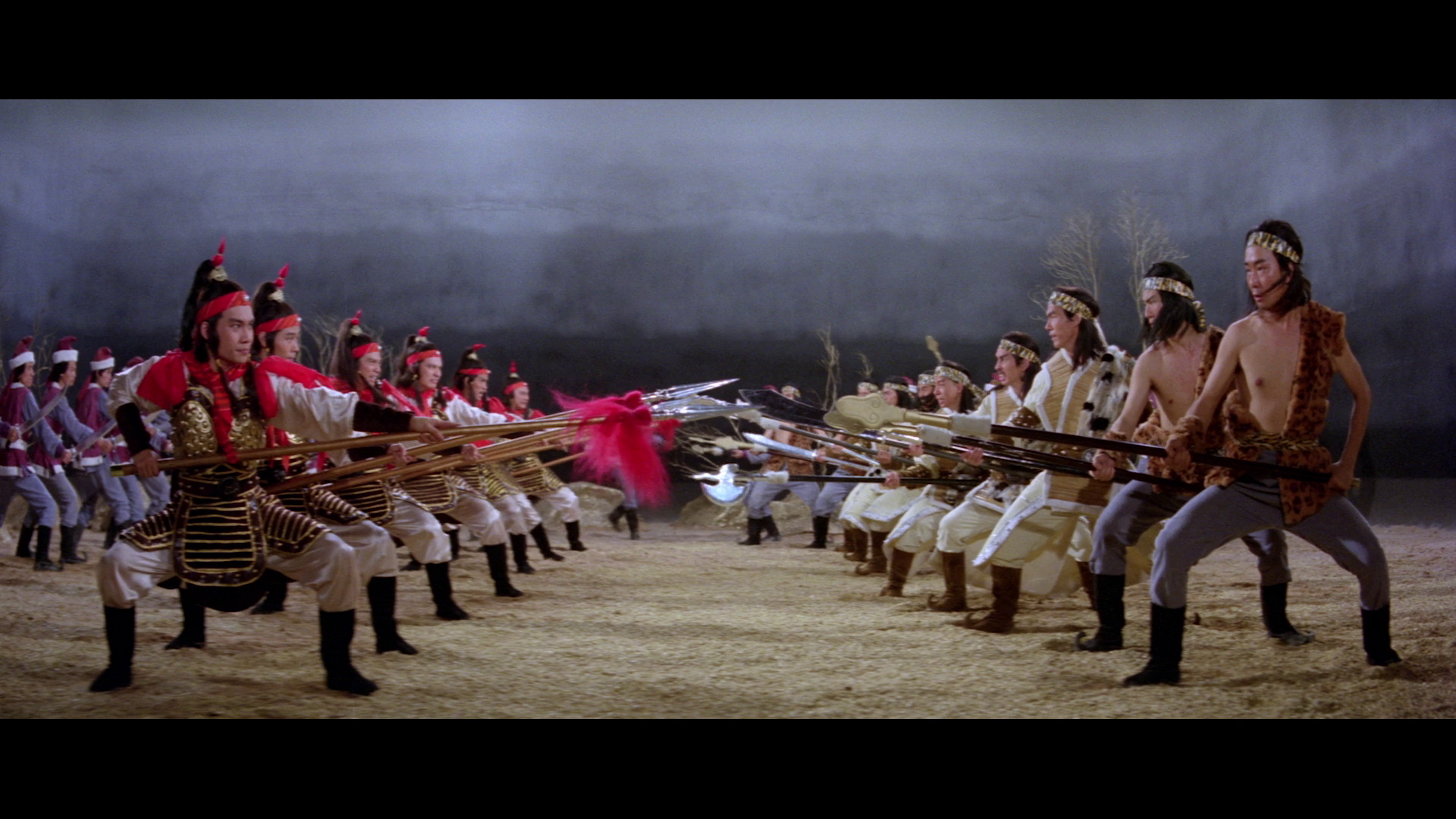 This is in addition to stellar black levels. Every shadow hits the deepest black. Contrast gorgeously balances out, turning Eight Diagram Pole Fighter into a near-3D presentation. Dimensionality comes in abundance.

With only a thin grain to handle, the compression holds up, maintaining the film-like qualities, even during heavier instances as the grain spikes. Resolution holds the imagery back, struggling to resolve wide/medium shots, unable handle the finest details within. Any loss is limited, and there’s texture aplenty elsewhere. Close-ups bring facial definition and sweat droplets without issue.

Cantonese, Mandarin, and an English dub all come in DTS-HD mono. Unlike the video, the audio track’s worn out, with hissing dialog. Nearly every line is delivered with static.

While the dull score (which oddly uses a Japanese Akira Ifukube track from Frankenstein Conquers the World) doesn’t feature any range to speak of, the music at least retains some integrity and clarity. Within the action, it’s balanced well too.

Johnathan Clements is your host for a commentary, and it’s Tony Rayns delivering a visual essay. Interviews come in a trio, including Gordon Liu, Lily Li, and Yeung Ching-ching. A Fu Sheng tribute, sourced from a German dubbed copy, played before Eight Diagram Pole Fighter during its initial release, and is included. Alternate opening credits, images, and trailers round this one up.

Revenge and patriotism blend to give The Eight Diagram Pole Fighter the needed fuel for its outstanding fight scenes.