For Megan Fox Fans Only

Bruce Willis has been churning out a slate of mostly mindless, direct-to-video films the past few years with questionable results. The producer behind many of those films, Randall Emmett, makes his directorial debut with Midnight In The Switchgrass. Despite his leading credit, Bruce Willis plays a small role alongside real stars Megan Fox and Emile Hirsch. The barely functional movie isn’t a complete disaster but nothing is particularly compelling.

A crime thriller loosely based on a real story, the most interesting thing anyone should remember about Midnight In The Switchgrass is that Megan Fox met Machine Gun Kelly (who has a small role himself) while shooting the forgettable procedural. The two have been inseparable ever since in a very public relationship and both have more or less disavowed Midnight In The Switchgrass. Machine Gun Kelly recently referred to the movie as “trash” on Twitter and Megan Fox skipped the L.A. premiere. You would think the Hollywood It couple might have warmer feelings towards a movie that brought them together. This is no Chinatown but the pedestrian serial killer mystery isn’t that terrible.

FBI agents Karl Helter (Bruce Willis) and his partner Rebecca Lombardi (Megan Fox) are working a sex-trafficking ring in Florida when they come across the case of a brutal serial killer. Scores of missing women are turning up dead near truck stops and the local police have quietly given up. The string of unsolved murders haunt Florida state officer Byron Crawford (Emile Hirsch). Realizing they are after the same killer, the FBI agents team up with Byron in the chilling hunt to capture the twisted killer.

The budget is supposedly ten million dollars, little of which appears on screen in any meaningful form. Supposedly set in the Panhandle of Florida, most of the film was actually shot in Puerto Rico. The money must have gone into salaries for Willis and Fox because the production looks and sounds unpolished outside of its stars. Bruce Willis was once one of Hollywood’s greatest actors, a leading man who drove audiences to the box office. His talents are largely wasted playing a father figure and mentor to Fox’s junior FBI partner.

The main plot primarily revolves around Megan Fox’s tough-minded and daring FBI agent, a woman willing to play bait for dangerous predators in undercover stings. If this movie does find a following, it will be her fans and her fans alone that like it. The premise isn’t exactly fresh but the procedural delivers enough thrills and taut suspense if you enjoy seeing Megan Fox on screen. Nothing else is especially striking beyond Hirsch’s respectable performance. 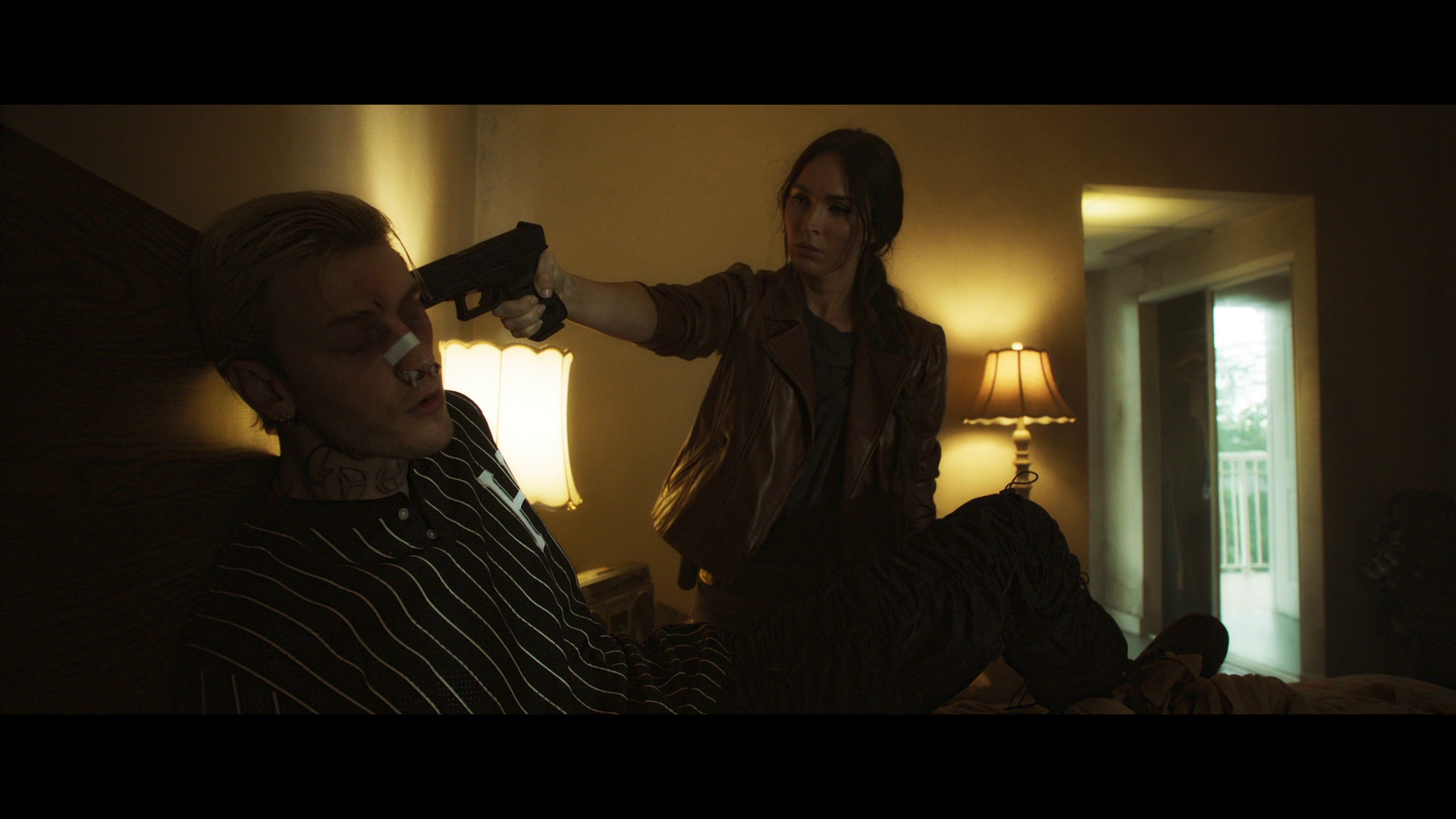 The main feature runs 98 minutes on a BD-25, encoded in Lionsgate’s usual AVC. They’ve been using the same encoding practices for several years and their compression results leave something to be desired when stacked against the latest and greatest encodes from other labels. Some banding is noticeable. The digitally-captured 2.39:1 movie has a sharp, glossy sheen with erratic cinematography.

Midnight In The Switchgrass was mostly filmed in Puerto Rico and the results reflect a cheap, indie vibe despite the excellent definition and clean clarity. It’s bright, sterile video made quickly during the pandemic, though the 1080P resolution certainly highlights pleasing detail. The contrast could have been tightened up with more care, some scenes verge on getting blown-out.

The 5.1 DTS-HD MA soundtrack has big dynamics and features an eclectic array of songs. The discrete mix isn’t particularly aggressive in the rear channels but fills up with atmospheric touches. Dialogue is nicely centered and intelligible. No one will confuse the surround mix as anything but a perfunctory offering which proves serviceable for the indie crime thriller.

Optional English SDH and Spanish subtitles play in a white font, often outside the 2.39:1 video presentation.

A slipcover is available for Midnight In The Switchgrass. Lionsgate includes a digital copy which redeems in HDX quality on VUDU. Interestingly enough, digital streaming services carry the movie in UHD quality.

Midnight In The Switchgrass Trailer (02:49 in HD)

Director’s Audio Commentary – Producer and director Randall Emmett is no stranger to Bruce Willis projects, having produced by his own count nearly 16 films for the once A-list star. This is a commentary only a producer could love. It’s a self-serving chat by Emmett, who gushes over every actor in the film. The biggest takeaway is that the pandemic greatly affected production, halting all shooting for several months.

Midnight in the Switchgrass

Another direct-to-video thriller with Bruce Willis that is only worth seeing for star Megan Fox.