Although locked to the Disney formula (including a parent’s death in record time), Encanto’s uniqueness lies in how little story it needs to tell. There isn’t a grandiose villain to fight or rival for protagonist Mirabel to overcome. Instead, it’s a family-based coming-of-age drama, with shrewdly considered racial tensions.

With the studio currently a basis for primetime political pandering, Disney begins Encanto with an immigration tragedy carried through generations, solidifying the perspective before settling in a gorgeously, fetching Colombia. Soon, politics matter not – Encanto settles into a fairy tale of generational magic that leaves the magic-less Mirabel an outcast.

Without an antagonist, Encanto feels freer to explore emotions and ideas naturally

It’s a creative approach to writing something this familiar. Typically, it’s the artistic child of a blue collar worker refusing to follow their parents path. Here, it’s based in tradition, Mirabel (Stephanie Beatriz) feeling distanced from her grandmother, even rejected, when she fails to display any magical skills. There’s worry over not being special, Mirabel unable to see NOT having mystical powers is just as notable, that her vivid personality brings joy to others. Mirabel has visions that reveal literal cracks in the extended family’s home, furthering her fear.

Encanto charms through color and some of the studio’s best musical output since Frozen. Playful animation embraces jaunty playfulness and inherent unspoken issues together. In her first song, Mirabel celebrates her siblings and extended family’s other worldly skills, dodging her own inability to summon flowers or exercise super strength. Even through Mirabel’s frustrations and worries she’s causing problems, Encanto never falls to total darkness. Without an antagonist, Encanto feels freer to explore emotions and ideas naturally; it’s not bound to marketing’s need to sell toys.

There’s much said about being lost amid successful people, and feeling forgotten as others receive more attention. In this circumstance, Mirabel is a perfect centerpiece, delightfully cheery in personality, yet complex enough to carry Encanto’s necessary conflicts. Even with technological advancements, there’s a grounded animation style to Mirabel (and the others) that feels wholly Disney, from the fluidity to the specific gestures. Mirabel becomes an instant princess without having to do anything other than be herself. That’s her specialty, and enough for her to be part of this gargantuan household. 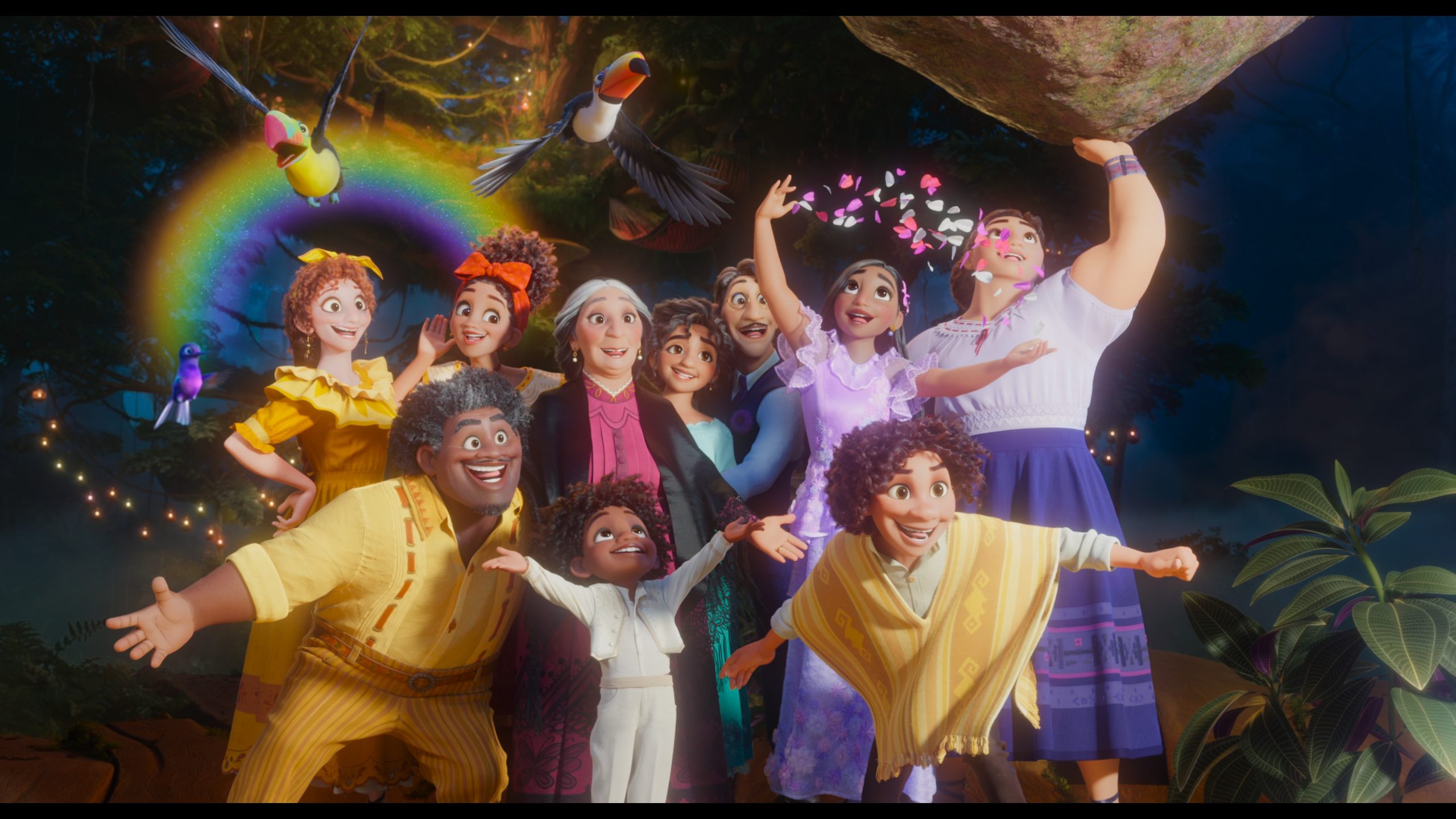 Well this is colorful. As in, a lot colorful. Flowers, dress, houses, animals – Encanto doesn’t stop showing off incredible saturation. It’s not unusual for Disney animation, but Encanto is special even by those standards. It’s an unstoppable deep color showcase that’s among the best on the format to display sheer variety.

It’s equally fierce through the HDR, glowing and shimmering as magical powers brighten the screen. Stunningly intense doorway lights match firework displays, fitted to an overall vivid contrast that rarely has an off moment, even during the darker, dramatic scenes. Of course the rich black levels help in that regard. Every shadow is flawless.

Add to this pinpoint sharpness that draws out every ounce of texture layered onto the animation and Encanto looks like pure magic in 4K. Almost certainly, this was rendered at full 4K given the fidelity, especially when it comes to wide shots that include forests, tile roofs, and various decorations. It’s a lot to process, and the disc doesn’t show a single sign of struggle. Marvelous.

There’s energy in this Dolby Atmos track, vibrant when processing music via wide range. Vocals comfortably sit amid the instruments as a satisfying beat enters the low-end. Peppier action scenes suffer from Disney’s usual clipping, holding back bass, if to a lesser extent than the studio’s typical norms. A few booms hit pretty hard though (especially when Luisa uses her muscle to stomp stuff), so it’s not a total loss, certainly better than Disney’s batting average on the format.

Hearty directionality tracks animals as they bounce around the soundstage, high-level ambiance, or other activity. Atmos effects show up on occasions, and the music makes use of heights to better fill the room. Mirabel’s visions that see cracking walls track the plaster falling overhead. It’s splendid overall, and a near miss from being perfect.

Everything resides on the Blu-ray, beginning with the paired theatrical short Far from the Tree that’s delightful in the traditionally animated aesthetic. Next is a three-part featurette on the family and creative process, running 24-minutes total. Colombia’s natural beauty is explored over 17-minutes (and later, there’s a brief tour of the country). A bit on the music, Bruno, and the house follow. Outtakes from the recording booth last three-minutes. Four deleted scenes include an introduction from the creative team.

A charming coming-of-age story about standing out in a large family, Encanto fits comfortably into the Disney formula with a distinctive Colombian touch.