Eastern Promises’ characters all come from the same place. They’re Russian immigrants, some second generation, but born of the same Russian values. Eastern Promises then isn’t necessarily about story – a dead teenage Russian, her baby, and the nurse caring for it – rather the reaction to those nationalist (and even gender-based) traits.

This is never a loud movie. Everyone speaks in soft tones, even if there’s a distinctive chill in their voice. Anger and empathy sound the same vocally. It’s terrifying, a sign that criminal behavior isn’t only essential to their being, yet also normalized.

Mob movies are common. Few, if any, deal with the genre so adroitly asEastern Promises

Mob movies are common. Few, if any, deal with the genre so adroitly as Eastern Promises. Uncomfortable and unsettling as this compacted world appears, it’s instantly natural. A kill happens immediately, then the body enters a waterway. The casualness suggests the countless victims beforehand, and certainly a litany still to come. That surrounds Anna (Naomi Watts), an innocent nurse, at a disadvantage. She knows none of what the audience does, or the consequences created by taking a diary from a deceased mother. There’s horror in realizing these two worlds exist simultaneously, and within walking distance from one another.

Pieces of The Godfather saunter into the script, or at least the structure. The divide between the cautious elders and their brash, drunken children is notably similar. Eastern Promises isn’t only about the internal family though. Anna is but one outsider inadvertently trapped by the illegal deals. Her training as a medical caregiver means she cannot look away, only sympathize. The Russian mob learned to bury those feelings – or they think they have.

There’s a typical gruff, masculine quality to the Russian characters. That’s not unusual. Eastern Promises slowly unravels that exterior toughness, breaking the cliché though Kirill (Vincent Cassel) who in reality is a depressed, drunken fool, bound to his father’s will. He’s a disaster, and matriarch Semyon (Armin Mueller-Stahl) hides his own failings, inching closer to losing his place atop the organization.

Likely remembered most for an unforgettable bathhouse scuffle, that scene subsists partly for the unflinching nudity, if also the sloppiness. Entering the steam room, two killers create an imposing silhouette. Like the mob itself, that’s visual, not truth. It’s not that victim Nikolai (Viggo Mortensen) is especially skilled so much as his opponents can’t successfully stab him. The killers’ ego drives them. They’ve murdered in the past, but only those who relented their fate. The fascinating thing about Eastern Promises is how scared everyone lives behind their ill-placed confidence. 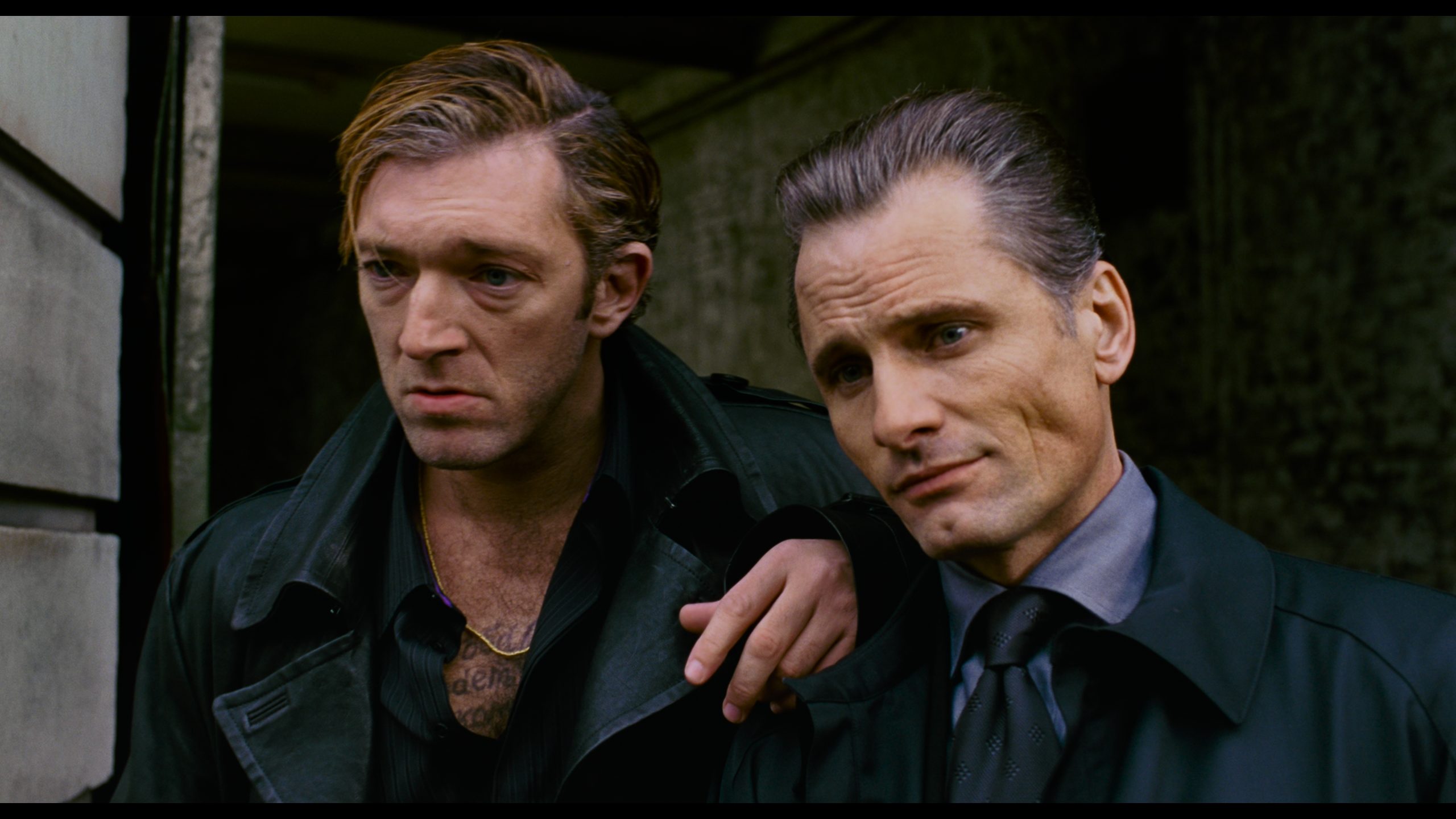 The film stock sports a hefty grain structure, resolved well enough if not perfectly. Whatever the faults, this isn’t enough to dim the stellar resolution that pulls out superlative definition. Eastern Promises looks great in close or at distance. However, some fringing/ringing remains, causing not only the minor halos on high contrast edges (the pharmacist’s coat in an early shot), but also adds a roughened aesthetic to the presentation, diluting the natural filmic appearance.

Occasional dirt/dust sticks around on the print, but barely worth mentioning; it’s otherwise spotless. Generous black levels add tremendous dimensionality to the frame. Black suits and coats worn by numerous characters won’t lose details as the image pushes toward pure, dense shadows. There’s an equally healthy jolt to the contrast, vivid at its peaks, nuanced elsewhere.

For a bit of “inside Hollywood” fun, look at Watts around 42-minutes. The area next to her lips is clearly smoothed over, and the blotches don’t match her skin tone. Other instances of Watts’ digital smoothing (49:49) at least find the proper color.

DTS-HD heightens ambiance on city streets. Far off sirens and traffic fills the surrounds. This is likewise true inside restaurants, whether it’s music or the crowd. Rain fills the rears aggressively as water drips around the characters.

Eastern Promises is an otherwise quiet drama. Expect no low-end support, even during a bathhouse brawl, which keeps the sound natural via fleshy punches. There’s little directionality, even here. The design is purely supportive, not a focus.

Kino adds five featurettes, most of which feature director David Cronenberg, and all remain on the Blu-ray. These detail the production, its origins, and the characters. Most interviews are new, but Kino pulls from the catalog to fill in blanks too. One featurette with Naomi Watts isn’t even a minute long.