Raya and the Last Dragon’s Asian-inspired fable doesn’t stretch itself when hunting for story ideas. It acknowledges as much in the opening dialog – Raya plays up the lone warrior wandering a dystopian desert world. From there, Raya searches for lost dragon crystals, picks up stragglers, and unites a fractured society. Part fairy tale, part videogame.

What Raya does successfully is express itself – openly. There’s such a purity in its animated emotion, Raya herself looks real and alive, even through caricature. Her struggles with trust, even when raised by her father to reach out to her enemies, bring forward an earnest character study, framed in a traditional message about coming together.

Released during a pandemic that saw rising division, Raya fell into lucky timing. Countless big studio animated spectacles push an identical message, yet Raya’s moment makes it especially pertinent, both for being led by Asian aesthetics and empowering kids to be the change they want to see. Raya’s (Kelly Marie Tran) goal isn’t to beat everyone up or defeat a villain. She does fight, but her growth is coming to accept those she feared. In a world driven by border disputes and cultural clashes, that clearly weighs on her. Betrayal follows Raya from her youngest days.

The other familiar devices appear too. Comical side characters come in bunches allowing Raya room to joke around. That’s needed levity in a colorful if dramatic tale. Also, that makes the material inert, an easy criticism common to western-produced animation (and not wrong here either). However, Raya’s routine allows it to penetrate better, staying to form and avoiding stylistic distractions or unusual story beats. Disney being an overpowering consumer brand now, their marketable familiarity is a means to reach wider audiences; that’s crucial for an outing like Raya.

Maybe it’s too soft, ultimately. Awkwafina’s performance as an ancient dragon recalls Eddie Murphy in Mulan, only here, the dragon Sisu carries the soul of humanity. It’s one thing to be playful, another to dismiss outright any tension. That diminishes the thematic weight, putting the pressure entirely on Raya who carries the drama solo. While this creates a firm arc, those around her don’t share the grandiosity, existing purely for casual entertainment. 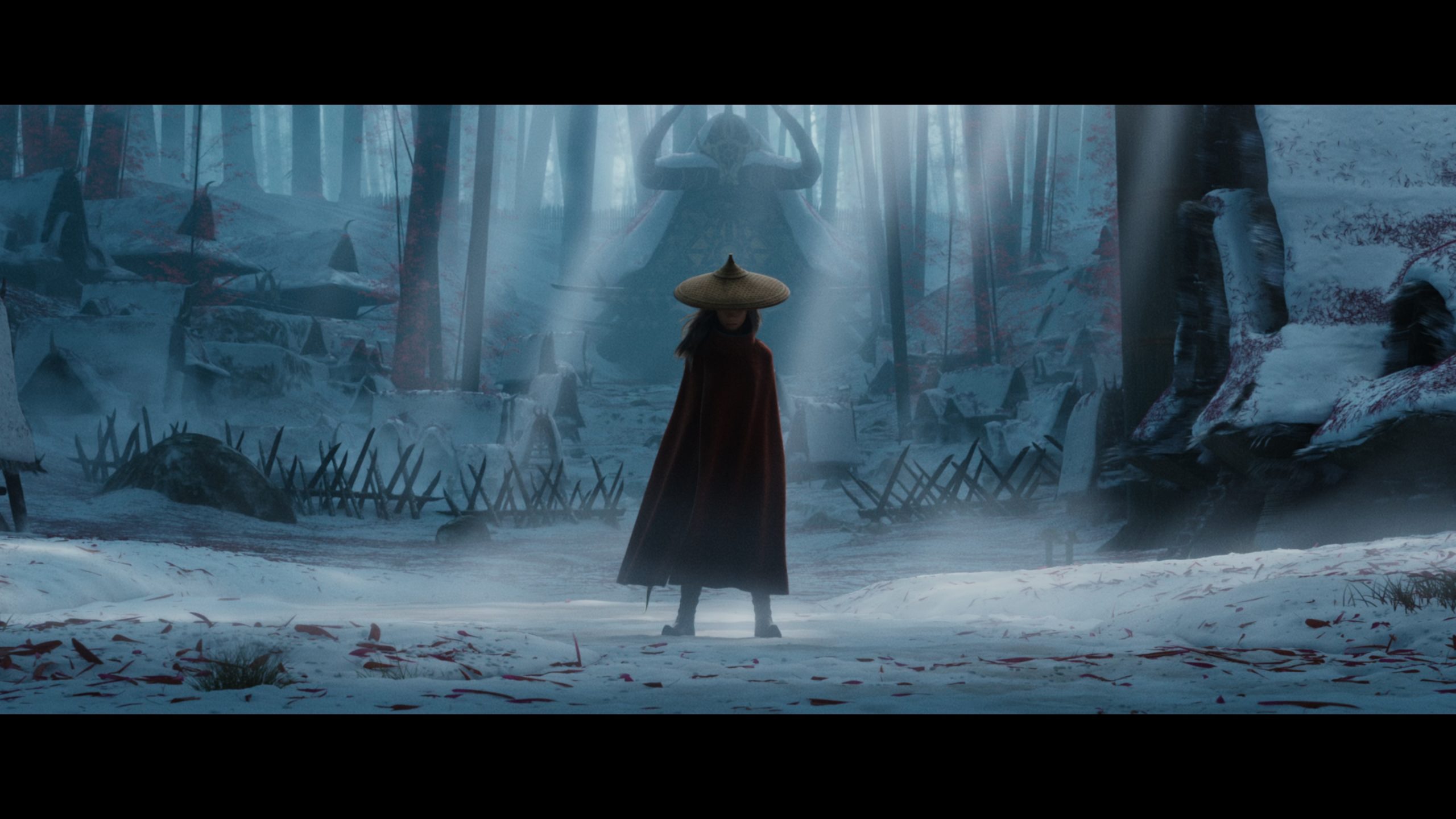 Gorgeous animation stuffs itself with textural details galore. Skin looks just as detailed as the stunning environments. Even clothing sports specific elements that dazzle thanks to the added resolution. Every frame sports pristine sharpness, a minuscule grain filter posing zero issues to the overall imagery.

Drenched in color vibrancy, Raya’s world features endless rainbow-esque beauty. Primaries carry a brilliance even when placed against the rest of Disney’s catalog (or other animation studios). Lushness in the greenery, dazzling power of Druun purple, the amber deserts; none of it fails to astound. This much variety can (and will) spoil other discs.

Generous HDR helps the storytelling, like making the dragon gem shimmer or the Druun shine under their darkened exteriors. Intensity varies to keep scenes specifically vivid or duller, black levels always there to assist. Raya’s density falls into the extreme, and it’s better for it.

Maybe Disney is turning their disc audio around. This is an all-too-rare Atmos track from them using a satisfying, deep low-end to give the action weight. Density generates a thick rumble, solid and pure. Even big drums in the score produce a thickened response. In the last act, earthquakes slam into the lowest Hz, awesome in their power.

Likewise, surround effects engage fully. Heights too, quickly establishing themselves through ambiance. Generous separation splits dialog perfectly. Greater action deals in swords, yelling, and crowds, bouncing between speakers effortlessly. Raya is a near constant performer too given the pacing.

Nothing on the UHD. Pop in the Blu-ray and begin with a short, Us Again, which comes with a director’s intro. A virtual meal with the cast and crew turns into a fun discussion. A look into pandemic movie making lasts 14-minutes. Martial arts earn a five minute featurette. The inspiration for Kumandra delves into the culture of southern Asia over nine minutes. Brief outtakes near two and a half minutes. Some easter eggs, deleted scenes, and storyboard feature mark the finale.

Raya and the Last Dragon

Gorgeous to look at and familiar in form, Raya and the Last Dragon offers an important message at the right time.