Into the ‘80s, Speed turned into the new action cinema template, the name a wink toward dwindling attention spans, the story less about muscular heroes than average working class nobodies. Die Hard started the transition; Speed perfected it.

A blending of disaster movie and invincible rookie cop heroics, Speed works because its premise is perfectly implausible yet continually thrilling. Dennis Hopper, forever one of the screen’s greatest villain players, embodies a crazed bomber, looking for a payout given his awful pension. That’s perfect, breaking free from a decade that saw a wealth shift toward the top, leaving men like Hopper – his hand disfigured on the job – barely able to survive. His anger (but not his scheme) is equally relatable to Keanu Reeves’ empathetic, stone-faced policing.

It’s flawlessly considered. The public bus mixes races and ages, readily drawing these people from separate backgrounds together in mayhem. Reeves and Hopper become a faultless pairing, one the determined youngster, the other disgruntled veteran. The scenario is such that it pits divergent personalities against one another, and it works – even without any growth to Reeves – by leaning into a well plotted “better together” messaging. No more solo theatrics from Stallone or Willis; Speed brought forward “the everybody.” That goes for Sandra Bullock too, driving the bus to the speedometer’s limits without even having a driver’s license.

Wealthy in destruction, masterful in pacing, Speed’s greatest asset is in finding new dangers while stuck on a city bus. The characters are few, yet represent the melting pot ideals as they worry and react. Morbid comedy offers release between sensationally long stretches of chaos: blown tires, gas leaks, traffic jams, failing roads, panicked people. Smart as Hopper’s character is to plan ahead, he can’t anticipate how outlandish this becomes. So compelling is Speed, no absurdity dilutes the entertainment.

Further helped by Mark Mancina’s pulsing score, he took on the following year’s Bad Boys, mimicking his own work because he stumbled on a classic theme via Speed. Like the rest, his music finds the balance between dramatic lows and ridiculous highs. Paired to Reeves’ sure-handed bravery, Speed doesn’t miss. Its effects, its action, its characters… they all work. It’s a tragedy director Jan De Bont’s career evaporated due to an unnecessary sequel. 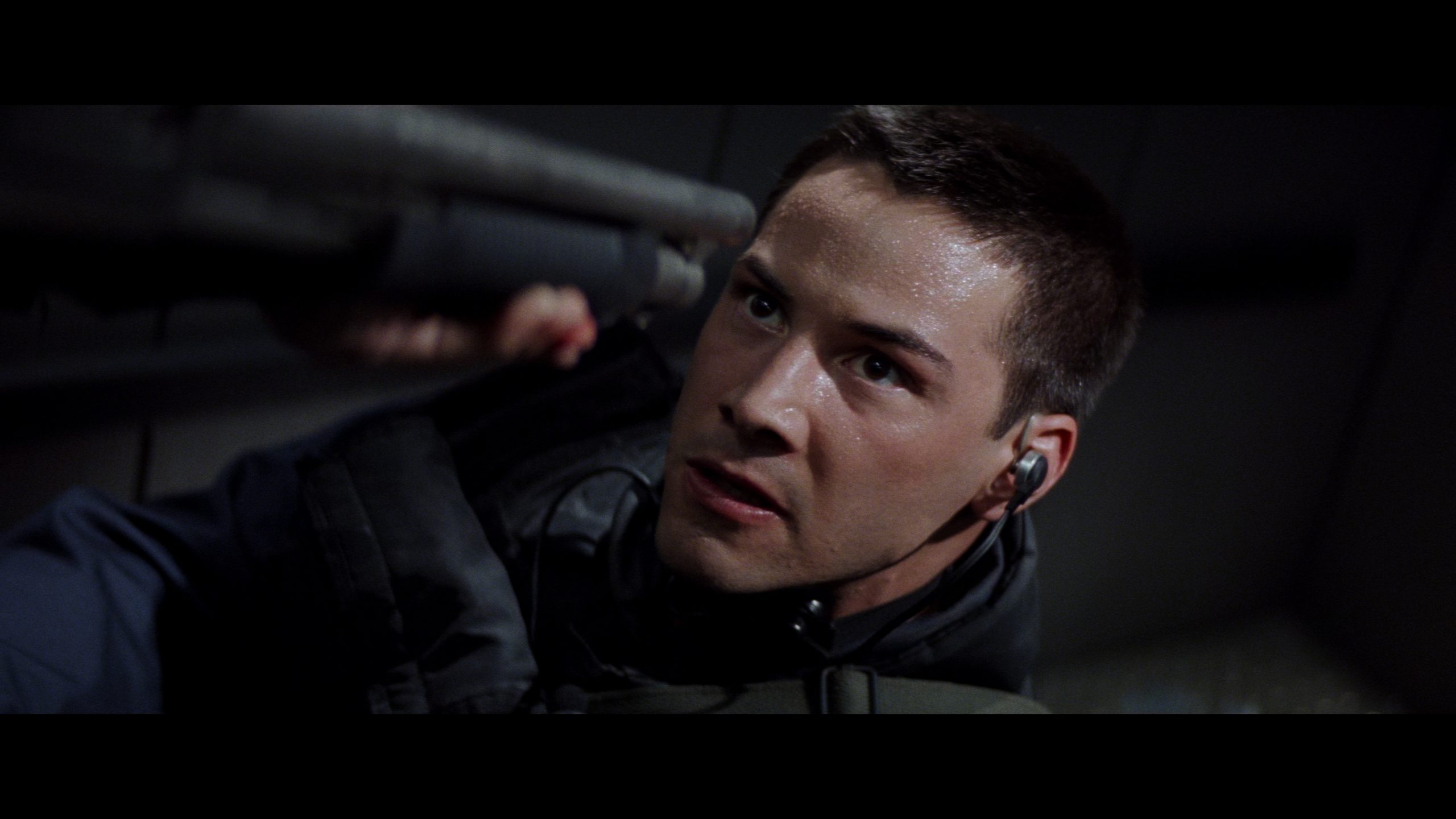 While left alone with a DTS-HD 5.1 mix ported from the Blu-ray, the track still earns a place among the major action flicks from this period. A longstanding home theater demo since Laserdisc, superlative imaging begins at the outset, tracking torn elevator cables as they snap and whip around. Echoes fill potential dead air. Once on the road, cars, horns, and heavy traffic sweep around the soundstage. That becomes a constant, even when inside the bus. Motion earns a reference stamp.

Thick LFE doesn’t always match modern genre flicks, although there’s plentiful punch when needed. Explosions create a jolt and so do collisions. The classic score carries weight too. The best comes right at the end as the subway derails, giving that sequence earthquake-like strength.

Dual commentaries on the UHD itself, one by Jan De Bont, the other joining Graham Yost and Mark Gordon.

Speed perfectly stands for what mega-budget action movies should aim to be, turning into a winking metaphor for the entire genre and dwindling attention spans.