Within the late ‘90s framework, Mulan presses on the inadequacy of social norms. That’s Mulan’s entire purpose, using the perspective of a young woman in an oppressively male-driven society who’s forced into war to save her father. Defying norms means going against all that was taught before, and just as brave when compared to those marching toward battle. Either one can mean death.

In Disney’s way, the fable works, if not particularly adherent to the Chinese lore. Entertaining as he is, Mushu being played by Eddie Murphy seems especially egregious, completely out of place. Mulan’s Chinese history means a wall, sexism, mystical spirits, and ignorant political counsel; that’s it. China is a cover rather than the focus, someplace Disney had yet to stage an animated musical, and a method to insert a feminist fire to their storytelling.

Mulan easily slips into modern times, in any country

One of Mulan’s memorable songs is “Be a Man,” lyrics spouting on about all the things men need to be, or even should be. It’s as demeaning to Mulan as it is the soldiers themselves, still prepping to enter war. Those men come in all different forms, short and fat, tall and muscular, skinny and average. Around them though is a culture who sees them as identical to one another, suppressing individuality. For Mulan, who fits into none of those categories, it’s relentless judgment.

As one of the last in Disney’s traditionally animated line, the technical marks help raise this story from rather plain script writing. More than other offerings during this period, the renaissance formula constantly jabs Mulan at its core. There’s limited bravery in technique or style, invoking CG for critical action scenes, but with care. Otherwise, the fluidity stands out over aesthetics. Set in China, little in the design suggests as much other than temple architecture. Once training or fighting, Mulan fits anywhere.

In a way, that lackluster creative flourish lets Mulan exist as is – the location or backdrop matter not. A woman ascending beyond a path chosen for her, exhibiting strength and smarts her male counterparts can’t, strikes at the potent theme. Mulan easily slips into modern times, in any country. 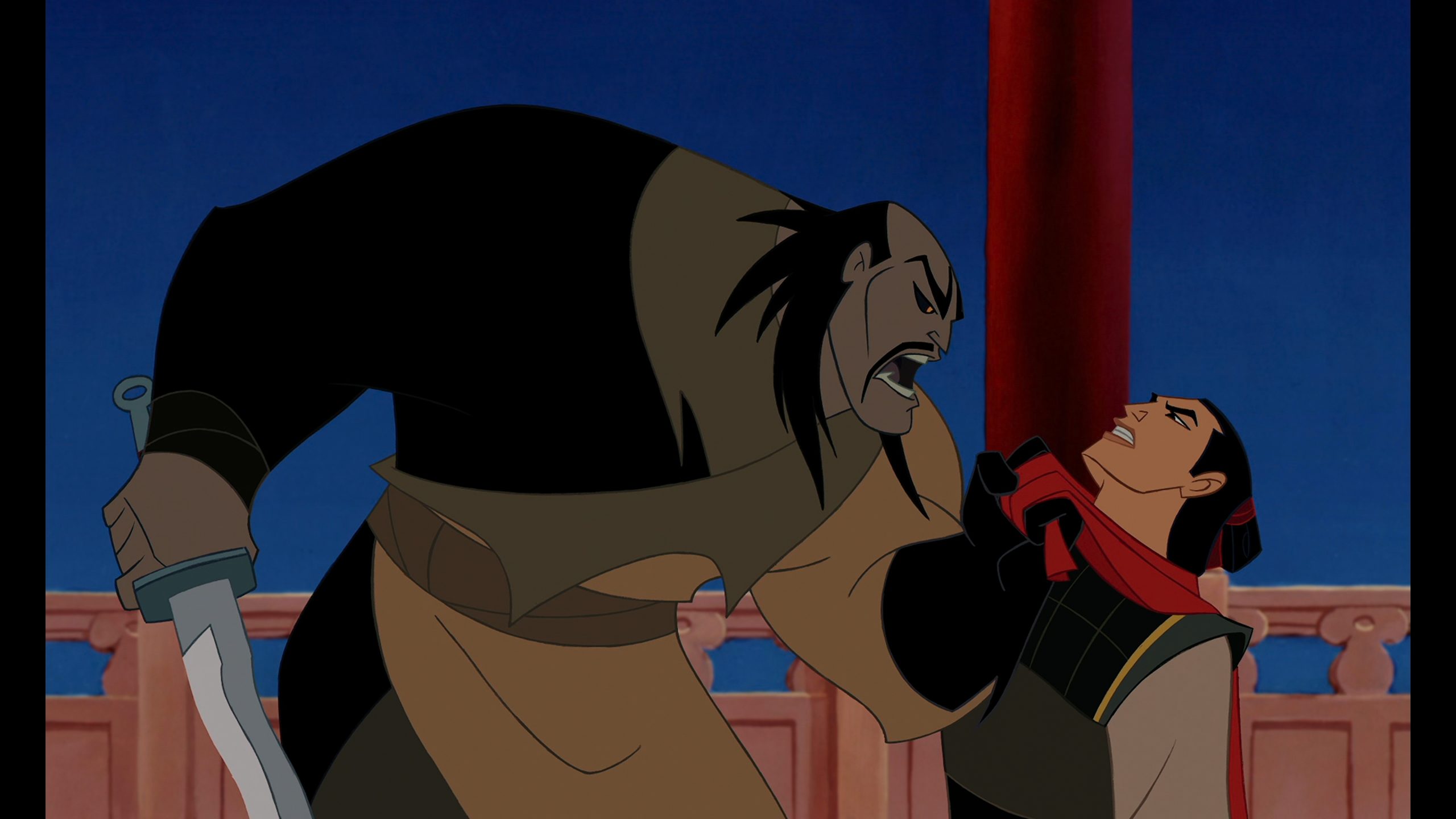 Disney issues Mulan in a decent 4K presentation, similar to others like Aladdin. Expert clarity and resolution gains allow the source animation to thrive. Pencil strokes look splendid and clean, taking advantage of the available definition. Gorgeous backdrops show their painterly quality. Some slight banding/posterization does intrude behind the characters, but softly and being that it’s not the eye’s focus, a non-issue for most.

Unfortunately, persistent ringing is back. One of the few to escape the same fate was Lion King. For whatever reason, the harsh/contrasting edges mar otherwise pristine imagery. More than thin halos, additional faults appear like aliasing. It’s a stupid and unnecessary flaw, as if Disney is overcompensating in an attempt to make the 4K pop more. Instead, it’s rendered messy and impure.

HDR work is nice, but not memorable. Better contrast helps things like flames stand out. When Mushu is brought back, the ghostly glow is spectacular. Brightness is relatively standard for UHD overall, improved in dynamics from Blu-ray. Same with black levels. Deep color is the bigger factor, giving primaries bite and saturation gains. Mulan’s soft palettes sport better density now, a true enhancement benefit to the upgrade.

The 5.1 efforts prior played in the available spaces. Voices stretch out from the center. Effects like smoke/dust spread wide. Mongol horses rush side to side and front to back; where possible, they reach the heights too, camera dependent. Arrow volleys travel well, accurately positioned as they drop on troops.

All on the Blu-ray, which is the same disc as before. Commentary comes from co-directors Tony Bancroft and Barry Cook, seated alongside producer Pam Coats. Deleted scenes reach 22-minutes, with explanations for each cut in-between. Five making-of segments include original story pitches, design featurettes, and other materials worth sorting through if you haven’t before. Music videos and a featurette on the songs close things out.

Mulan doesn’t need the historical setting to work and the animation itself realizes as much, but it’s a capable story of cultural bravery.