Audrey Hepburn and Rex Harrison star in My Fair Lady, one of Hollywood’s most beloved musicals. Director George Cukor wisely adapted the popular Broadway smash with the same cast from the stage with one major exception – actress Audrey Hepburn controversially replaced Julie Andrews as female lead.

It’s hard imagining else anyone playing Eliza Doolittle but Audrey Hepburn after her spirited portrayal won over everyone, critics and audiences alike. Andrews wouldn’t miss the screen role, winning an Oscar the same year for Mary Poppins, before starring in The Sound of Music just one year later.

Funny and lively, My Fair Lady is nearly three hours of singing and extravagant set pieces that still dazzle with Hollywood magic. Best Actor winner Rex Harrison reprises his signature role of professor Henry Higgins, a self-absorbed and pompous phonetics teacher who bets his friend Colonel Pickering he can transform a simple cockney flower girl into a lady fit for high society, passing her off as a regal duchess at the upcoming royal Embassy Ball.

Legendary Hollywood icon Audrey Hepburn is Eliza Doolittle, a feisty commoner from the streets of London. Crude and uneducated, Eliza starts developing feelings for the demanding and aloof Higgins. One of Audrey Hepburn’s best loved roles, she adds a note of humanity and grace to My Fair Lady with her unparalleled elegance. Stanley Holloway memorably plays Eliza’s father, a rather uncouth man that mostly uses his daughter for money.

The sumptuous production is filled with catchy and memorable songs from Lerner and Leowe such as The Rain In Spain. It’s notable that Audrey Hepburn wasn’t a singer, so her songs are smoothly dubbed by Marni Nixon. Half the magic in My Fair Lady are the delightful songs, especially the interplay between Higgins and Doolittle as the situation blossoms into romance.

My Fair Lady is a beautifully crafted stage musical brought to the silver screen with amazingly talented performers Rex Harrison and Audrey Hepburn. Stunning set pieces and indelibly entertaining performances highlight one of Hollywood’s most successful stage to screen adaptations. 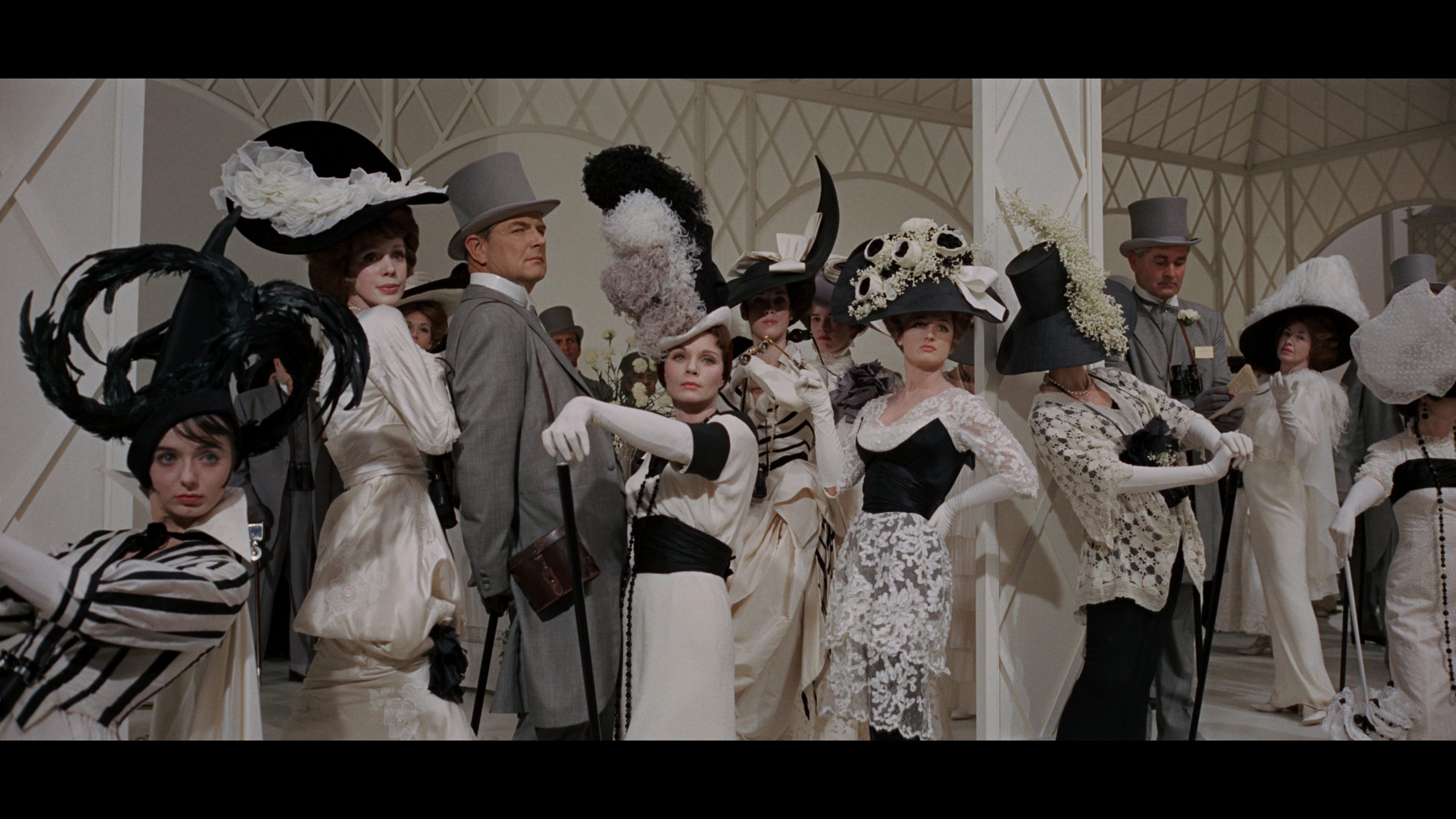 My Fair Lady is a mesmerizing showcase for UHD’s benefits. Filmed in Super Panavision 70, the 65mm camera negative was carefully scanned at 8K resolution for a brilliant 4K film transfer bestowed with an excellent HDR tuning in lovely 12-bit Dolby Vision. The photochemical film restoration was overseen by esteemed film preservationist Robert Harris a few years back, producing a completely faithful and film-like video transfer. The texture, highlights, unfiltered detail, shadow delineation and clarity are astounding for vintage film, a true delight on a fully-calibrated OLED or big-screen display for classic film lovers.

Running nearly 173 minutes, Paramount generously authors the 2.20:1 presentation with fully transparent HEVC on a triple-layer UHD. The glorious Dolby Vision grading brings out an accurate and realistic color palette that is simply impossible in the limited color gamut found on Blu-ray. The 4K transfer runs circles around the same raw transfer used on the 50th Anniversary BD. Especially noticeable are the intricate set pieces like the horse race and Embassy Ball, pulling out previously unseen details in the set designs and costumes.

Amazingly sharp with immense depth and incredible definition, My Fair Lady looks stunning on 4K UHD and earns a rare perfect score. This is a first-rate, flawless cinematic presentation with complete authenticity. It’s good enough to be the final word on the film.

Sourced from the movie’s original six-track magnetic masters made for roadshow versions upon release, the UHD contains the same restored and magnificent audio found on the 50th Anniversary Blu-ray edition. Replicated in 7.1 Dolby TrueHD, the songs sound better than ever in astonishing fidelity and magnitude. It’s a careful mix that rarely reveals any sonic limitations for a musical soundtrack recorded in 1964.

Dialogue emanates from the front soundstage with clean, precise clarity. Singing is placed upfront with musical backing often moved towards the rears. Conductor and composer Andre Previn commands the striking musical score which won an Academy Award, including an intermission, with exacting passion.

Some effort has been made not to tamper with the movie’s original musical fidelity. It’s a big-budget, well-recorded Hollywood effort made by experienced musicians at the top of their game. A musical lives and dies by its sound quality and My Fair Lady gets a rich, rewarding surround mix for a 1964 production.

The UHD contains a massive amount of dubs and subtitles. Fourteen different subtitles are offered, including English and English SDH among a litany of global choices. 2.0 mono Dolby Digital dubs include French, German, Italian, Japanese and Spanish audio.

Paramount has pulled off a little piece of trickery here if you are thinking about splitting up the set for re-selling purposes. The 4K UHD retains all the special features found on the 50th Anniversary Blu-ray on a separate Blu-ray disc, which doesn’t actually contain the feature film. The UHD itself is barebones. So this 4K UHD release is strictly intended for 4K users. The two-disc package arrives with a slipcover and a digital copy which redeems in UHD quality on VUDU, FandangoNow or iTunes.

Devoted My Fair Lady followers may notice the group commentary with Robert Harris and singer Marni Nixon found on the original Blu-ray from a decade ago is absent once again. It was left off the 50th Anniversary disc as well.

More Loverly Than Ever: The Making of My Fair Lady Then & Now (57:58 in HD) – An extensive documentary

Production Tests (All in HD):

Wouldn’t It Be Loverly?

Comments on a Lady (SD):

Trailers (All in HD):

One of Hollywood’s classic musicals with impeccable performances by Rex Harrison and Audrey Hepburn commanding the screen in unabashed joy.