The lush, otherworldly animation of Studio Ghibli meets fables pulled from Japanese folklore in the amazing Spirited Away. Starring a plucky young girl surviving fantastical adventures in the spirit realm, it is a delightful tale that continues to inspire and amaze fans of all ages.

There are few things better in cinema than the simple charm and joy of a fully realized Studio Ghibli movie. Under the guidance of Hayao Miyazaki, the 2002 animated film met with instant acclaim and quickly became one of the most popular Japanese films of all time. In the plastic cinema often pushed by Hollywood, everything smacks of a corporate agenda often decided by committee.

Miyazaki’s films have naturally developed characters presented with intelligence and thoughtfulness. That is a rare combination, and even more rare when the material proves entertaining for all ages. Supported by the beautiful animation, the magical alchemy of Miyazaki’s storytelling and his wonderfully idiosyncratic characters weaves its spell on fans.

Considered in some circles as Hayao Miyazaki’s most realized masterpiece in his incredible career, Spirited Away is a wondrous fantasy about a courageous young girl. Chihiro gets trapped in a strange world of spirits, on her own without any protection. There she discovers a mysterious bathhouse run by the intimidating witch Yubaba. After her parents run into trouble, Chihiro is aided by a kind stranger that may help her save them from Yubaba.

Spirited Away is a spectacular animated journey to a world of magic and adventure, filled with Studio Ghibli’s usual array of friendly and likable characters. It’s innocent without pandering to juvenile minds, refreshingly honest and joyous. Chihiro is lovable and Haku develops into one of Miyazaki’s most realized characters.

If you enjoy animated cinema, you owe it to yourself to watch Miyazaki’s Spirited Away. 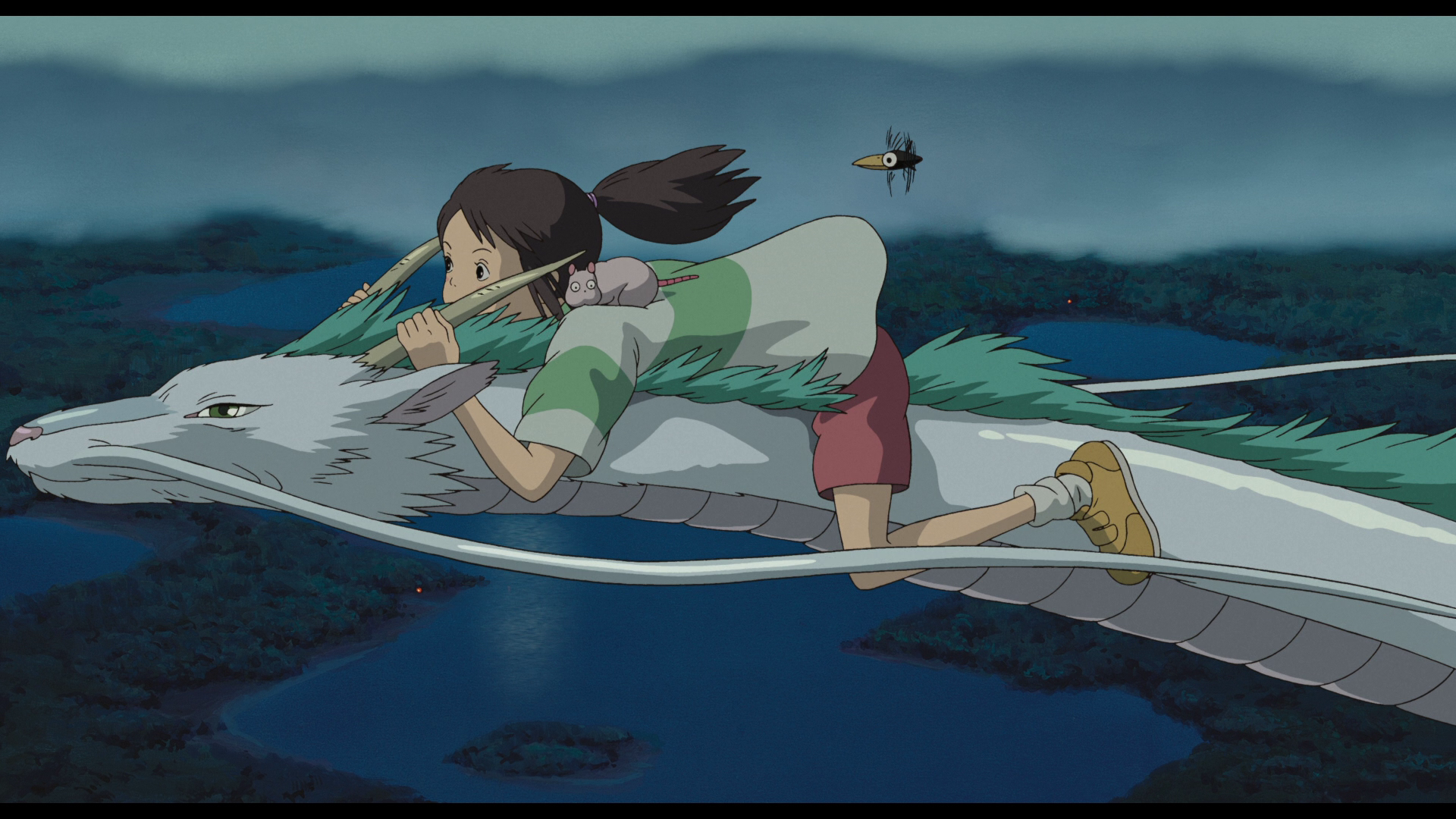 Filled with astonishing beauty, the Oscar winner’s animation doesn’t quite pop compared to Studio Ghibli’s best-looking films in terms of HD goodness. The palette is ever so slightly duller, though it still has incredible moments of breathtaking scope for theatrical animation.

Being identical to the earlier BD put out by GKIDs, Spirited Away looks fantastic in this stunning, faithfully remastered transfer. The crisp saturation and balanced contrast show off Studio Ghibli’s artwork, presented in gorgeously pristine 1080P resolution. Spirited Away has a few of the more memorable-looking character designs in Studio Ghibli history, including No-Face and Yubaba.

The main feature runs over two hours at 124 minutes. It is encoded in AVC, fully rendering the 1.85:1 video without artifacts. Shout Factory and GKIDS made sure their encode would operate at higher parameters than the Disney BD.

Carrying over the same audio options found on the prior GKIDS release and Disney BD, the Disney-produced English dub sounds as good as ever in 5.1 DTS-HD MA. It’s a stout surround mix with resounding clarity and energy. Moments such as Haku’s battle take center stage in the mix, delivering effective immersion and an expansive soundstage.

Led by a voice cast that includes Daveigh Chase (Chihiro), Suzanne Pleshette (Yubaba), Jason Marsden (Haku), Susan Egan (Lin), Lauren Holly, John Ratzenberger, and Tara Strong, it’s one of anime’s finest English dubs. This is one case where the English audio is a first-rate alternative to the native Japanese dub and the preferred option for English speakers.

The original Japanese audio comes in 5.1 DTS-HD MA. While a shade behind in aggressiveness and discrete activity than the 6.1 audio found on the Japanese BD, it offers marvelous separation and precise surround imaging. Joe Hisaishi’s score comes alive with thundering LFE output. Clean, intelligible dialogue is nicely balanced with the wider sound design elements. Loaded with directional cues, the immersive mix sweeps you away at Yubaba’s bathhouse.

Optional English SDH, French and a second set of English subtitles directly translating the Japanese dialogue are included. They play in a white font. A French dub is available in 5.1 Dolby Digital.

For Studio Ghibli collectors, this deluxe Spirited Away Collector’s Edition smoothly fits on your shelf next to earlier collector editions for My Neighbor Totoro and Princess Mononoke from GKIDS. GKIDS and Shout Factory gives Miyazaki’s beloved classic special treatment with this lavish collector’s edition in deluxe packaging.

Mirroring their earlier releases, Spirited Away arrives in a two-disc set which includes the remastered GKIDS Blu-ray and the movie’s soundtrack on CD. A thick book-like case holds the discs, inside a lavish slipcase with the new booklet.

The limited-edition set comes housed in an elegant hard slipcase, with a new 40-page book with stunning art and essays. The BD is locked to Region A.

The Blu-ray itself duplicates their earlier regular edition with identical special features. Exclusive to this package are the CD, which can only be had in North America through this set, and the gorgeously illustrated booklet, packed with essays from Hayao Miyazaki, Studio Ghibli producer Toshio Suzuki, Leonard Maltin, and others.

Feature-Length Storyboards (124:35 in HD) – The original storyboards for the entire movie. This is an excellent example for aspiring animators looking to craft a movie.

Behind the Microphone (05:43 in SD) – An earlier archival featurette about the English dub created by Disney. It goes over the ADR process, interviews the dub’s director Kirk Wise and John Lasseter, and includes footage from behind-the-scenes of dub cast members such as Suzanne Pleshette recording their lines.

Original Japanese Theatrical Trailers (17:59 in HD) – Eight trailers in all.

Another animated masterpiece from the legendary Hayao Miyazaki at the top of his game.

The 15 unaltered images below represent the Blu-ray. For an additional 37 Spirited Away screenshots, early access to all screens (plus the 100,000+ already in our library), 100 exclusive 4K UHD reviews, and more perks, support us on Patreon.