It’s relevant to Ebirah, Horror of the Deep. The setting is a small island. It’s controlled by a brutal force called Red Bamboo. Forcibly, Red Bamboo takes natives from Mothra’s home Infant Island, enslaving them, this while the imperials produce nuclear weapons. Note that in 1966 at the time of Ebirah, small contingents of Japanese continued fighting on outlying islands. Here, Red Bamboo stand in for those refusing to relent, while preparing a nuclear counterstrike, likely against the US.

That, or Red Bamboo is the US, who post-WWII (and still today) occupy Okinawa, using it as military base. Ebirah, Horror of the Deep isn’t without that suggestion either. Either interpretation is valid.

Because of chintzy production values and lifeless creature duels, it’s easy writing off Ebirah, Horror of the Deep

Less than a decade before Ebirah, Horror of the Deep, Japan formalized their Tomb of the Unknown Soldier. That’s lightly contextualized here too, with Ryota (Toru Watanabe) firmly believing his lost brother is still alive. Ryota’s mother seeks psychic help to preserve her denial in the opening scene; Ryota needs only that superstitious belief to go on the hunt.

With that dark subtext, this becomes a wily, even goofball monster movie. Bits of Bond play into this story, if with an eclectic character set replacing the British spy. Composer Masuro Sato returns to the Godzilla series (after Godzilla Raids Again) and composes a breezy, chipper score. At times, the ‘60s jigs sound entirely inappropriate, but the rest delivers a comfortable, sunny disposition.

The monsters barely matter. Godzilla doesn’t show up until 50-minutes in, for the better since the suit is dire. When he is on screen, it’s hardly the beast audiences knew, carrying King Kong-like mannerisms since the ape was famously intended to fight the title lobster. Although an inspired creation, Ebirah is even less than a plot device, more a convenience. He’s in the ocean to keep everyone trapped on shore.

Because of those chintzy production values and lifeless creature duels, it’s easy writing off Ebirah, Horror of the Deep. Under that however (plus the splashy color design and high-spirited score), there’s an empathetic story. Okinawa’s wartime story remains a tragedy, and through Mothra’s worshipers, Ebirah, Horror of the Deep is able to convey that via audience-grabbing pop cinema. 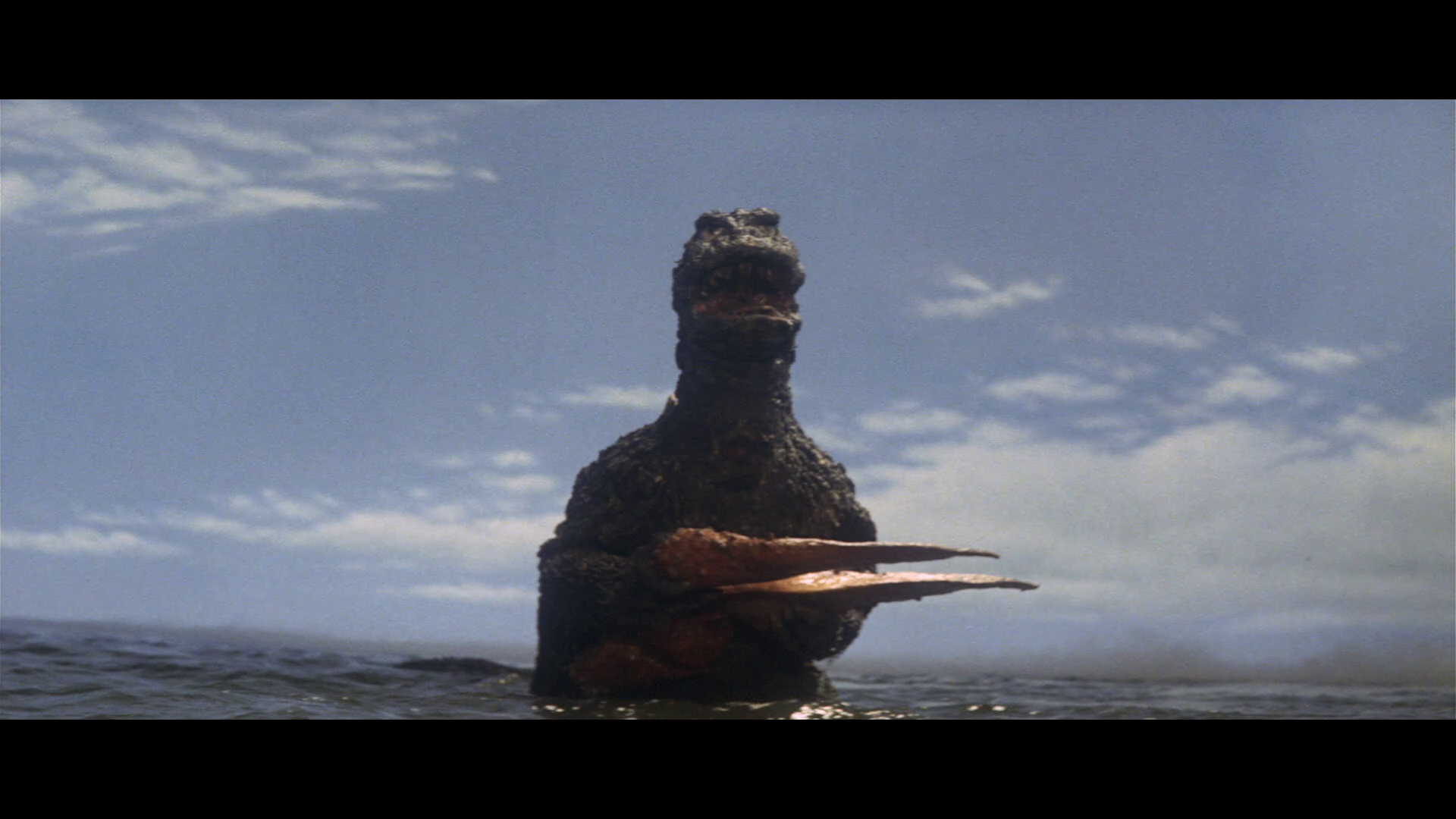 This is the second go round for Ebirah, Horror of the Deep. The first came from Kraken Releasing with the US title, Godzilla vs the Sea Monster attached. Criterion uses a different master, with more reserved (and natural) color grading. A spot or two of yellowing gives the presentation age, if within acceptability.

The key difference between the two Blu-rays is Criterion’s accuracy to a filmic source. Grain looks natural and well managed. No digital tampering interferes and while that leaves a softer look behind, the appeal lies with the pure film aesthetic. Organic detail gives better texture to close-ups and visual effects. Visible definition on Godzilla’s suit jumps out.

Dynamic saturation and contrast embolden the island setting. Ebirah, Horror of the Deep maintains brightness, and when night falls, black levels kick in. There’s substantial depth here. After the Invasion of Astro Monster’s dim transfer on the previous Showa Era Collection disc, this is a step up. The master looks newer and up to date.

While a little wobbly with treble, the DTS-HD mono track holds most of this mix together. An imbalance issue (that made some dialog inaudible under the score) on Kraken’s Blu-ray is resolved. Oddly, it’s the native’s Mothra song that brings this down. Drums crumble in the low-end, while chanting sounds garbled. That’s not true for anything else in this mix.

Toho’s stock audio effects stand up to time, and dialog holds firm. Note this presentation is Japanese only; no dub is offered.

Ebirah, Horror of the Deep

Although easily mocked and disregarded, Ebirah, Horror of the Deep turns a WWII tragedy into a digestible piece of pop cinema.

The 15 unaltered images below represent the Blu-ray. For an additional 24 Ebirah, Horror of the Deep screenshots, early access to all screens (plus the 100,000+ already in our library), 100 exclusive 4K UHD reviews, and more, support us on Patreon.