Over 144,000 hand-drawn animation cels created Princess Mononoke’s intricate world and made its compelling characters come to life on the screen. The epic animated masterpiece by Hayao Miyazaki, acclaimed co-founder of Studio Ghibli, was a Japanese box office sensation upon release and has dazzled audiences across the world since its debut in 1997.

First brought to America by Disney in a star-studded English dub headlined by Billy Bob Thornton and Claire Danes, some consider Princess Mononoke the finest animated feature made since Walt Disney’s original classics in the 1940s and 1950s. Constructed with an artistry unseen in Western animation these days, the movie’s unforgettable storytelling matches the stunning animation. A complex tale of man fighting nature, Miyazaki wrings pathos from his characters and inspires awe with conviction.

Princess Mononoke’s engaging characters, touching humanity and breathtaking animation have made it one of the most popular Studio Ghibli movies with fans. Crafted by director Hayao Miyazaki on top of his game, the care and attention to detail translate to an amazing animation experience. The traditional hand-drawn animation represents the pinnacle of the medium.

A fable of humans living in a pre-feudal Japan alongside animal gods and murderous demons, the deadly scourge of a new technology threatens to upset the delicate balance between man and nature. Lady Eboshi runs Iron Town, a mining operation stripping the local forest of resources to produce bullets for muskets.

Inflicted with a deadly curse that drives him from his village, a young warrior named Prince Ashitaka sets out west in search of a cure to save his life. His adventures will introduce him to many wondrous sights and troubles along the way, aided by an appreciation for nature and his many skills as a warrior.

Ashitaka becomes entangled in a nasty struggle that matches the proud Lady Eboshi and a clan of humans against the forest’s animal gods, who are led by the fierce Princess Mononoke, a young woman raised by wolves. Loyal to the wolves, the feral girl lashes out at the humans aiming to harm the forest and mine its resources. The mighty but aloof Deer God protects the forest but seems uninterested in the conflict. This monumental struggle between man and nature lies at the heart of Miyazaki’s masterpiece.

Fundamentally a statement on human progress versus the cost to nature, Studio Ghibli fans versed in Miyazaki’s other films will recognize the director’s familiar themes. The director himself has said that Princess Mononoke is not a movie for young children and its moments of violence will shock Western audiences unused to seeing it happen in animation.

The morally ambiguous narrative and mixed motivations are what make Princess Mononoke such a unique fantasy adventure. The movie is more a cautionary tale than a standard heroic adventure. Ashitaka and the princess perform heroic tasks as they work to save the forest, with their motivations usually pure, but there’s a sense in the grander scheme they aren’t the center of this complex fable. That is the dying of the forest at the hands of humans, as civilization progresses and slowly consumes the purity of nature.

Everything comes together perfectly in Miyazaki’s animated classic and certified the director of My Neighbor Totoro and Spirited Away as the biggest thing in animation since Walt Disney’s heyday. There is a serious argument to be made that Princess Mononoke is the greatest Japanese film ever made, competing with other classics such as Seven Samurai and Rashomon.

A haunting, lyrical ode to the clash between progress and nature, Princess Mononoke remains a venerable animated epic that stands as a landmark in the medium. 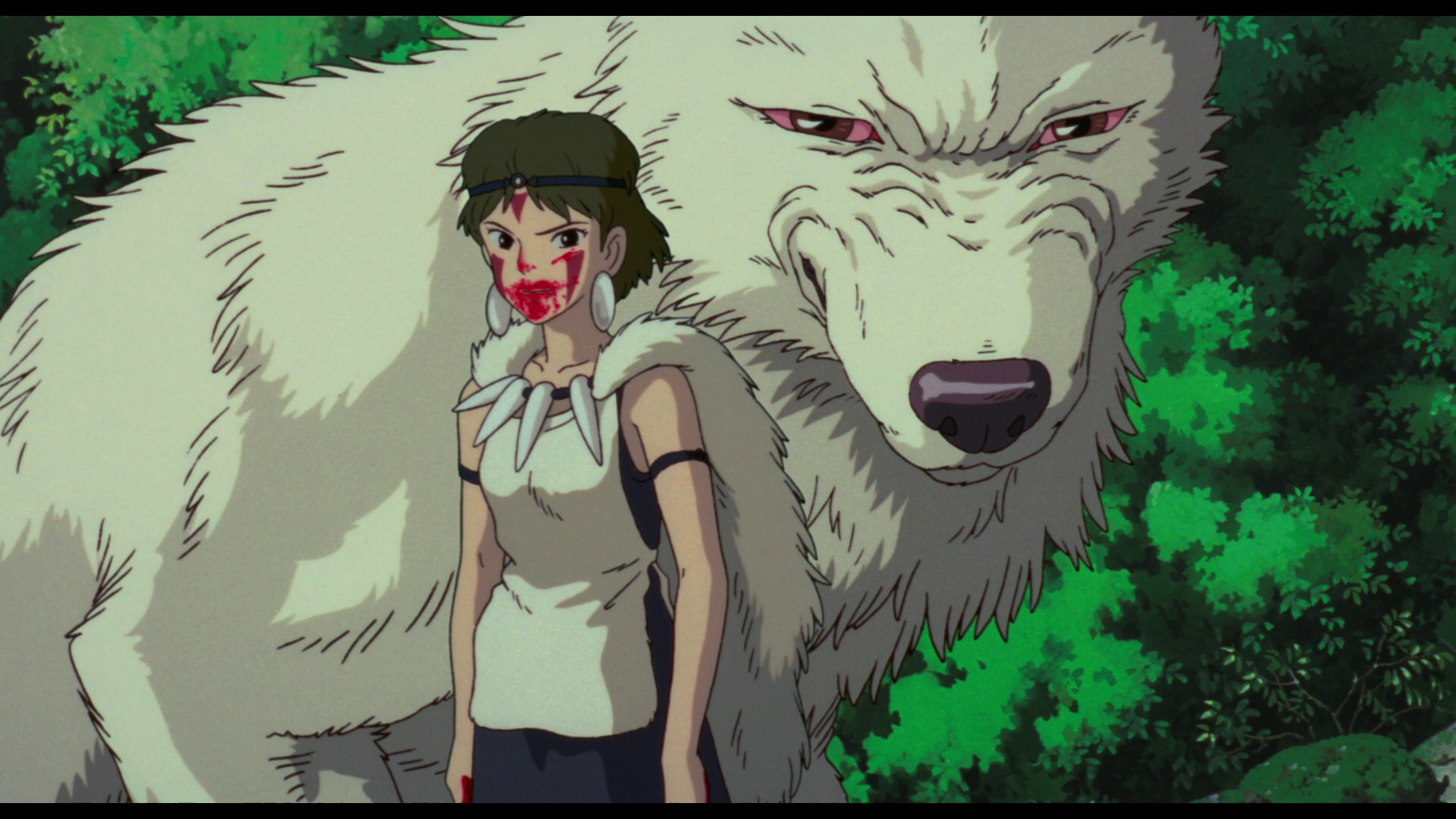 GKIDS and Shout Factory have tackled their Studio Ghibli releases with an eye on improving the video quality found on the original Disney discs. In that regard, they’ve clearly succeeded. This is a technically perfect transfer and the film is presented in pristine condition.

Princess Mononoke is fantastic eye candy and the cel animation breathes with incredible clarity in 1080P video. Every fan will be happy with this disc until the movie hits UHD, whenever that is decided by Studio Ghibli. The extant film transfer captures every nuance in the cel animation without processing.

It should be noted that Disney invested significant resources into the English dub back in the 1990s, casting popular stars at the time like Claire Danes for Princess Mononoke, Billy Crudup as Prince Ashitaka and Billy Bob Thornton. They also brought in acclaimed author Neil Gaiman to help supervise things in the English script. It’s not a bad job (Billy Bob is definitely the weakest link) but the Japanese soundtrack is preferred by most anime fans as being more authentic. As someone with an ear for the Japanese language, the Japanese voice cast fit their defined roles far better. Disney definitely shaped the English dub more for children.

A French dub is available in Dolby Digital 5.1. Optional English SDH, English and French subtitles all play in a white font. The English SDH are dubtitles, merely captioning the English dub’s dialogue. The second set of English subtitles are a proper translation of the intended Japanese dialogue, provided by Studio Ghibli itself to GKIDS.

GKIDS and Shout Factory gives Miyazaki’s beloved classic special treatment with this lavish collector’s edition in deluxe packaging. The set includes an exclusive 40-page book and the rare CD soundtrack, for the first time in North America. While the actual disc’s contents duplicate GKIDS’s prior Blu-ray release of Princess Mononoke, the superb limited edition package houses the movie in a deluxe portfolio with a hard outer slipcase, and an inner booklet that makes it look like a storybook. Lined with breathtaking art from Princess Mononoke, this is far better than the cheap deluxe editions often foisted on us by Hollywood. It’s clear that GKIDS respects the movie and given it top-notch treatment.

If you lust after attractive, eye-catching graphic design, this is one of the best-made collector’s editions to come around in ages. The package is similar to last year’s collector’s edition for My Neighbor Totoro and complements that gorgeous set on your shelf. Studio Ghibli collectors, this is more or less an essential purchase.

Hitting North America for the first time, composer Joe Hisaishi’s marvelous score comes on CD in the package. It has 33 tracks, running over 63 minutes. Recorded by the Tokyo City Philharmonic Orchestra, the rousing score sounds fantastic and worth the price of admission nearly by itself. This is one of Studio Ghibli’s finest scores.

If you are looking for in-depth, behind-the-scenes material, director Toshiro Uratani’s documentary Princess Mononoke: How the Film Was Conceived is the gold standard for this movie, but has only ever seen release in Japan itself. So seek that one out if you want to delve into the movie’s exacting creation. This set brings over the same supplementary content found on the original Disney Blu-ray, which is light on commentary and analysis. The feature-length storyboards are an animation lover’s dream and a blueprint for aspiring animators everywhere.

Full-length Japanese Storyboards (133:28 in HD) – The original storyboards and drawings from Studio Ghibli play for the entire movie. It’s an incredibly interesting special feature, if of limited appeal outside of animation enthusiasts. Watch as the dialogue syncs with the rough sketches and the movie takes shape. A wonderful teaching tool for young filmmakers.

“Princess Mononoke in the USA” Featurette (19:55 in HD) – An archival featurette made for the Japanese market. In September of 1999, Hayao Miyazaki traveled to the US and Canada to promote the film’s American release. A camera crew follows Miyazaki from the Toronto Film Festival to his tour of Disney’s animation facilities in Hollywood. It has a brief interview clip of Roger Ebert discussing Miyazaki’s films with the director. In mixed Japanese and English audio with English subtitles when necessary.

“Behind the Microphone” Featurette (05:13 in SD) – An archival featurette from Miramax/Disney with the English voice cast discussing the film. It sees Jada Pinkett Smith, Claire Danes, Billy Bob Thornton, Gillian Anderson, and Billy Crudup discussing their approach to voice acting in Princess Mononoke.

Another animated masterpiece from Studio Ghibli by Miyazaki, exploring fantasy themes and the erosion of nature by mankind.

The 15 unaltered images below represent the Blu-ray. For an additional 45 Princess Mononoke screenshots, early access to all screens (plus the 20,000+ already in our library), 75+ exclusive 4K UHD reviews, and more, support us on Patreon.