Many television shows hit a sophomore slump after a strong first season. Airing on Paramount Network as their lone prestige drama, Yellowstone hit the ground running with a gripping first season under the guidance of Hollywood screenwriter Taylor Sheridan (Sicario). Starring Kevin Costner as the ruthlessly controlling John Dutton, the ruggedly compelling drama about a Montana ranch became a cable smash with critics and fans alike.

Season two of Yellowstone avoids any sophomore jinx with gritty storytelling and some of the most ferocious story-lines seen on cable since The Shield. Easy to miss with the ever evolving cable landscape and rise of streaming services, Yellowstone has flown under the radar to become the best drama on cable.

The Dutton Ranch sees more pressure from outside forces in the intelligently plotted season two, pulling John Dutton and his adult children into proverbial war with the nearby Indian gaming casino and a growing new threat from outsiders. They won’t start a fight, but the tough-minded John Dutton is willing to end the challenge by any means necessary if it threatens his ranch and family. When his cattle end up mysteriously dead, a complex investigation leads the family down a dark path.

Businessman Malcolm Beck (Neal McDonough) comes to town playing for keeps. After offering an alliance and getting rebuffed by John Dutton, old enemies like Dan Jenkins surface. Posing a threat to everyone in the Dutton family, the stakes are higher than ever for everyone involved. Even the innocent such as Kayce Dutton’s young son are fair game in this wicked struggle to control the valley.

After Costner, the impressive cast includes Luke Grimes, Kelly Reilly, Wes Bentley, Cole Hauser, Kelsey Asbille, Brecken Merrill, Jefferson White, Danny Huston and Gil Birmingham. Kelly Reilly’s Beth continues to steal the spotlight in season two. The tough-as-nails daughter of John Dutton is a merciless woman that intimidates anyone that crosses her. The actress gives a bravura performance in the season’s most memorable episode, and should be rewarded with an Emmy. It’s one of 2019’s most shocking and memorable acting turns.

Beth’s relationship with Rip (Cole Hauser) comes under more focus in season two, humanizing both characters. The laid-back Rip is the perfect complement to Beth and Hauser quietly serves as the rock of Yellowstone’s gripping drama. One of the most well-developed and genuine relationships on television, it’s a real highlight in this season.

Excellently paced with a keen sense of character development, writer Taylor Sheridan has crafted a top-notch drama. Everything fits together perfectly with a superior cast delivering superb performances. Yellowstone actually improves upon its solid first season with a more urgent sense of action and bold plotting. Kevin Costner is fantastic playing the stoic and reserved rancher John Dutton, a role perfectly suited for his talents. 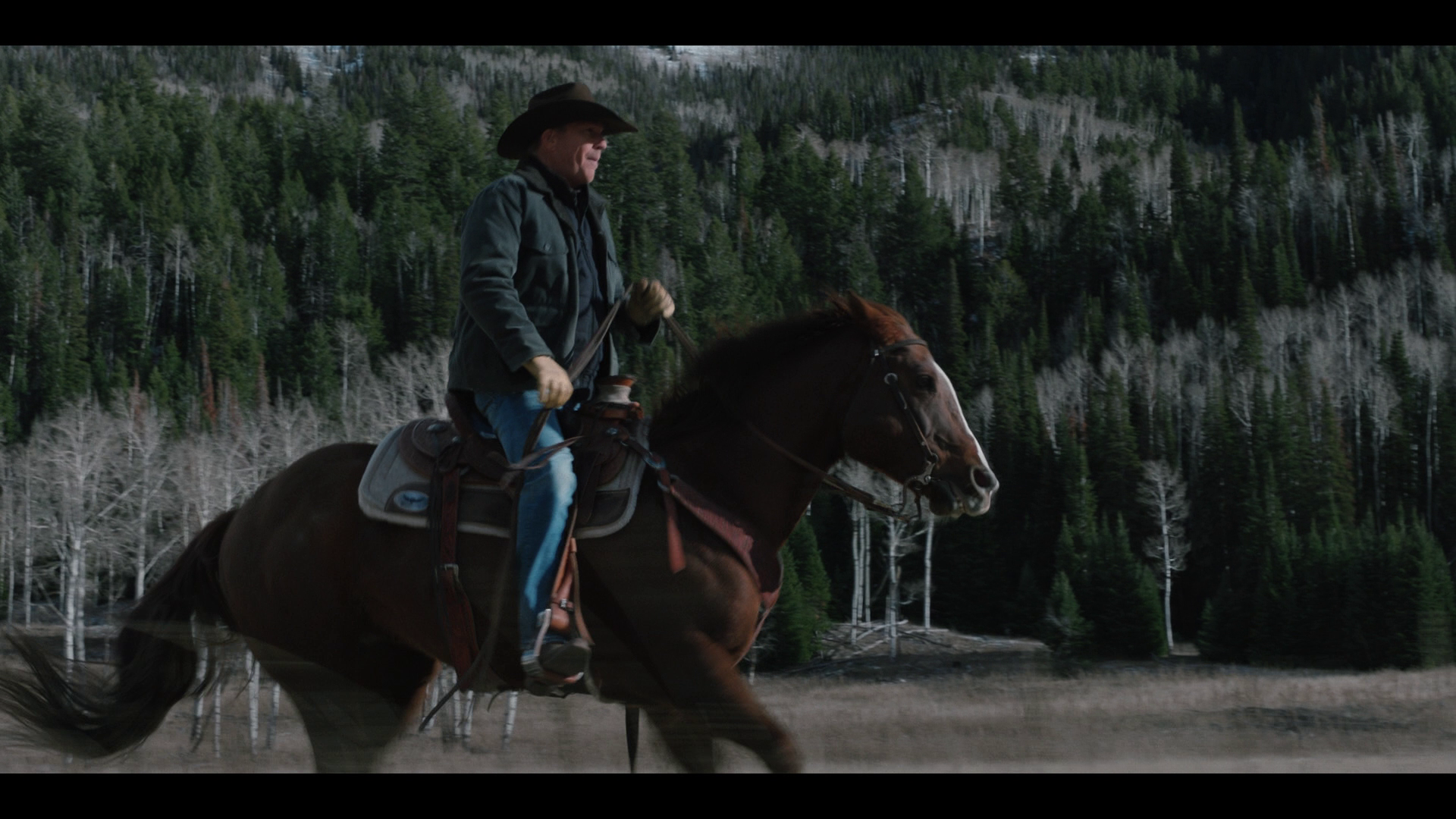 Yellowstone is a gorgeous show, filmed with razor-sharp definition on location in Utah, standing in for the rugged hills of Montana. The pristine 1080P presentation exudes clarity and abundant high-frequency detail. A technically perfect, unfiltered transfer by Paramount leaves no room for artifacts and crisp HD imagery. Ranch life has never looked this good or pretty. Yellowstone continues its excellent production values and the strong picture quality reflects careful digital cinematography overseen by experienced filmmakers.

Yellowstone has a fairly conservative surround mix, largely kept towards the front soundstage. The 5.1 Dolby TrueHD audio has crisp, intelligible dialogue and a gently dramatic underscore. Light immersion and surround activity is offered, more ambient in nature than discrete. The audio design opens up when necessary, pushing a heavier low end with adequate dynamics. This comes into play when Jimmy enters the rodeo and other action-heavy scenes.

Optional English SDH subtitles play in a white font, inside the 2:00:1 aspect ratio at all times.

Paramount goes the extra mile for Yellowstone’s acclaimed second season, loading the three-disc set with a plethora of special features and captivating interview clips. Studios these days barely put any effort into home video for their TV releases. Most releases these days are lucky to get a few short EPK featurettes.

Yellowstone is a clear exception to these trends, getting its entire primary cast, including Kevin Costner, to sit down for lengthy and thoughtful interviews. Every notable cast member appears and contributes. The missing elephant in the room is creator and showrunner Taylor Sheridan himself, who doesn’t show up that much in the special features, unlike last season’s BD release. We see glimpses of him on set and directing behind the scenes.

A slipcover is available and the normal Blu-ray case matches Yellowstone’s first season BD. Like most Paramount releases, the Blu-rays are coded for all regions.

Costner on Yellowstone: Season 2 (03:06 in HD) – An interview with Kevin Costner on the challenges facing his character in season two and how things have changed since season one.

Working the Yellowstone: Fight Choreography (02:53 in HD) – Wade Allen, head fight choreographer for the show, explains his method for staging a fight and other topics.

Only Devils Left – Making Yellowstone: Season 2 (30:22 in HD) – An in-depth, behind-the-scenes documentary with cast interviews and footage from set. The cast deeply respects show creator Taylor Sheridan’s ability for writing these characters in such compelling fashion.

Stories from the Bunkhouse (All in HD) – Each episode of the season receives its own focus from a round-table discussion of the three supporting actors that play ranch hands on the Dutton Ranch, including Jefferson White that plays Jimmy. Ten segments in all, ranging anywhere from six to ten minutes apiece. Topics include how scared they were filming cowboy poker, learning to ride a horse and their views on the major plot developments of season two. Refreshingly smart without being dry, the three actors provide good discussion about each episode of Yellowstone.

Paramount Trailers (03:08 in HD) – Trailers for Star Trek: Discovery Season Two and Clooney’s Catch-22 play before the main menu of disc one.

Behind The Story – Each episode from season two receives its own extended featurette, listed below, with insightful cast interviews reflecting on their characters and developments seen that episode. Everyone from Wes Bentley to Cole Hauser provide insights on their characters in thoughtful depth. Some of the better behind-the-scenes featurettes ever made for a television program.

Kevin Costner’s compelling cable drama gets even more thrilling in this second season with brutal plot developments and better action.

The 15 unaltered images below have been taken directly from the Blu-ray. For an additional 41 Yellowstone: Season 2 screenshots, early access to all screens (plus the 100,000+ already in our library), 100 exclusive 4K UHD reviews, and more perks, support us on Patreon.