Hollywood star Ethan Hawke steps behind the camera for Blaze, a personal passion project about a subject near and dear to his hometown of Austin, Texas. Directed, co-written, and produced by the actor, Blaze is inspired by the life of Blaze Foley, an unsung songwriter and musician of Blues and Country in the “Outlaw” music scene that arose from Austin. Names such as Willie Nelson, Kris Kristofferson, and Waylon Jennings were all called outlaws in this tradition for their personal brand of idiosyncratic country music that wasn’t accepted by the Nashville music establishment.

Blaze’s storytelling weaves together three different periods in the musician’s life. From his romance with first wife Sybil Rosen, to his friendship and playing with the legendary Townes Van Zandt, the man’s music and personal life are fused together in mesmerizing direction. It also explores the darker side of Blaze Foley’s mercurial personality and self-destructive behavior.

The indie project stars Ben Dickey as the troubled but brilliant musician in his acting debut, which earned him an Achievement in Acting award at the Sundance Film Festival. Actress Alia Shawkat plays Sybil Rosen, Blaze Foley’s first wife and muse for much of his songwriting. Blaze’s romance with Sybil is the prism through which we meet and understand the man, and eventually his music. Rosen’s memoirs served as the source material and Rosen herself is credited as co-writer on Blaze. Charlie Sexton plays a lean Townes Van Zandt, the hard-drinking Austin music legend. Some of the best lines in Blaze are straight from Van Zandt’s own mouth.

…a personal, intimate portrait of a troubled but gifted songwriter told with joy and reverence

The different arcs in Blaze explore Foley’s relationship with Sybil Rosen over the years; a speculative guess at his last night on Earth; and of course his personal brand of dusty country music. A telling moment comes when he’s heckled out of a club for allegedly ripping off John Prine, when in fact the song was pure Blaze Foley.

You have to give Ethan Hawke immense credit as a filmmaker for Blaze. This is his baby and he’s constructed it from the ground up. Crafting complex characters with emotional texture and layered realism is demanding enough in filmmaking, much less adapting the lives of real and well-known musicians. Blaze doesn’t always take the easy way out by providing neat and tidy answers. It sketches a human portrait of Foley by celebrating his music, not sugarcoating the truth. It is an examination of the man and his outlook on life.

The musical performances have been performed live by actual musicians. What you are hearing and seeing is not a post-production dub job. That is musician and songwriter Ben Dickey actually performing as Blaze on stage, which adds a touch of honesty usually missing in musical biopics. Almost all the music in Blaze is either from Townes Van Zandt or Blaze Foley.

Blaze is a personal, intimate portrait of a troubled but gifted songwriter told with joy and reverence. Hawke obviously loves the music and does Foley’s life justice in this captivating biopic. It’s a musical tour de force for any self-respecting Outlaw country music fan. 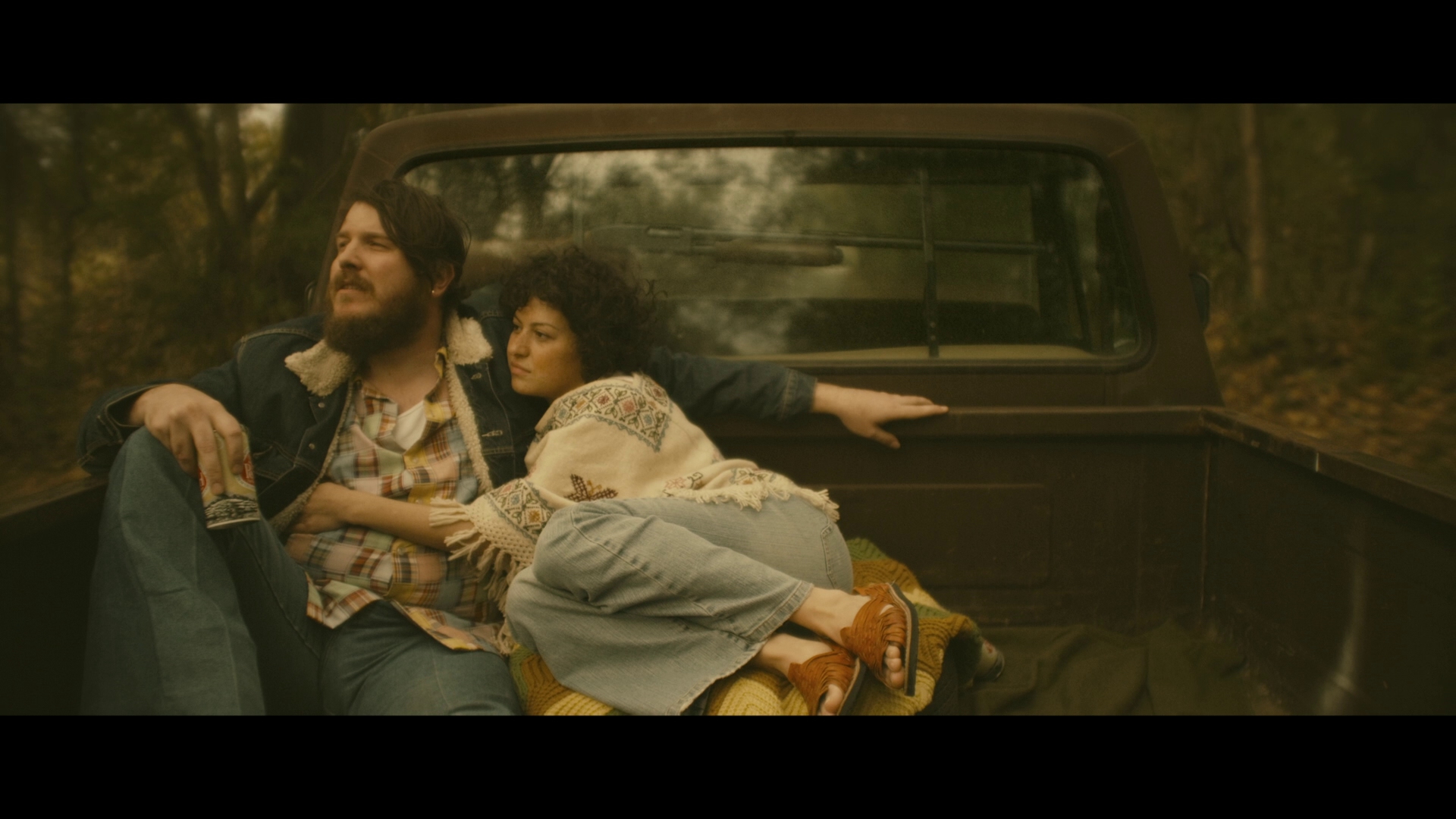 Blaze was made on a micro-budget by today’s standards, clocking in at slightly over one million dollars. Normally that produces erratic video and questionable definition. It helps that Hollywood star Ethan Hawke is backing the film and the production has been made by experienced hands, giving the indie project much higher production values than its budget would indicate.

Blaze was shot with the impressive RED Epic Dragon camera at 6K resolution. That doesn’t automatically make it reference-caliber video, but the raw footage has impressive natural clarity and definition. It exudes texture and detail most of the time.

More pertinent for its actual picture quality is a highly stylized color grading. The aggressive digital color grading isn’t afraid of strong palettes and unbalanced tints – flashbacks between Blaze and Sybil have a drastic honey amber tone for example. Inside the world of Austin’s tiny bars and music clubs, Blaze performs his songs bathed in an eerie red glow. Some moments have a sickly yellow-green tint. The grading is definitely part of the film’s changing mood and storytelling.

The cinematography has a studied, even hand with some thought given to compositions nicely capturing intimate moments. Black levels do suffer at times from the moody lighting and changing color grading. They are a bit muddy and dull, never quite reaching pure darkness. This is not a great disc if you want superior shadow delineation.

Shout Factory’s transfer and presentation are not an issue for the 2.39:1 movie. The 128-minute main feature is encoded in serviceable AVC on a BD-50. A couple of the darkest scenes have clear banding and chroma noise. The encoder could have tightened up a handful of obvious compression issues, but overall it’s not a significant problem.

Music is integral to the score and soundtrack of Blaze, which you would expect. The movie primarily features the dusty blues and country music of Blaze Foley and underground country legend Townes Van Zandt. Light In The Attic Records has issued the movie’s music and soundtrack performances on CD and LP.

Blaze first found himself as a performer in Austin, Texas, considered by many to be ground zero for the Outlaw Country movement popularized by such legends as Willie Nelson and Kris Kristofferson. Actor and performer Charlie Sexton, portraying Van Zandt, oversaw the film’s music production.

The interesting and unique thing in Blaze is that musician Ben Dickey makes his acting debut here as Blaze Foley and actually performs the songs himself on camera. Perfectly captured in the film is the spirit of Blaze Foley’s music. There’s an amazing moment near the end when Van Zandt is playing his most famous song, Pancho and Lefty, at a small club and Blaze picks up one of the verses on stage to help out his struggling friend.

Shout Factory includes a fine 5.1 DTS-HD MA soundtrack with engaging dynamics and smooth fidelity. The indie production does have small issues with intelligible dialogue, mostly by a mumbling Ben Dickey as Blaze Foley. There’s not a huge amount of discrete surround action in the mix. Rear channels are largely reserved for musical ambience and typical audience response. The front soundstage is well-defined with instrument separation for the songs.

Secondary 2.0 DTS-HD MA audio in stereo offers a less expansive presentation. It’s a suitable stereo mix but only necessary if you can’t enjoy the surround audio. Optional English SDH and Spanish subtitles play in a white font, inside the 2.39:1 aspect ratio.

Some wondered if this indie darling at Sundance would make it out on Blu-ray. Shout Factory distributes Blaze for IFC Films in a tidy release that actually contains a featurette and full director’s commentary. That’s more than one could ever expect these days for this indie passion project by Ethan Hawke about an obscure country songwriter.

First pressings include a slipcover. Reversible sleeve art inside makes for interchangeable covers.

Audio Commentary With Director Ethan Hawke – The star actor has always chosen his film projects with care, and Blaze is clearly near and dear to Hawke’s heart. The director, co-writer, and producer of Blaze gives an enthusiastic, upbeat discussion of his movie’s themes and characters with a keen behind-the-scenes view. He explains how many scenes were filmed and his motivations for many of Blaze’s bigger filmmaking decisions. There are small gaps in silence when Hawke allows a scene to play out.

Behind-The-Scenes Featurette (07:28 in HD) – Ethan Hawke, Ben Dickey, Alia Shawkat and even the real-life Sybil Rosen show up in this enjoyable and compact guide behind the scenes. Shot as the movie was being made, it has clips of Hawke directing scenes and cast members discussing the movie.

The 15 unaltered images below represent the Blu-ray. For an additional 21 Blaze screenshots, early access to all screens (plus the 20,000+ already in our library), 75+ exclusive 4K UHD reviews, and more, support us on Patreon.