Director Peter Berg, who moved from the banality of Battleship into a string of true story adaptations, handles Hollywood’s version of the Boston Marathon bombing. Hollywood it is – ordinary demoted cop Mark Wahlberg singularly involves himself in each of the critical story points. He’s like a blue collar Boston-ite superhero.

Beyond the unnecessary and even exploitative nature of the movie, Patriots Day treads like a disaster film. All the tropes are here. Disaster movies deal in character, sometimes soap opera-y but generous in developing personalities. Patriots Day’s superficial character perfection – victims are drawn as flawless people, understandable given the real world consequences – lends an air of artificiality. It’s a fist-pumping, rah-rah movie for Boston, but also reaching for empathy where much already exists.

At its most energetic, Patriots Day charges forward with the investigation. Kevin Bacon and John Goodman work from a makeshift office, parsing video footage with tense stares. Although presented with the atmosphere of a TV crime drama, the quickened pace similar to Paul Greengrass’ work brings intensity.

No matter the authenticity, this isn’t a film in search of tribute

At its worst, Patriots Day works to oddly empathize with the bombers. Their dry, unremarkable home life insinuates a sense of marvel – how could they? The pair appear ordinary until their violent extremism. Worse still, their screen time outweighs that of victims. If Patriots Day has a story, it’s giving these brutes attention for profit.

The entire sequence of contemporary true life terrorism cinema is bizarre. Oliver Stone did it with immediacy for 9/11, and Berg for the Marathon bombing. It begs a question of who these movies appeal to – the empathetic watcher seeking perspective on tragedy or the angry subset of Americans already on edge? It’s not enough a 24-hour news cycle instills and then insulates fear. Now we pay for the privilege in theaters.

Patriots Day nearly works as a piece of dramatic entertainment. The gesture of this film though never feels less than cutthroat. Bizarre moments of comedy feel crass too. No matter the authenticity (and Patriots Day is flagrant in breaching trust), this isn’t a film in search of tribute. Pre-closing credits, survivors and victims earn the right to speak for the camera. Without action or Wahlberg playing super cop, their words generate better understanding and hope than all of Patriots Day’s two hours. 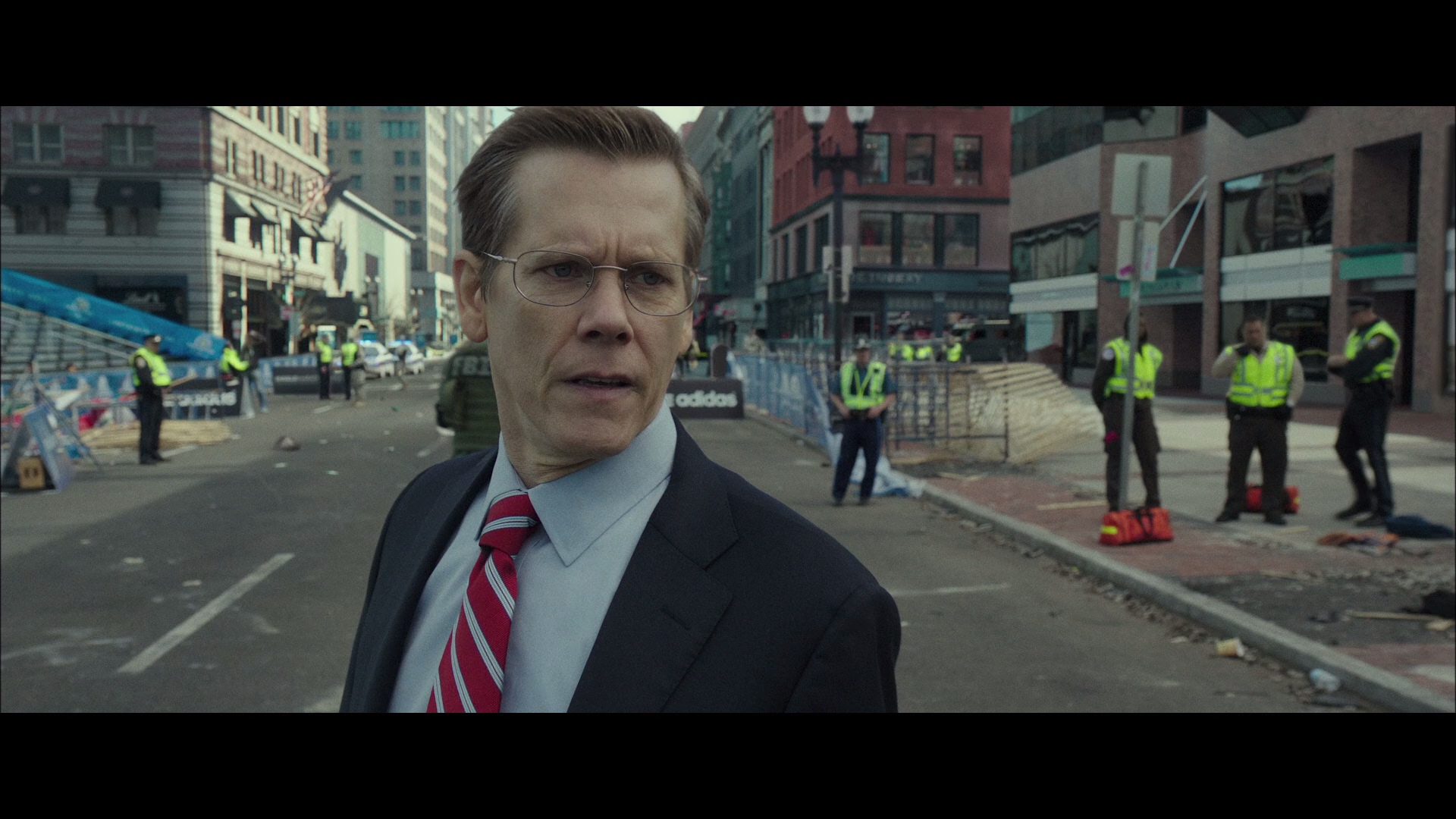 Whatever resolution Patriots Day uses at the source (nothing definitive online; IMDB lists 3.4K, for what that’s worth), it produces sensational images of Boston. Skyline shots pour on the detail, offering not only pure digital clarity but flawless lines and strong HDR effects. The city sparkles in the best way.

Fairly dark for a chunk of its runtime, the UHD claims superiority over the Blu-ray for shadow definition. When the bombers kidnap Dun Meng, the depth established inside his black Mercedes is astounding. The same goes for the opening scene in a dim apartment; Wahlberg’s clothes and face still show texture even as the shadows remain strong.

With a low noise presentation and stellar fidelity, Patriots Day showcases the tech not in raw visual bite, but those subtle improvements. Casual viewers might not pick up on shadow density and retained fine detail, yet those looking for it have a high-end disc. Color still strikes naturally, adding to the marathon scenes. Note Patriots Day does use footage from the events, often in remarkably low quality.

Slightly elevated noise is barely a bother, most evident inside the FBI’s makeshift lab. The gray walls call for it. Otherwise, clean encoding lets the images breathe. Boston looks wonderful, and minimal aliasing creeps into the image.

Both discs offer a stellar DTS:X mix. Beginning with the marathon as crowds surround the event, the track picks up incredible nuance and volume. Helicopters overhead hammer the subwoofer and PA systems flood the speakers. Dynamic range picks up when the bombs explode, shocking in their intensity and power. It’s a frightening moment, elevated by the audio.

Minor ambiance inside the FBI station keeps the mix alive until a powerful, natural police shoot-out gives Patriots Day a reference level sequence. From pipe bombs bursting and their debris raining in every direction to shattered windshields propelling glass through the soundfield, it’s spectacular design. At the boat, assault rifles fire off rounds with increased low-end power as opposed to the handguns prior.

Bonus features make the disc worthwhile, beginning with the three part Boston Strong. A trio of key people involved in the events speak on their experiences, with great production values. The Boston Bond details how the film shoot went in the city, praising the area for its help over 22-minutes.

The Real Patriot carries an awful title for a feature focused on Peter Berg, while The Cast Remembers lets the actors tell where they were as events unfolded. A great idea, Actors Meet their Real-Life Counterparts sits the cast down to chat with the people they play. At 18-minutes, topics keep coming for an interesting series of conversations. Finally, Researching the Day follows the production team as they handle pre-production.

Click on the images below for unaltered, full resolution screen captures taken directly from the Blu-ray. Patreon supporters see our screen shots first, view our entire library in .png format, and gain fast access to 14 Patriots Day  exclusives for as little as $1, perfect for custom cover art, film study, or other applications.