While the premise is right, the execution flounders. Independence Day: Resurgence begs for even an ounce of narrative sense as the overblown and even needless action spreads through the plot hold-riddled story. Pointless cameos, wacky characters, and empty spectacle hang heavily on this sequel. The only positive is in reigniting interest in the first gleefully goofy Independence Day.

This sequel looks… fine. Fox’s UHD presentation isn’t much of a dazzler. Side-by-side with the Blu-ray, Independence Day: Resurgence looks fairly close to the 1080p offering. The big sights of destruction barely rise above the HD edition, the native 2K source not allowing much in the way of added fidelity. The upscale is decent, just not enthralling.

A layer of HDR effects connect in giving life to the lasers and explosions. Interiors, with blinking lights and other indicators, carry sizzle. Routine black levels add some depth, although the slightly darker presentation overall costs this disc contrast. In the third act, scenes of William Fichtner underground in the bunker seem overcast.

Predominant blues sap some of the color potential, but there’s still life here. Exteriors nicely pull in primaries as needed, and certainty the fireballs leave behind memorable oranges. The entire collapsing London sequence is lively. An artificial grain structure is managed by the encode. This isn’t an awful UHD, just one that feels distant on this format.

Grain incoming. Artificial grain, anyway. Although shot digitally, a layer of added grit hangs over the images. It looks fine and Fox’s encode is more than stout enough to deal. Behind the grain sits a bright, clean film with plentiful fidelity. Although a touch inconsistent with cinematography, most shots produce excellent facial definition.

By the time visual effects take over, it’s a stunner. All of the super high-res destruction and alien spaceships make for ample, rich sequences. Independence Day draws from its locker of tricks and the results build spectacular scale. Any misgivings of the live action dissipate pretty quickly. Even at the start, when on the moon base, the hyper detailed cannon array shows off intricate touches.

Major effects pull Independence Day away from the rush of the blues. Fire ignites and saturation follows. Some rich skylines back the action. Bunches of green lasers pan across the screen with plenty of color intensity. Otherwise, the underground bases and moon locations drift toward a bland blue, not all that attractive but still rich in texture.

No worries from black levels, instantly established by the space scenery on the moon. As the aliens roll overhead and sunlight disappears, the shadows take hold. A handful of shots at sea as a mothership hangs overhead generate awesome dimension from the glow of a laser and surrounding blackout. 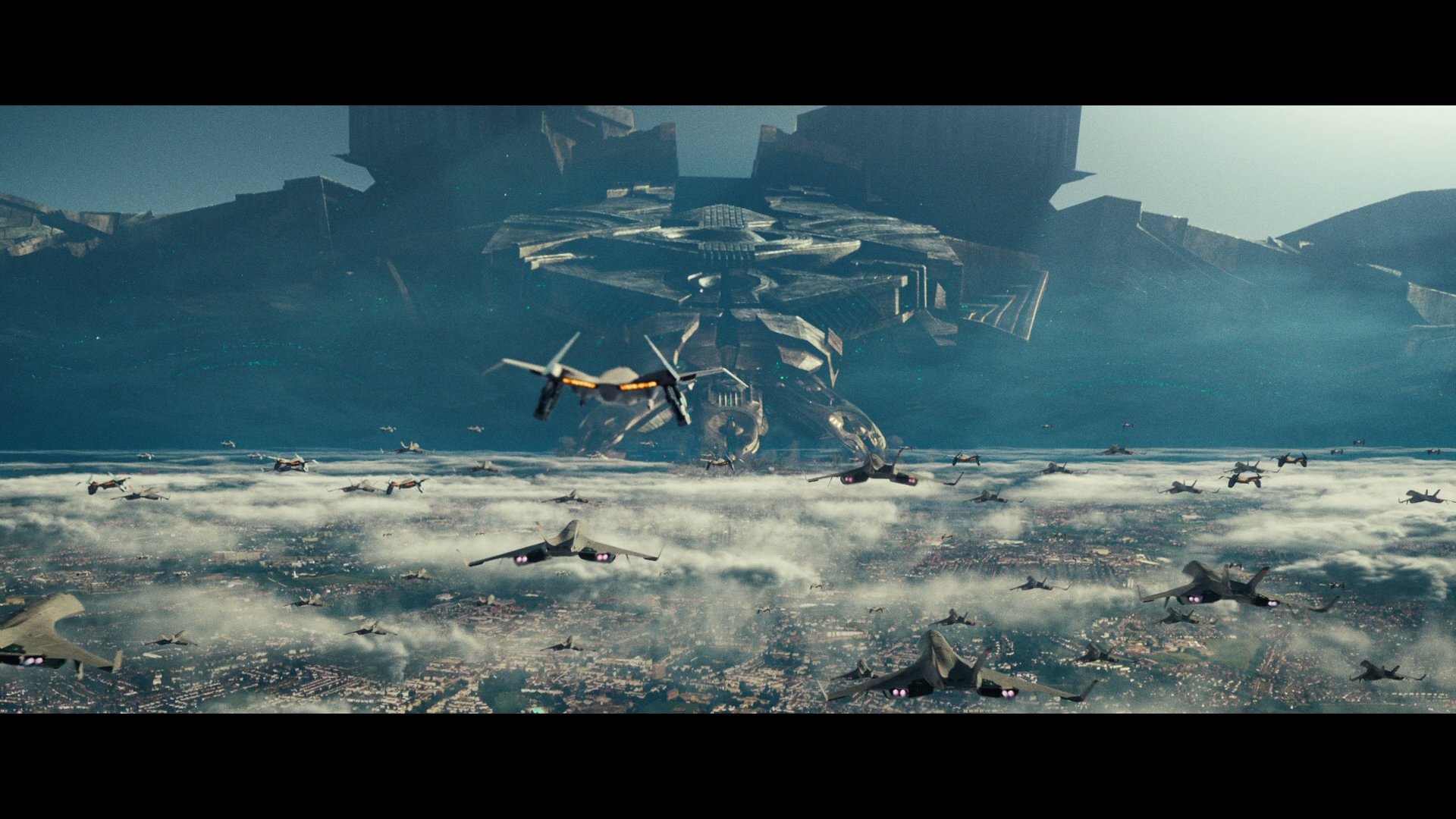 In 20 years between the original and now, there’s a surprising audio consistency. In DTS-HD 7.1 (Atmos on the UHD), the additional speakers extend the space, although surrounds fail in being pronounced. They accentuate. At their best, when Liam Hemsworth flies a ship through a debris field and things clank on the hull, it’s loud. Otherwise, they generally service pans and lasers. In the midst of entire cities lifted from the ground, debris fields stay evened out. The lack of aggression is odd, although Independence Day: Resurgence does offer accuracy.

The winning point goes to LFE, scaling up the planet-sized alien ships as they roll overhead. Weight is added to their approach. Explosions hit with force, and when a city comes tumbling down, the impact sends the sub into overdrive. A sizable finale needs similar girth. Footsteps from a mammoth alien stomp about, while laser strikes leave a mark. To its credit, surrounds pick up too as the ships form a whirlwind of sorts.

For a dull box office result, Fox still produces a decent Blu-ray for Independence Day: Resurgence. Roland Emmerich’s commentary comes first, and continues to spread over nine deleted scenes, some of which clarify plot developments. A gag reel reveals why Jeff Goldblum needs to be certified as a national treasure. The big making of titled Another Day splits into four parts, running just short of an hour. While glossy, the information is strong. Two pre-release in-character bonuses come next, one a news report following the fiction’s history, the second a comical public access show with Judd Hirsch. A concept art gallery comes last.

A total dud from beginning to end, Independence Day: Resurgence has the right premise for a sequel, but not the logical execution.