Independence Day: Resurgence is hollow and no, expectations shouldn’t be different. This is director Roland Emmerich who delights in breaking things at unimaginable scale. His gimmick has, unfortunately, trapped him in a place where visual effects migrate onto the screen, whether attached to any story or not. It’s doubtful Independence Day: Resurgence features scenes free from digital assistance – a testament to special effects only because special effects are limitless.

With some fairness, the Independence Day mystique has subsided. Aliens blew up New York and they blew up the White House. Anything left is difficult to one-up, so Resurgence’s concept is to hodgepodge a litany of battles until the runtime can house no more. Few films have existed with such a dire numbing effect in their spectacle. Independence Day: Resurgence’s methods are to present moronic plot details – usually with David Levinson (Jeff Goldblum) speaking for the audience – which set up digitized pyrotechnics. 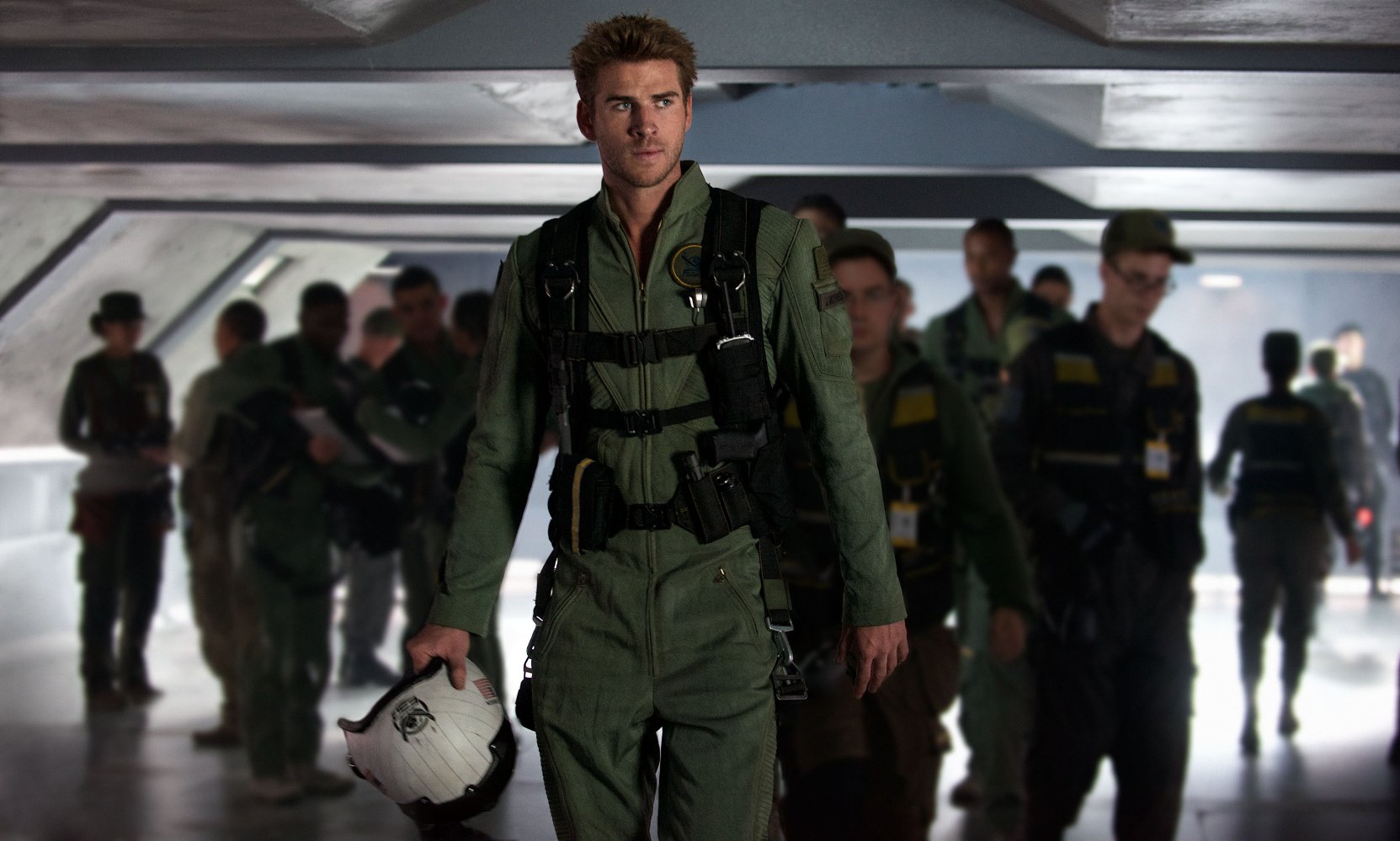 Mighty difficult to follow or even comprehend, Emmerich’s putrid sequel lacks both coherency and consistency – and this with five people credited to the screenplay. Twenty years since the Independence Day war, Earth has expanded technologically. It’s aesthetically an unwelcoming planet, resembling a high-tech prison, even if the narrative insists this fusion of alien tech bettered the world. Although military forces have laser guns and super cool moon bases, standard school buses still run on gas while destruction scenes show contemporary 747s being lifted into the air. Even in futuristic fiction, airlines still try to save a buck at the expense of their passenger’s comfort.

Limited story exposition offered by Independence Day: Resurgence either expels or includes those actors from the 1996 original. Goldblum’s back. Bill Pullman still gives speeches. Brent Spiner’s comic relief returns, to an extreme. Out though is Will Smith and lost is the charismatic center who held the colorful script together. New faces Liam Hemsworth and Jesse Usher combined cannot match Smith’s presence.

The movie feels hopelessly depressed as it slings effects-led action scenes one after another.

Where the first film demanded color, Independence Day: Resurgence’s mopey blues lack pizazz and energy. Popcorn value tapers off from the sullen feel. Once past the destruction, it’s a relentless series of aerial battles which all look, feel, and are familiar. A number of high-profile movies are aped for their material – Terminator, Starship Troopers, Godzilla, even Emmerich’s own 2012. 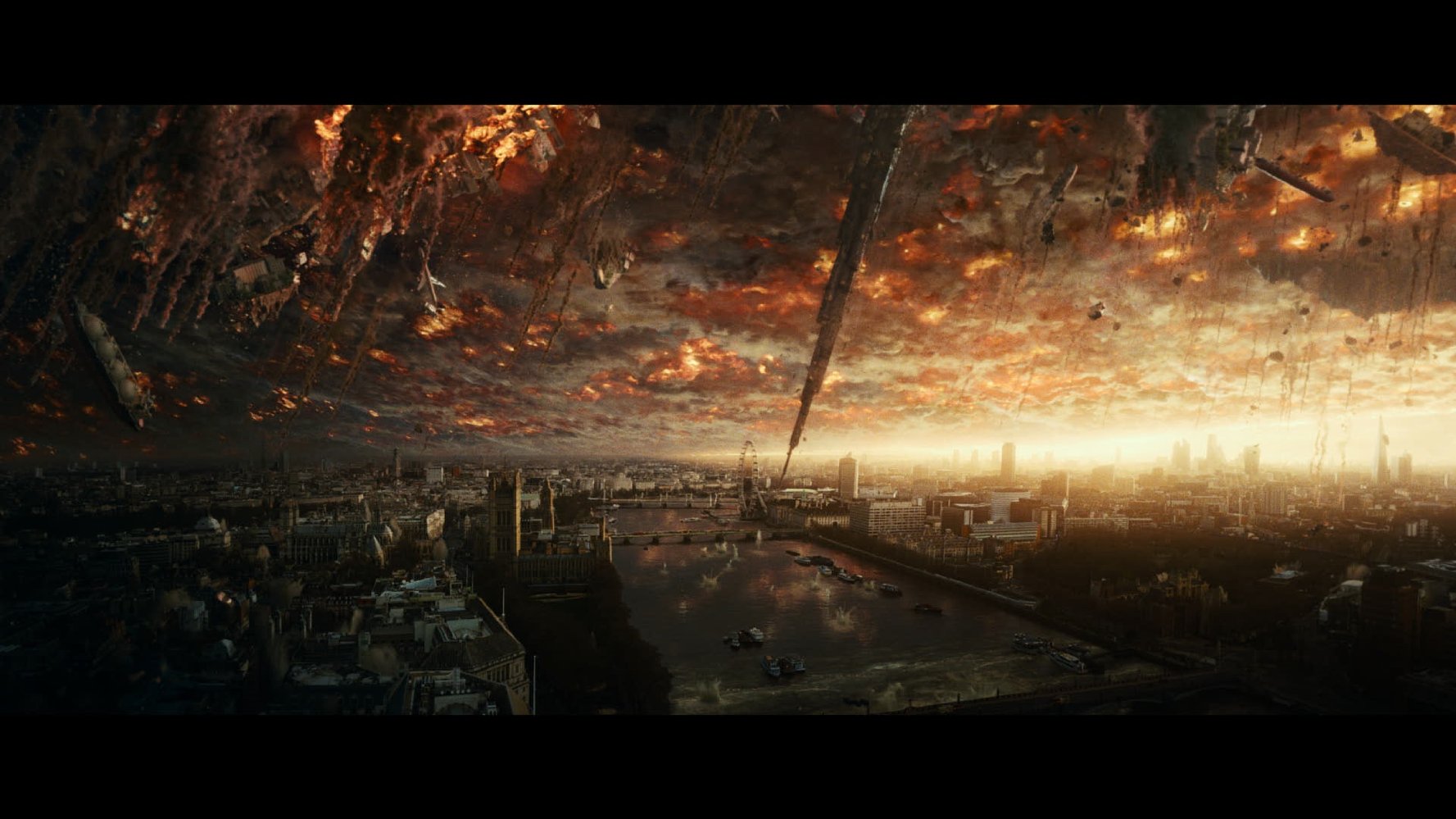 Stranger still is an identity crisis. After 100 minutes of tiresome noise and fire, Independence Day: Resurgence plants a giant alien in the middle of an empty desert instead of a major city. Worse, the big bugger chases Jeff Golblum, who’s involved only by contrivance. His character only watches and commentates, his story arc completed before the film finishes.

Popcorn films are depreciating, no longer dumb so much as imbecilic. After 2015’s atrocious Terminator: Genisys, Resurgence institutes a new low. Blame anything goes special effects, blame falling audience attention spans, blame studio executives; none of those matter. Independence Day: Resurgence, with preceding duds and those that follow, are sapping the vividness of a peculiar, always excessive American artistic export.

Whether obtuse or not, iconic post-Star Wars popcorn cinema used character archetypes and framed them in situations necessitating their action surplus. That’s not happening any longer – visual effects come first, and if characters happen to exist on the underside, so be it. Escapism died. Independence Day: Resurgence was the death blow.

There’s dumb and there’s Independence Day: Resurgence, a film so loud, it’s hoping no one will notice the lack of coherency.