Deadpool has a ton of vulgar fun on its way through superhero cinema tropes. Ryan Reynolds clearly enjoys himself as the raucous, disfigured anti-hero. Maybe it’s too smart – Deadpool riffs on the studio system as much as it requires Fox’s backing. Dramatic moments sputter out too, but everything else soars. Take Deadpool as a breather from the cluster of other Marvel offerings.

Read our full theatrical review of Deadpool for more.

Finished at 4K, Deadpool offers the visual goods. Texture on Deadpool’s suit is great, with every little bead, patch of leather, and stitch visible. Reynolds’ make-up holds up under such scrutiny, and if anything, impresses more so. The leathery texture there is gruesome too. Inconsistently, a slightly washed, glossy look passes over the images. That leaves the look slightly processed and flat. It’s a mixture of natural clarity and digital glassiness.

It’s a high contrast outing, oozing dimension and clarity. A pass of HDR lacks defined pop, but does manage to enhance overall depth. Black levels greatly outperform the Blu-ray (watch the animated creatures pass into the shadows after DP is knifed in the skull) in definition and tightness. Bright skylines keep imagery dense, with focused lighting applied with care.

A cooler color palette brings down saturation slightly, but no the vibrancy of Deadpool’s suit. That red sizzles. Primaries light up once inside the apartment set with plenty of decor. A strip club’s hazy lighting provides colorful energy too.

Shot on a mixture of film and digital – seemingly without consistency – Fox’s Blu-ray jumps between formats. Visible grain hovers over the images with the encode showing little sign of struggle. Replication of this stock is clean without added artifacts.

Come digital time, the change can be imperceptible. While the grain is whisked away and images carry themselves without noise, Deapool loses none of its fidelity. At the center is Deadpool’s thickly textured suit. From the chest strap and leather to the digitally-enhanced mouth area (behind-the-scenes photos and promos show holes in the region), each nuance of the costume can be seen. Make-up for Reynolds’ scarred face holds under the scrutiny of Blu-ray too.

While rather boring in terms of color palette, an aggressive contrast boosts each shot. A veil of blue-ish hues does take some zip from the higher end, however slight. Tremendous black levels begin their work immediately from the opening credits. Traveling through a car paused mid-flip creates plenty of shadows. Their quality isn’t lost. 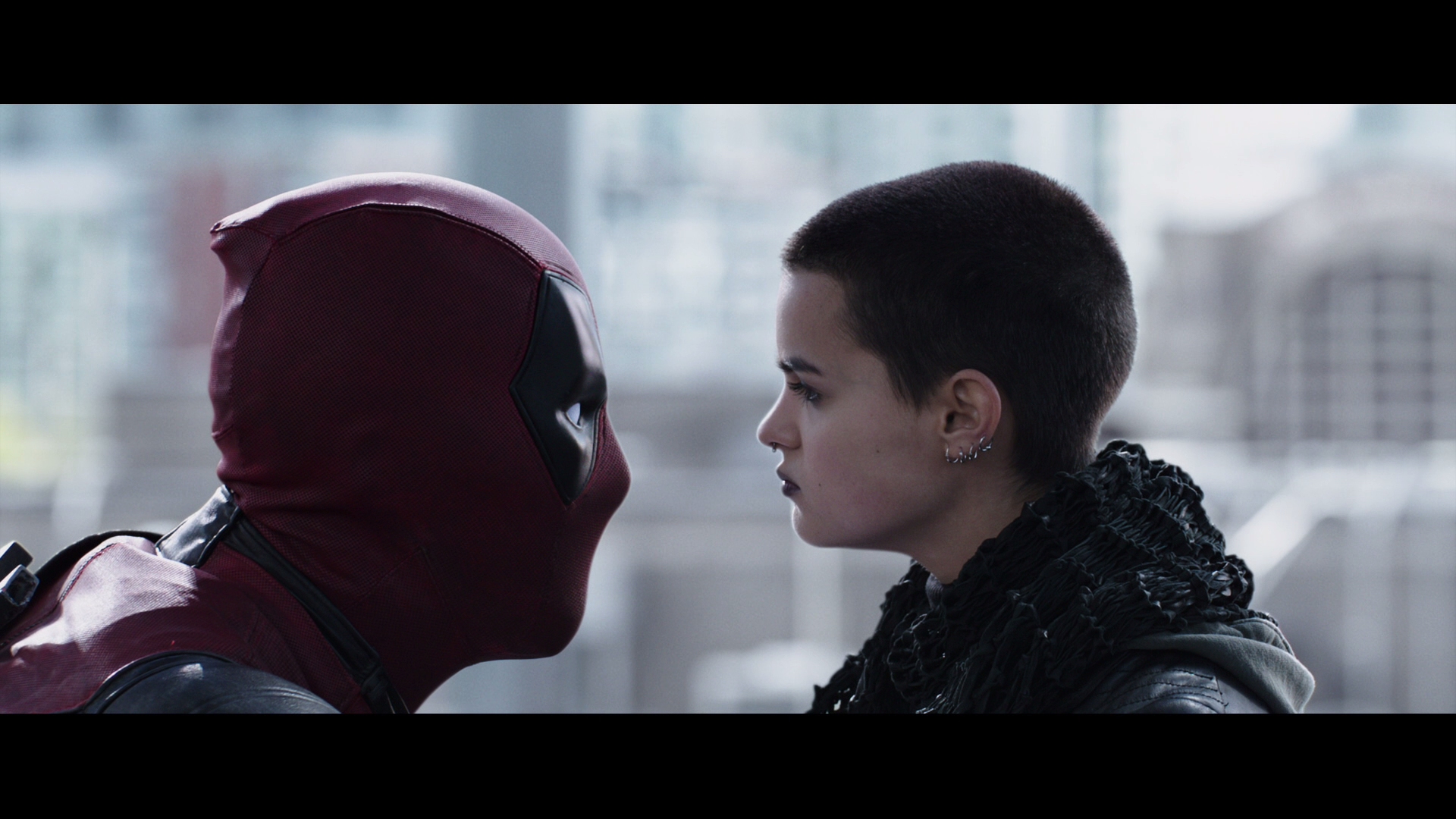 On the attack from the outset, Deadpool’s LFE output creates a booming soundstage. Each punch or kick creates tremendous thrust on impact – maybe too much considering. Gunfire feels weak comparatively. By the third act, a swell of explosions and the ship collapse perk the mix up. Visual and aural scale are set by the thundering subwoofer support.

Note that on Blu-ray, Fox avoids the Dolby Atmos mix heard in theaters. DTS-HD 7.1 will have to suffice, while UHD buyers receive the Atmos track. Surrounds lack presence, only catching in the third act. While a skate park has brief side-to-side motion in a halfpipe and an alleyway grants this disc the best rain effects, action sounds diminished. Gunfire tracking limits itself, with bullets situating in the fronts. Motion lacks the energy of other superhero flicks.

Those needing a boost of positivity can skip to the climax. Falling debris creates an exceptional soundfield while the brawl between Colossus and Angel Dust sends the pairing between channels with each punch. And here, that contact thump from the LFE is sensible.

From Comics to Screen… to Screen peers into the Deadpool-verse, spending 80-minutes across five parts to tell the story. The character’s origins, first screen adaptation, and Reynolds’ eagerness for the project are covered, then segueing into a lengthy making-of. While lacking the production value and appearing rather typical in EPK tone, the feature has depth and detail.

For those who still need more, dual commentaries come into play, one with writers Rhett Reese and Paul Wernick, joined by Ryan Reynolds. The second grabs director Tim Miller and comic writer Rob Liefeld. Miller continues over ten deleted scenes, many of which deserved to be in an extended cut. A ludicrous amount of promo videos all feature Reynolds in character and a photo gallery has some fine images.

Unknown to his mother at the time, Ryan Reynolds’ was born to play Deadpool and a peppy script never loses a chance to pop a joke.