Is Die Fighting a brilliant parody of modern action thrillers or a low-budget, c-grade independent film lacking any awareness of how truly terrible it becomes? Fabien Garcia writes, directs and stars in this ill-conceived martial arts movie, introducing a team of martial artists calling themselves the Z-Team.

Before I completely scare everyone away from Die Fighting, its fight choreography is flashy for independent film and adds a certain je ne sais quoi to its poor acting and scripting. This is a movie that should have been made when VHS was the dominant home video format.

Its unique approach shows an amateurish enthusiasm for filmmaking backed with more money than talent. Die Fighting may even be a fun movie to watch in a group setting. Its unintentionally funny dialogue and poor acting is ripe for friends to trash and laugh at together, while also enjoying the occasionally interesting fight scenes.

The thin premise begins with four martial artists who are looking to break into the big time with a movie in Hollywood. Fabien, Lohan, Didier and Jess call themselves the Z-Team and are drawn into a maniac’s deadly game when Fabien’s girlfriend is kidnapped.

The maniac is a mysterious director that forces the friends to compete in his “reality” film, recording them in more and more ludicrous situations as he threatens the girlfriend’s life. The friends are told to commit crimes and take on strangers in staged fights. One of the funnier moments is when Fabien has to take on a group of gangbangers in L.A. by himself. The mysterious director has him re-stage a scene from Bruce Lee’s Enter The Dragon in a dojo against a line-up of black belts.

… the decent fighting and martial arts are the only things that work.

If Die Fighting has one thing going for it, the fight choreography is pretty good for what appears to be a low-budget flick made without a scrap of Hollywood talent. Star Fabien Garcia actually trained in Shaolin and shows good chops in his fight scenes. I am guessing the Frenchman has done some stunt work before in the business. I bet he’s been a body-double at some point with his acrobatic moves. His physical talents are not in question but it’s obvious why he hasn’t broken through in roles. He simply lacks the charisma and command of English needed to be an action star in movies. Fabien is also not the most imposing man on screen. He’s closer to the lithe kung fu fighter mold than the ripped giants favored in today’s action films.

If you can ignore the broken English by most of its leading stars, the terrible acting, and ridiculous scripting, Die Fighting has some energetic fight scenes that riff off several famous movies. From movies like Enter the Dragon to Fight Club, the decent fighting and martial arts are the only things that work. This is obviously amateur filmmaking but its heart is in the right place. Maybe Fabien Garcia’s second film will be a masterpiece, who knows? If you enjoy kinetic martial arts, there is a slim chance you may actually like and remember Die Fighting as anything but a disposable action thriller. 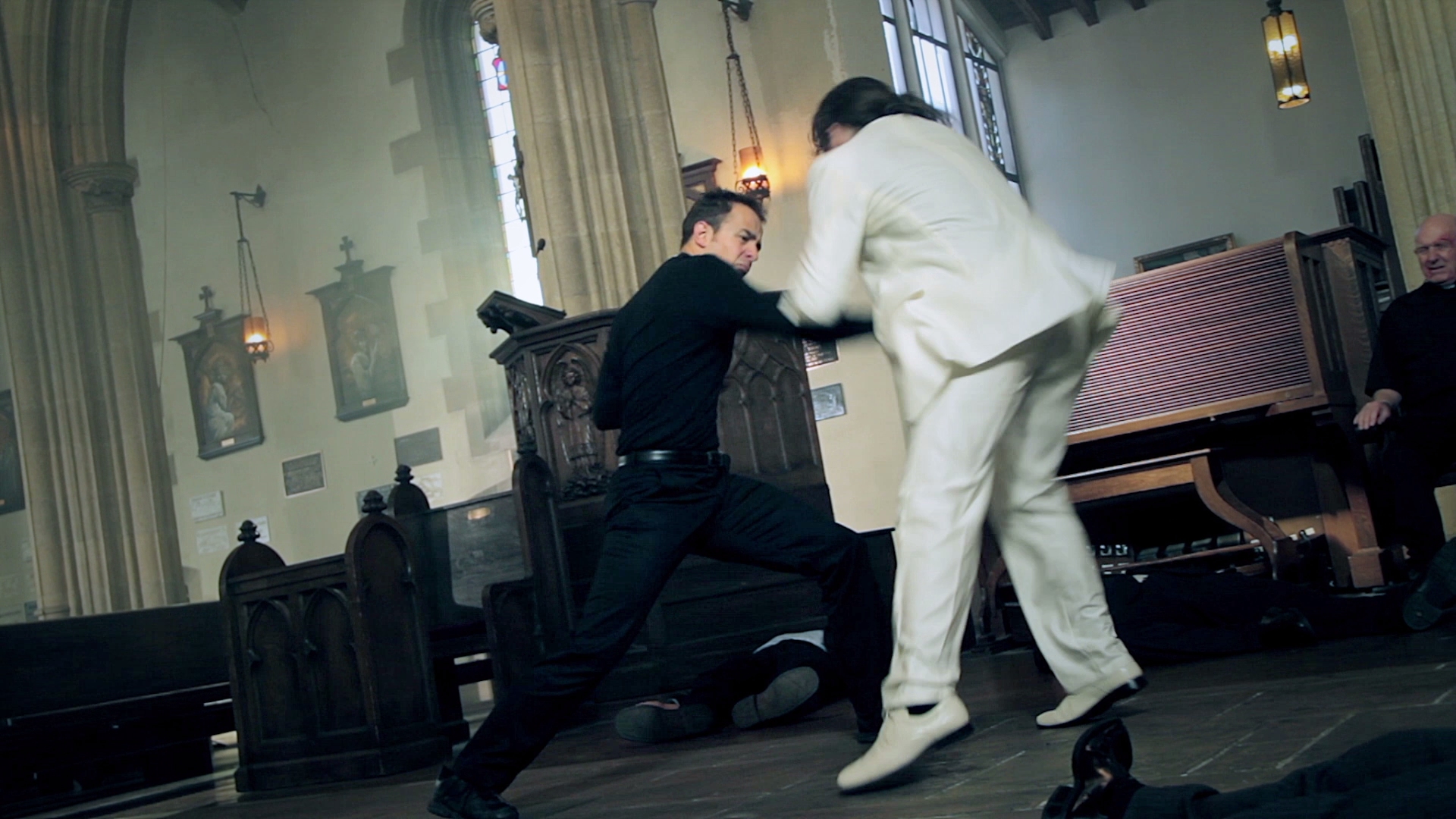 MVD Visual is the distributor for Die Fighting, offering a solid but ordinary Hi-Def presentation. This is not polished cinematography but bright digital video that was common a few years ago in independent film. The 2014 movie runs 90 minutes on a BD-25, encoded in AVC video that shows some banding and compression noise. It is shown at a 1.78:1 aspect ratio.

The older digital video has strong clarity. The mostly flawless video has an over-driven contrast with expected detail. This is newish video footage that doesn’t resemble the warmer saturation or tonality of film. Black levels are fairly average but don’t noticeably crush shadow delineation.

Die Fighting includes two separate options that present a tough choice. A lossy 5.1 Dolby Digital soundtrack at 640 kbps and 2.0 PCM are the two choices. The surround mix is loud and aggressive, constantly attacking the listener. It’s like many action soundtracks but on steroids.

The higher fidelity stereo mix loses a big part of the soundstage but some may prefer its tighter staging. The sound design emphasizes a lot of kicking and hitting, occasionally going overboard in its attack. This is not sophisticated audio design but generic fighting sounds heard in a thousand other bad movies.

There are no included subtitles.

Die Fighting is coded for all regions.

Behind the Scenes (15:22 in HD) – Broken up into a series of different segments, training footage and on-set material has been included. Fabien Garcia goes into the genesis of the movie and how he meet Laurent Buson, his co-star and the movie’s producer. Their story is actually interesting in that they were two Frenchman that first met training in Shaolin, China.

Theme Song (05:25 in HD) – Two songs from the soundtrack play as stills and clips from the movie play.

A ludicrous martial arts “thriller” with okay action and terrible acting. You’ll know ten minutes in if you should continue watching.