An authentic take on a career criminal

Much in the spirit of 1967’s Bonnie and Clyde, John Milius’s Dillinger paints a credible picture of the Depression-era gangster and notorious criminal during his heyday. Dillinger is a bloody movie that chronicles the saga of John Dillinger and his gang of bank robbers that struck fear in the Midwest during the 1930s. Pulling two regular Peckinpah actors in Warren Oates and Ben Johnson as the opposing leads lends an air of authenticity that may have been lacking with bigger stars. The crime drama is somewhat choppy in its narrative, sticking to the known facts as much as possible when not engaged in bloody shootouts.

Warren Oates plays the legendary bank robber at the height of his fame. He’s a solid choice that works out quite well in the part. John Dillinger is a man who believes in his reputation and thinks of himself as a top criminal. Back in the 1930s he would have been as famous as any national celebrity, as he robbed banks and was relentlessly hunted by the FBI across the country. John Milius portrays the infamous bank robber as a larger than life figure.

Dillinger follows one track of the gangster’s criminal career while also covering in parallel the man pursuing him, FBI agent Melvin Purvis (Ben Johnson). Most of the action revolves around the chase and conflict between those two men over the years as the bodies mount up. For audiences in 1973, most would have been fairly familiar with Dillinger’s story and his infamous death. Writer and director John Milius takes few liberties with the facts in Dillinger’s case, turning his gangster tale almost into a docudrama if not for the surprisingly bloody action. That doesn’t leave many surprises in this straightforward recounting.

This is hard-boiled drama where the audience is expected to have some foreknowledge of John Dillinger’s criminal career.

The fine cast includes future Dallas star Steve Kanaly as ‘Pretty Boy’ Floyd; Richard Dreyfuss as ‘Baby Face’ Nelson; Geoffrey Lewis as Harry Pierpont; Cloris Leachman; Michelle Phillips of the Mamas and the Papas in her first role as Billy Frechette; and Harry Dean Stanton as Homer Van Meter. It’s a deep cast and Michelle Phillips impresses for a singer in her first acting role as John Dillinger’s lover. Dreyfuss probably turns in the most memorable performance of the supporting cast in a small but notable role.

Dillinger succeeds due to steady performances by Warren Oates and Ben Johnson, a great attention for period detail, and some superb gangster action. Expect some of the bloodiest shootouts ever staged for these Depression-era figures, foreshadowing The Untouchables. The crime drama does lack a bit in character development and the first act feels like a remnant leftover from a much longer script. This is hard-boiled drama where the audience is expected to have some foreknowledge of John Dillinger’s criminal career. That worked better in 1973 than it does today. Fans of violent gangster flicks and a yearning to revisit the Depression’s wave of notorious bank robbers should see Dillinger. 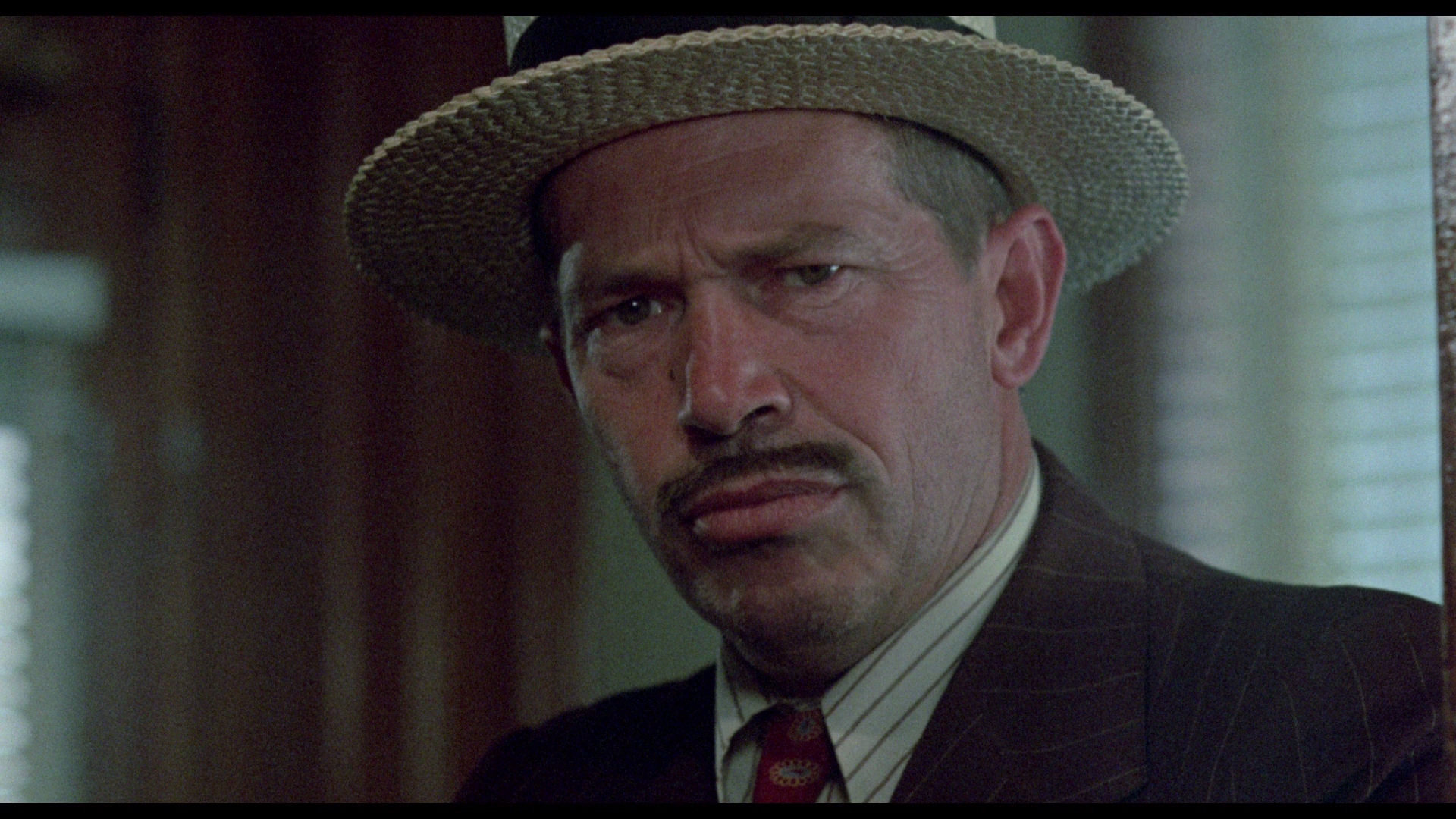 Arrow Video’s Dillinger is sourced from merely adequate film elements in ordinary shape. The AIP movie was first released in 1973 and Arrow has struck a new film transfer for it. The raw 2K film scan turns out okay but hints of over processing possibly creep into the video, including minor halos. Something seems a bit off in its color timing as well, indicating some fading in the elements. I don’t know if the original film elements had exposure problems or not. The color palette is occasionally washed out.

The 107-minute main feature receives an impressive AVC video encode averaging nearly 35 Mbps on a BD-50. It displays at the intended 1.85:1 aspect ratio. The grain structure is a bit messy, possibly reflecting the surviving elements. Dillinger is a soft film with somewhat mushy texture. Some fine detail is evident, though not the kind of three-dimensional resolution we’ve seen from the best transfers of vintage stock. There may be serious limitations in Dillinger’s over exposed cinematography that couldn’t be corrected.

This is a serviceable presentation for the 1973 movie but results indicate a new transfer that hasn’t received serious restoration efforts. Arrow Video has delivered better results with worse film elements before.

The original mono soundtrack is heard in fine, if tinny, 1.0 PCM audio. The low-budget nature of this production does come through in the muffled sound design, generally lacking much punch in the fiery shootouts and bloody deaths. The intelligible dialogue is easily heard in fine clarity and Barry De Vorzon’s score has a nice presentation. This mono soundtrack gets the job done but won’t impress jaded home theater owners.

Optional English SDH subtitles display in a white font. An alternate sounds-and-music only soundtrack is included. This is literally everything audible in the movie except the spoken dialogue. It’s not quite the same as an isolated score but I guess some will find it interesting.

Audio commentary by Stephen Prince, author of Savage Cinema and Screening Violence – This is an academic, analytical commentary of the film. It critiques much of what is happening from several perspectives.

Click on the images below for full resolution screen captures taken directly from the Blu-ray. Images have not been altered in any way during the process.
Share Pin Tweet Reddit
Tags •arrow videoAVCben johnsonBlu-RayPCMRichard Dreyfusswarren oates