What’s John Belushi’s intro in Animal House? Taking a leak on the front lawn of the Delta House, and subsequently on Kent Dorfman (Stephen Furst) and Larry Kroger’s (Tom Hulce) shoes. Were that the worst offense of the Delta fraternity back in the kind-spirited year of 1962, we wouldn’t be discussing it.

So vile, so crude, so glaringly racist, and so utterly loveable, director John Landis states he actually had to cut some ideas from Animal House, an amalgamation of college experiences across the Lampoon. The stuff they trimmed no one would have believed.

It’s hard to say what’s left, the Delta house as rambunctious and uncaring as any before it, and after really. This is the magnum opus of college films, forever solidifying “Louie, Louie” as its own, and turning Otis Day and the Knights rendition of “Shout!” into cinematic gold. Did you know that’s an Isley Brothers song? Nah, it’s always been from, “Otis, my man!”

Animal House did it all, changing pop culture and making toga parties the only college tradition (aside from boozing) that remains in use today. Food fights are a must, but only if you blurt it out first, and every fraternity on campus should fear for the call of Double Secret Probation.

There’s an incalculable energy running through the film, a cast of soon-to-be stars, then current stars, and leading it all is Belushi. Even after they take his bar, the whole f****** bar mind you, he delivers a irreverent speech that’s only marginally less ridiculous than the Bill Pullman clunker from Independence Day. The difference is that it works here, and when you can jazz up an audience into believing the Germans bombed Pearl Harbor, you’re rolling.

For dipping so low and bathing in it, Animal House is a special piece, finding itself stuck with little narrative direction or purpose. It exists to show college, or at least the part that no campus on Earth wants you to see. Everything is leading to the all-or-nothing conclusion where bullets hit a bottle of seltzer water but not the panicked citizens behind it, and a clerk keeps a straight face as Dorfman asks for 10,000 marbles… please. There’s little doubt this is one of the funniest movies of all time, hitting during a cycle of late ’70s, early ’80s gems that simply kept on rolling. Animal House is the icing on top of it all. 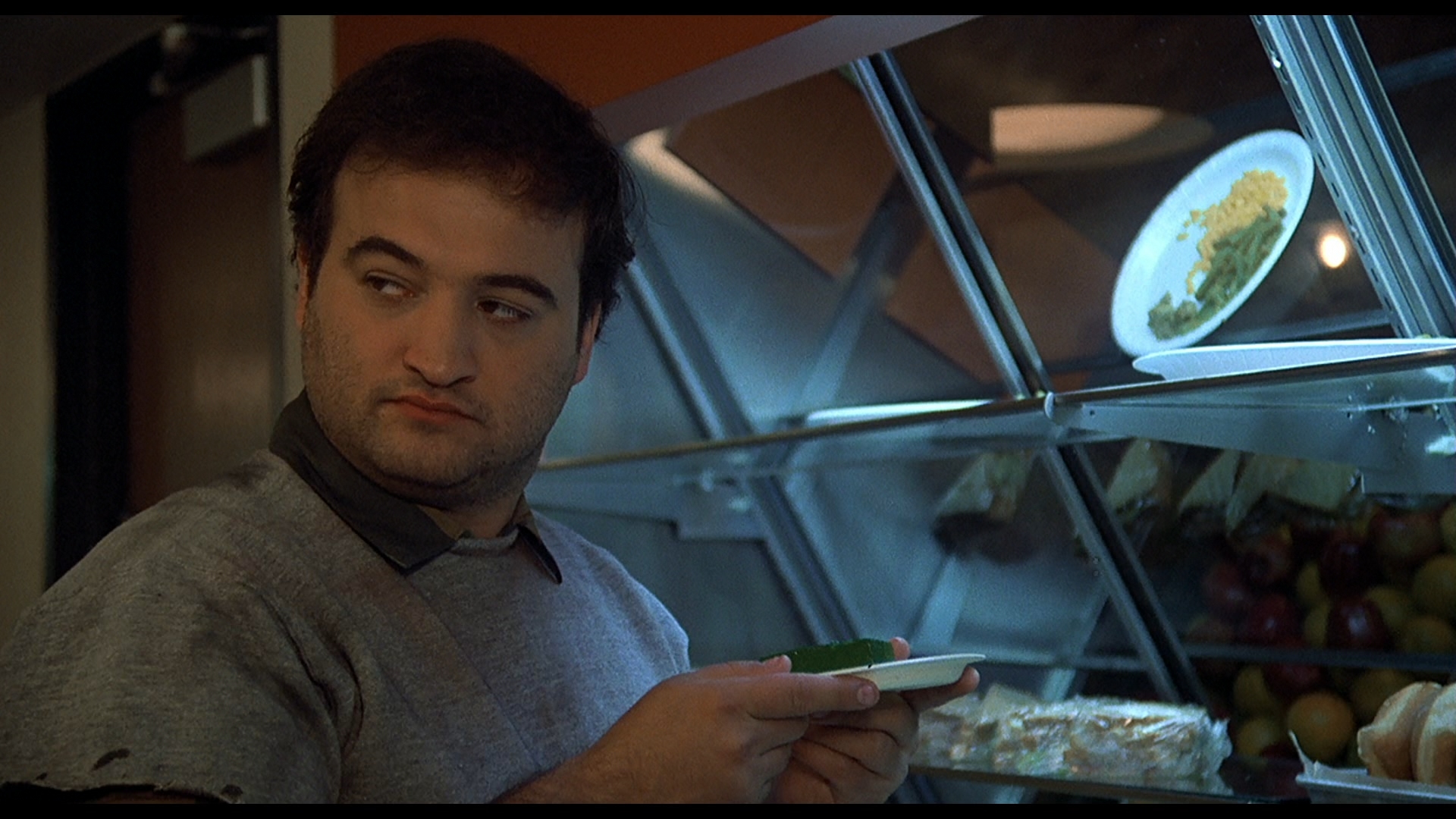 Universal let Animal House loose on HD DVD, not giving it the best of the best in terms of modern restorative work, but it was left to its own devices. Shocking no one, Universal caters to the lowest common denominator on Blu-ray, sharpening it up to make room for the softening produced by the grain reduction.

Animal House isn’t completely wiped clean, the miserable VC-1 encode ensuring to botch a couple of grain spikes in a way only Universal can. What minimalist grain remains on this digital presentation is mud, static and unappealing compared to the way film stock should (and certainly can) look. Certainly though, the studio was simply more concerned with keeping the evils of grain away from the human eye, layering this classic with visible noise reduction rendering medium shots almost unintelligible. Whatever benefit was gained from the resolution increase of Blu-ray was wiped away.

When you do that of course, the image becomes glaringly soft, so what’s left to do other than sharpen it? It creates a battleground, the grain confused as to whether or not it’s supposed to stand out like that, and the halos that surround these memorable characters knowing they’re in the wrong. They stick around because they’re told to, and they’re mocking true fans of preserving actual film.

Think Universal was done there? Ha! You’re funny. It’s time for contrast boosting, that somewhat flat looking HD DVD totally unacceptable even if that’s how it was captured. Why not boost the black levels? That will hide the edge enhancement too, a brilliant plan for Universal who remains naïve enough this late in the game that people won’t notice. Colors are definitely lifted, probably the closest thing to a true restorative process they did. Don’t worry, they botched that too, sending some of the primaries off into space and raising the flesh tones enough that they wander into tinges of orange. How joyful.

So, is there anything left of Animal House? A little. Maybe a handful of scenes are not completely destroyed, a number of close-ups you can count on one hand produce fine detail not evident on the DVD. That’s certainly not saying much. The bigger question is, since they were willing to demolish American Graffiti, should it come as a surprise to anyone that Universal hammered Animal House too?

Switching back and forth between the compressed Dolby Digital of the HD DVD and the DTS-HD track provided on the Blu-ray… well, there’s not much to talk about. The two sound practically identical, the DTS-HD afforded what sounds like a nominal split in the stereo channels, the live concert with Otis Day during the toga party as strong as that will get.

There are brief flashes of surround use too during the invasion of the parade. Music swells slightly and finds the time to sneak back there, and just a hint of the panicked crowd will swirl about.

But, Animal House isn’t a movie for some glamorous 5.1 mix. Be glad someone didn’t get the okay to pump this one up to “modern” standards. In that case, maybe it should be appreciated that the studio left well enough alone, the dialogue as flat as ever and the music (especially the famed Faber anthem over the credits) muffled. Whatever fidelity uncompressed audio has offered, Animal House has rejected. That, or Universal didn’t want to spend any money in restoring it. It’s anyone’s guess.

Extras, with the exception of a pretty awful remake of “Shout,” are pulled in their entirety from the last DVD edition. The Yearbook: An Animal House Reunion is a great making-of, bringing back numerous key cast members and behind-the-scenes types. It’s a must for any fan of this classic if you didn’t catch it before. Where Are They Now is a mockumentary with the actors going in-character to detail what happened to them after the events of the movie. There are two sections of Animal House Scene-it if you want to test your mettle.

U-Control features are technically new, although the content is the same. Scene Companions are just clips from the above documentaries, and The Music of Animal House creates a playlist of scenes with the specific songs you want. The disc is BD-Live enabled for some finality, although there’s nothing of note in regards to this movie.