It’s a shame George Lucas made Star Wars. No, that’s not a knock against the grand space saga, just a dream of lost potential. Who knows what Lucas would have done post-American Graffiti has Star Wars not popped in there, forever changing his course as a filmmaker and not to a singular one.

Graffiti is an intimate little film, at times more about the cars than the people. It has the touch of Steven Spielberg even though he had nothing to do with it, a coming of age story that resonates in modern times as much as it did back in 1973. Characters have a draw to them, more than just staring in awe at how young Richard Dreyfuss, Harrison Ford, and Ron Howard were. They’re interesting, made more so by the somewhat static camerawork that gives the film a naturalistic vibe, absorbing and believable.

This is the night of their lives, Curt, Steve, John, and Terry cruising their town one final time before their college days begin. Each is unique, some out to prove themselves, others victims of circumstance. They’re wild, a little out of control, and, well, teenagers. American Graffiti is a document of a different era, showing lives at the turn of a decade as adolescence slips away, before the signs of a new war, and tradition as it disappears from the American landscape.

Graffiti doesn’t have its own sound because it doesn’t need one, the backdrop-creating gravely voice of Wolfman Jack piling on the classics defines the era and this film. Song selection isn’t just a matter of sticking with the intended period, it’s precise, timed, and on cue where needed. It adds a vibrancy to the visuals as much as it does the tone, the film never losing its zest and luster.

Each of the characters grows up, changes, and deals with their own issues while remaining intertwined with other. Graffiti is a multifaceted film, bending genre norms, breaking free from general blanket descriptors. It feels difficult to contain, and it should. Lucas and company push this young, then mostly unknown cast to be themselves, giving them a free spirit and free reign around town. Who wouldn’t want to experience that? 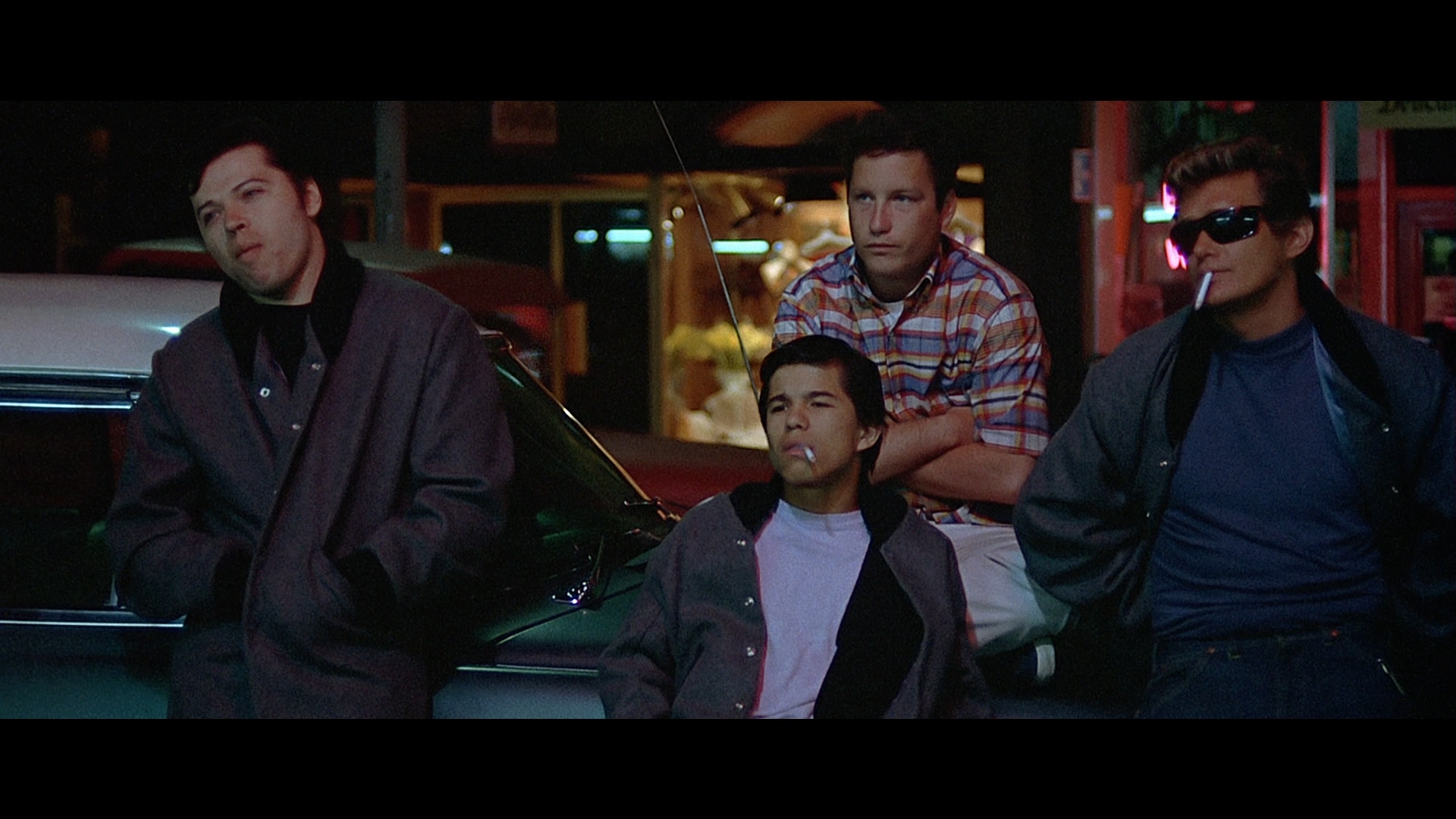 It’s catalog time for Universal, and as usual, the company blows it. No, we’re not on the level of Tremors, proving there may be a god, but he’s not all that merciful if he let Universal sharpen American Graffiti to this level. It’s pretty difficult to completely ruin this one via edge enhancement, mostly because so much of it is at night, at times so dark the environment will take characters with it. Obviously, halos can’t impede in this environment either. Such is the style, and there’s nothing wrong with it.

That doesn’t mean the sharpening doesn’t play a role. Grain is mildly elevated although the VC-1 encode does what it can to keep it free from artifacting. Even a number of grain spikes are handled with caution and care, although without the additional “help,” the spikes likely wouldn’t stand out as much as they do. The transfer struggles to look natural. It may look like film, but film manipulated digitally without much regard to its integrity.

Scenes in the light of the diner or outside storefronts is where Graffiti loses out. Halos, dark, light, you name it, show up en masse. Edges appear harsh and lacking refinement. The image is overly coarse, carrying little to no natural definition, just needlessly processed to the ‘nth degree in spots.

Someone needs to make an offer on some of Universal’s catalog and soon before they botch more classics in hi-def. This might be the final physical media release, and we’re getting stuck with mediocrity, even though it doesn’t need to be that way. The print used here is obviously fantastic, whatever clean-up was performed leaving no residual marks. What it lacks in fine detail is makes up for with a few sequences that appear lightly natural, a glimpse of what this could have been had the studio left well enough alone. Colors are slightly elevated without too much harm, the worst of it being the band donning all red at the school dance. There’s some definite bleeding going on. Black levels remain mostly pure, and the contrast bright (when it can be). It’s all clear past the painful manipulation.

As much as Universal loves to toy with our sensitive videophile emotions, they do right when it comes to audio. Go figure. This DTS-HD 2.0 stereo mix is inoffensive and untampered with, except for a slight balancing problem. There are a few instances where the tunes are cranked up decibels above the dialogue, a slight shock to the system if you’re not ready for it.

Thankfully, fidelity is pure for the era, a little faded and struggling to find range, but clean. Dialogue comes though muffled, seeking better fidelity but never finding it. Songs have a little more room to play, packing a better, crisper punch without the same muddy quality. Regardless, it’s minor, and more than acceptable for something from the early ’70s.

Those worried about some extravagant, out of place stereo effects have nothing to fear. Cars barely separate the fronts, and the romantic interlude gone bad in the forest carries a few owl hoots in the left front. It’s not a wide, expansive sound field, just a slight bump to offer some directionality.

George Lucas chimes in with a visual commentary, various snippets popping up via Universal’s U-Control feature. There’s a separate U-Control track for the music, letting the user make their own playlist from these classic selections. The making of has been around for a while, although it’s still a fantastic 78-minute journey into how the film came together and why. A series of four different screen tests are unique, and actually look great, seemingly shot on 16 mm and preserved well. A trailer and some BD-Live access are here too.