Nobody remembers Baby. You might of just had a “eureka” moment where your inner ’80s child came roaring back, but honestly, it was a memory long since passed over. There are a lot of reasons for it, namely the film’s attempt to ape the E.T. formula once over, only instead of an alien, it’s a cute baby brontosaurus.

Key to the concerns is Baby himself (herself?), an obviously unwieldy mixture of animatronics, a hunched over suit actor, and clay that never convinces anyone it’s skin. The entire movie battles with itself, the parental brontosaurus unit and the kid that’s not fooling anyone. It’s eyes flunk out too, haphazardly constructed and overlarge, cranked out by the in-house Disney team with no specialization.

Baby remains static and sort of soulless, only partially because it’s just a cash-in. Planted under the Touchstone label, Baby is overly violent, a somewhat grim tale borrowing the Disney hallmark of wiping out the parents for an immediate emotional connection. Bambi’s mother may get shot off screen, Baby’s is done in full view, blood spewing from the creature’s neck.

The dinosaurs are surrounded by stock human characters, especially a rogue villain scientist who has a British accent because those are natural evil fits. George (William Katt) and Susan (Sean Young) carry on a disjointed romance, one that’s more or less included to have Baby intrude at inopportune moments. Much of the film feels disjointed, sequences rarely connected, a haphazardly and hastily edited script playing a part. Another were the dinosaur effects, constantly under the stress of the location heat or water, enough to send even the best suit work to an early grave.

If you remember anything about Baby, it comes in the closing moments, Baby captured as momma comes roaring back to deconstruct the impressive village miniatures. The actual African locales add an air of authenticity where the dino suits don’t, and Jerry Goldsmith crafts one of his best works that no one ever heard. There are a few flashes of brilliance after all, although not enough to carry it out of its own decade. 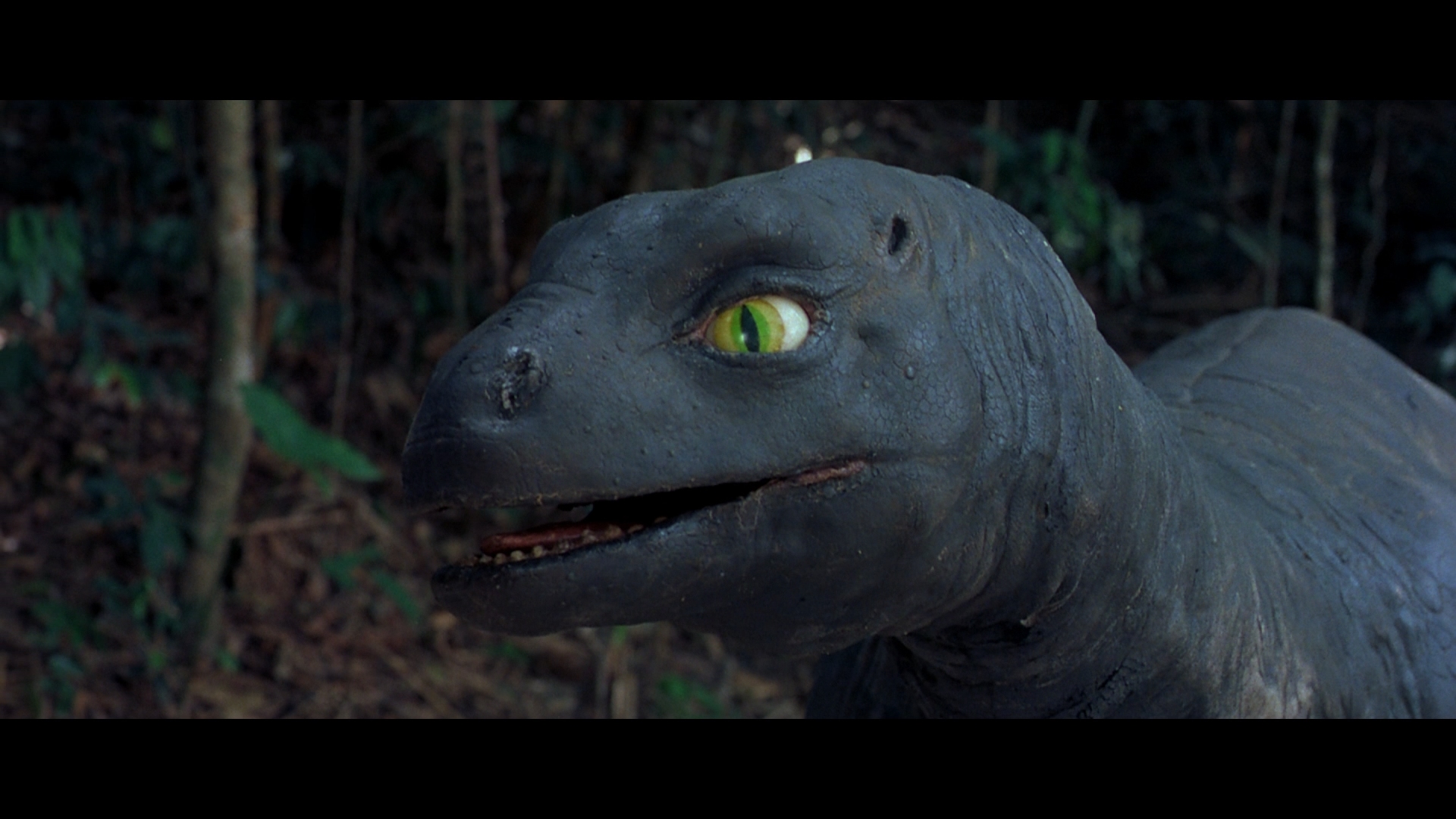 Baby was one of the first films to use Super 35, then called Super Techniscope, a standard for most modern films. On home video, no one seemed to care, worn out VHS copies long since destroyed by time and the DVD release from Disney merely available as a cropped 4×3 print. That means it took lowly Mill Creek to give the film what it deserves at home, viewable on Blu-ray in a true 2.35:1 presentation for the first time since its theatrical run.

Mill Creek deserves a tip o’ the hat too, this AVC encode presenting a clean, well preserved source to work from, hardly a scratch on it even with the multi-pass opticals. On the move to digital, Baby is a little too clean, some of the more striking detail not always visible, and the jungles muddy. All of that plant life is inconsistently rendered, and water takes on a rubbery quality. There’s been some questionable clean-up, the source certainty tampered with lightly.

That’s not to say it’s a disaster, enough texture remaining that the offensive qualities split with the positives about 50/50. Dinosaur suits exhibit precise textures to give them a detailed quality, even if they fail elsewhere. Actors zooms are stable too, high-fidelity facial detail not uncommon.

Baby is bright, the contrast peppy and pure. Black levels take the opposite end of the spectrum and run with it, producing well rounded dimensionality, particularly at night. Colors appear natural to the stock at hand, flesh tones pleasingly left alone while the jungle still brings with it some intense greens. Also, the dinosaurs are a definite blue, more distinct in intensity than previous home video attempts.

For audio, Mill Creek presents a DTS-HD 4.0 track, woefully out of date and poorly over cranked. This is one of those that feels like its cloning the stereos, sound effects exaggerated in the rears and taking over. The fronts never stand a chance against the surround onslaught.

The front/back balance is all over the place, a shoot-out with the military firing off rounds at the father dino at 45:38 pushing gunfire into the left rear where it wails on the eardrums. Goldsmith’s score is centered in the front, never crossing over into the back speakers. Those exist purely for the effects when their presence is needed.

Fidelity is better than expected, the score boisterous and full, dialogue carrying enough crispness to get a pass. Despite the rear-focus, balance is firm too, all of the elements blending at their peak and at a suitable volume.

Nothing here, not even a trailer.