After viewing Ironclad, you can say you have lived. It completes everyone’s life cycle, the usual stuff like birth, high school, and watching a man having his appendages lopped off, then sent into a castle wall on a catapult. Isn’t life grand?

Ironclad’s violence is extraordinary, so vile and relentless it’s near parody. While “shot into a castle wall” may be the cream of the crop, you’ll likely also enjoy, “shoulder severed in two revealing bones.” Ooh, or maybe your style is more, “face bashed in with a mace” or “beaten to death with his own severed arm.” Yeah, that’s a good one.

It’s important to discuss the violence because Ironclad has nothing else to really offer. It’s as mind-numbingly sluggish as they come, that rare movie where if you were watching it in a theater, you’d hope for someone to light up their cell phone. It would act as a brief distraction to take your mind off the dreary monotony.

The movie comes on the heels of a number of direct-to-video medieval slackers (theatrical release in the UK to be fair), although Ironclad has the benefit of an outstanding cast. Paul Giamatti is King John, one of those sadistic rulers who cares only for himself, ruling a post Magna Carta world with little care for his own people. Seeing Giamatti light up the screen in a fit of rage is special, nigh one step from seeing a body doused in hot oil. Not quite, but almost anyway.

King John is infuriated because he can’t get his way, a selection of Knights Templar holding a crucial castle against his multitude of barbaric forces. Think Lord of the Rings and the battle for Mordor, just without all the glitz. Better yet, 300, just without all of the style. Skin either of those movies to their frail bones and you’ve arrived here.

Ironclad slogs through two hours of routine swordplay, marginally memorable performances, and downtime for the sake of downtime. A few more people sent into a castle wall with a catapult and you might have something. 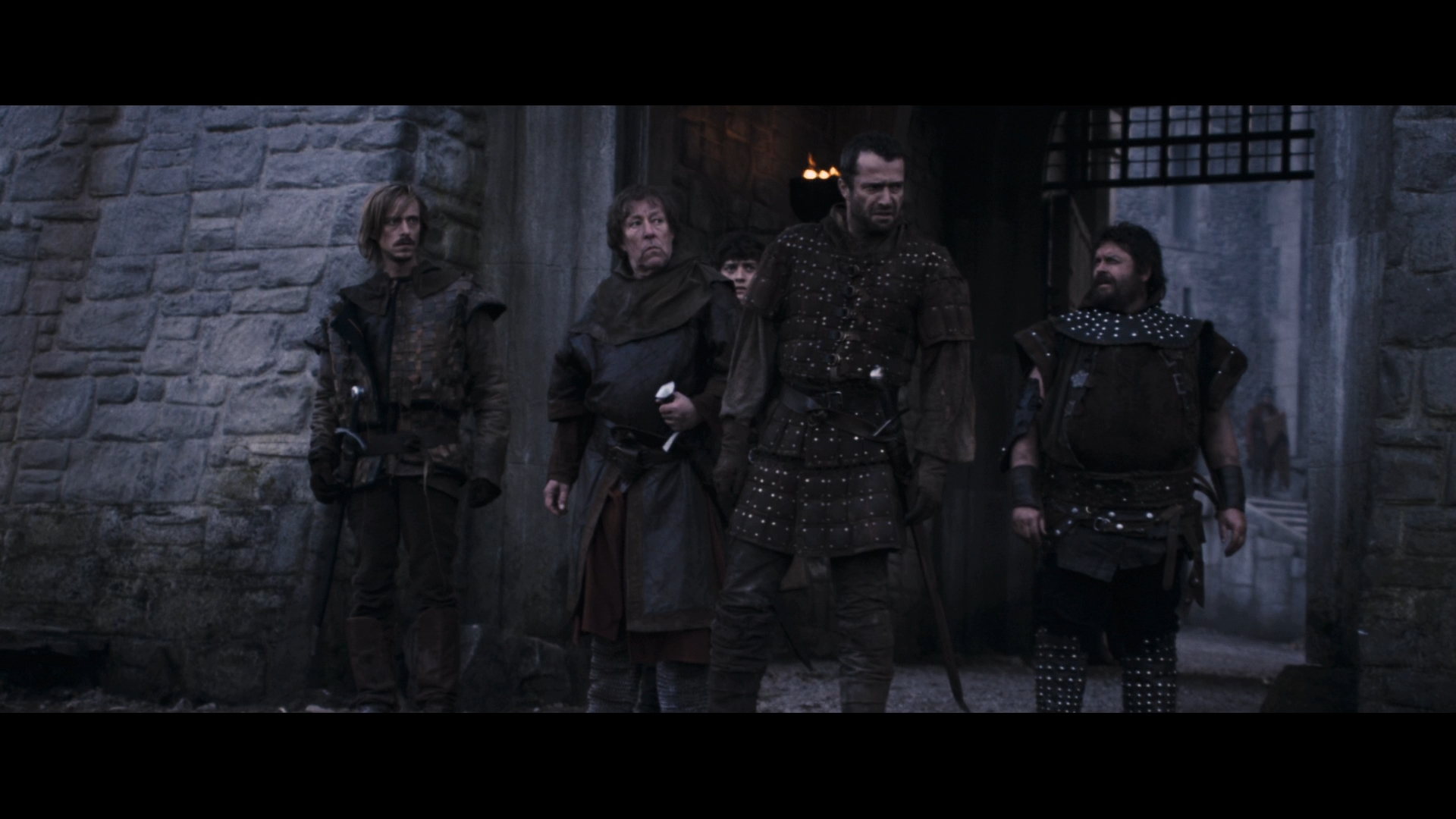 Shot with the Panavision Genesis, it would seem the unbelievable $25 million budget wasn’t spent ensuring a clean image capture. Well, it is clean, noise rarely evident amongst the muted, plain looking frames. Save for smoke where the source material can’t quite handle itself, Ironclad looks remarkable crisp, odd considering the movie wants so desperately to be gritty and coarse. The crystalline appearance of digital doesn’t exactly suit it.

Regardless, it’s what we’re working with. Arc Entertainment supplies Ironclad with an AVC encode, one that results in some rather unappealing banding against some of the skylines. Compression otherwise stays out of the picture (literally and figuratively), leaving the trail of chain mail and blood to cherish its chance to shine in hi-def. Blood is the closest this one comes to honoring saturation, bright red and impossible to miss against the dreary, subdued, and honestly tired palette. These earthy hues have been done to death within the same genre, adding no mood nor credibility to the piece.

For all of those minor missteps, they’re conquerable. The black levels? Not so much. There’s not a sequence in this movie where they carry any established weight or dominance, the middling gray the best they’ll achieve. Generally, the Genesis is a cut above the Red or some other digital, Zombieland a great example of what it can do in terms of black levels, leaving some post production tinkering the likely cause.

Detail isn’t quite as mediocre or as disappointing, still producing some significant close-ups and bite when it comes to chain mail… and there’s a lot of chain mail. Bodies become torn and wrecked as the film moves on, faces bloodied and beaten, the benefit of HD preserving all of the nastiness in its glory. While still searching for anything of note in medium shots, and the special effects-laden exteriors are pretty rough, the Genesis pulls first string duty in terms of visual fidelity.

Ah catapults… and it has nothing to do with tortured bodies. This is the real stuff, actual rocks and whatever else the invading forces can scrape together being flung at the castle walls. Each collides on target with a thunderous boom, rattling the sub to its lowest point and enjoying it. There’s not much held back from this DTS-HD mix when the heavy stuff starts dropping.

Surrounds aren’t quite as barbaric, keeping in check as the swords begin clashing although hardly with the appropriate layer of immersion in tow. Swords and axes become center focused as two warriors take each other on, the stereos blandly forgotten and the other battles strewn around the courtyard? They’re not relevant.

Late in the film, some battering rams come into play, the sub picking back up for that and a castle wall collapse, which again all stays in the center or pitifully bleeding into the stereos on its best day. Ironclad needs an auditory lesson.

Director Johnathan English provides his thoughts via a commentary, the sole extra beyond some trailers for other Arc stuff.