Wayne’s World isn’t so much a movie as it is a stream of consciousness, following the minds of two grunge-obsessed slackers. There’s not much of a plot because Wayne (Mike Myers) and Garth (Dana Carvey) don’t have one either. They live oblivious to the world outside of their own existence. And they’re happy. Ridiculously, hilariously happy.

If Wayne’s World is significant for anything, it’s notable as the first film for the ADD generation, jumping from random references, vignettes, locations, and various nonsensical gags. Like a surreal early ‘90s rock dream, Wayne’s World takes whatever gags come available, as if the script were picked piecemeal from a thrift store that sells discarded comedies. Luckily, Wayne’s World bought the best ones.

Regardless of worldview, it’s hard not to fall for Wayne and Garth. They succeed – barely – and love life. Their perspective, whatever it actually amounts to, is weirdly inspiring. For all their struggles (Wayne still lives with his parents who go unseen in the movie), they do their own thing and make it work. That they love a good concert, hang with Alice Cooper, and produce a zero-talent TV show doesn’t matter to them; they exist to make all of this fun.

Sure, Wayne’s World utilizes sexist, sophomoric humor. This duo isn’t the type to keep up on society’s changing standards. Again, they go with what they know. A guy might puke in their car? So be it. They pick him up anyway. Mocking their rich sponsor? If it gets a laugh, then that’s a life lived.

Wayne’s World blew up in 1992, bucking the Saturday Night Live movie trend and weaseled into pop culture at large. Few people wanted to be Wayne and Garth though, just reenact their best bits. That missed the point. Wayne’s World was about turning into a basement dwelling monk, setting aside any stress and living alongside the things you love. In this case, that’s acting like an entertainer, rocking to classic tunes, and picking up women who can appreciate the inanity. A fantasy, obviously, but one with a kooky life message that’s infectious. 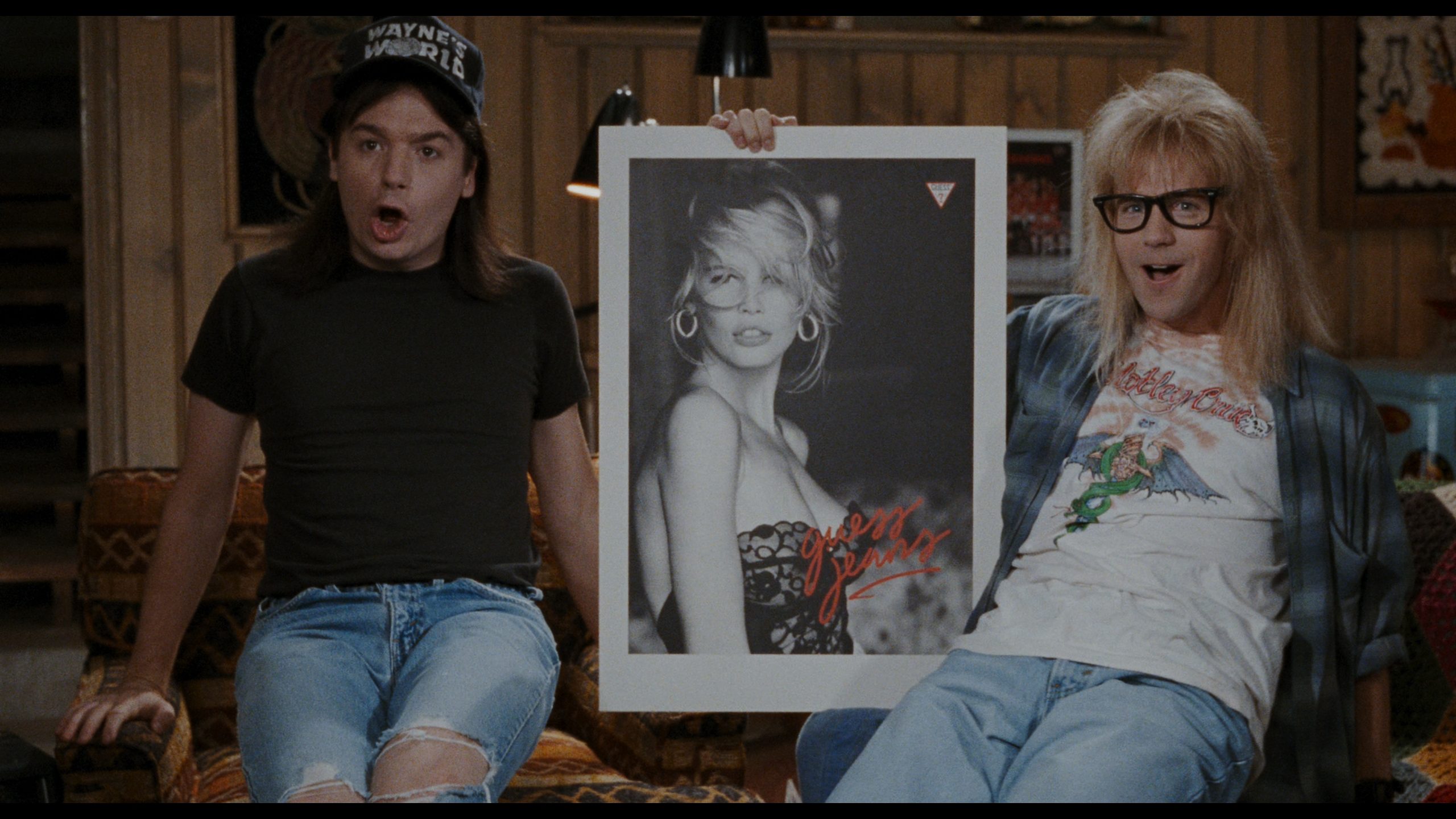 An odd anomaly at 56:58 or so turns the imagery into DVD-like mush. It’s just that scene for whatever reason.

Arguably the best way to hear Bohemian Rhapsody, the new Atmos mix plays around with the vocals, bouncing them around the soundstage even as the instrumentation rushes into the overheads. Clubs likewise fill the soundstage, whether it’s music or crowds cheering. The plane fly-over is a delight, filling every channel.

Subwoofer use remains part of the soundtrack primarily, passable enough to sustain the range. Again, the plane fly-over is a blast in this way too.

Director Penelope Spheeris delivers on a solo commentary track, and the making-of titled Extreme Close-Up is an oldie but a fun look back at the production.

Aimless like its main characters, Wayne’s World drifts through existence with barely any plot and that’s the point.