Elvis In Hawaii Does His Thing

Blue Hawaii is Elvis Presley doing what the King did best in cinema – playing a carefree young man driven by music while a gaggle of ladies romantically chase after him. Capturing Elvis at the height of his musical powers, the movie’s entertainment formula shaped his following film career away from serious drama into lighthearted vehicles made explicitly for his talents.

The first of three films for Elvis in Hawaii, the popular musical comedy is a light and upbeat vehicle for the King of Rock’n’roll which helped set the tone for the rest of his movie career. Featuring one of Presley’s greatest hits, the divine Can’t Help Falling In Love, the accompanying album for Blue Hawaii became the second biggest soundtrack album of the entire 1960s after West Side Story. The movie’s box office and musical success pigeonholed Elvis into making fluffy musicals for the rest of his career, largely thanks to Presley’s business manager Colonel Tom Parker.

Parker realized Elvis could make lots of money with his movies doubling as advertising for the accompanying soundtrack albums. Parker is not popular with serious music fans, allowing a prime Elvis to waste his immense gifts making commercially rewarding but artistically underwhelming movie albums for most of the 1960s, churning out formulaic films one after another to the point of parody. That shouldn’t affect Blue Hawaii’s status as a film but critics have often colored their opinions of it thanks to that unfortunate sidenote.

Chad (Elvis Presley) comes back home from the army into the arms of his waiting girlfriend, the lovely Hawaiian girl Maile (Joan Blackman). The heartthrob doesn’t want to enter his family’s business, heavily pressured by an overbearing Southern mother (Angela Lansbury). All Chad wants is to hang out with his friends and occasionally sing. When forced, the young man becomes a tour guide against his family’s wishes.

Delightful musical numbers led by Elvis himself take full advantage of the Hawaiian setting, wrapping a playful romance inside the story of a young man who wants to follow his own path in life instead of the stuffy family business. His character becomes admired by a group of visiting school girls, who cause nothing but problems. They introduce a little dramatic conflict into the mostly well-intended story.

Blue Hawaii on its own is a fun Elvis vehicle with a fantastic soundtrack packed full of great Elvis songs. Steeped in Hawaiian culture, the movie practically serves as a commercial for the state’s beautiful scenery. Having only been added as a state a few years prior, Hawaii was an exotic destination for most Americans in 1961 and few understood its natural splendor before the stunning Technicolor cinematography seen in Blue Hawaii. 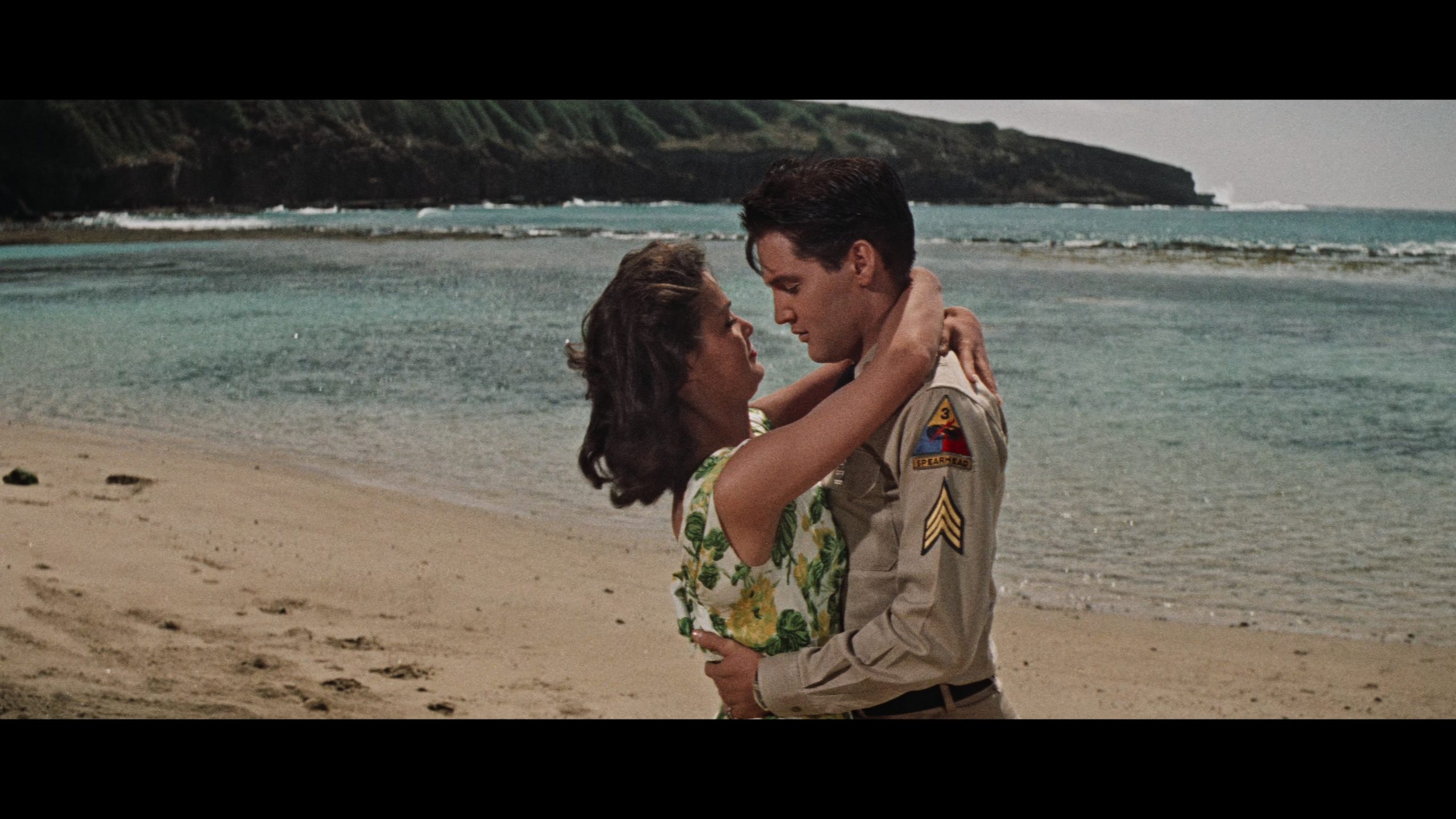 Every Elvis fan should be thankful and grateful for what Paramount has done with Blue Hawaii on UHD. The 2.35:1 presentation with Dolby Vision enabled stuns with amazing clarity and vibrant color rendition. The old DVD was a mess by comparison and now the film makes its High-def era debut in fantastic 2160p resolution. What a massive leap in definition and cinematic fidelity. The film-like transfer is great with unfiltered grain reproduction. Not every UHD is worth the extra dough but Blue Hawaii is one UHD you’ll definitely need as a fan.

The lush 1961 Technicolor film is given a new 4K scan from the original camera negative by Paramount. The negative is in better condition than expected, highlighting the nice depth and dimension found in the Technicolor production. They went above and beyond the call of duty, completely re-constructing the gorgeous opening title sequence from original film elements pulled out of the vault. The scene had always looked overly grainy and chunky thanks to dupe elements being used for the credit sequence until this remaster. A high-quality effort which pays massive dividends.

The scenic Hawaiian backdrop for Blue Hawaii has never looked more vivid in colorful Dolby Vision. It’s a fine-tuned HDR grading which pulls out deeper primary tones from the exotic costumes and sandy beaches. Witness the absolutely dazzling wedding scene. It draws out such deep and refined color rendition, bright splashes of red, purple, blue and green in fantastic clarity. Black levels are near perfect, offering greater shadow delineation. Crisp and clean, an even contrast and rich color saturation produce a bevy of videophile moments.

The main feature runs a full 101 minutes on a dual-layer UHD, smoothly encoded in high-bitrate HEVC for a mesmerizing presentation. It’s a technically astute transfer from a well-done 4K master.

Blue Hawaii receives a “restored” 5.1 Dolby TrueHD soundtrack on UHD which minimally expands the movie’s sound beyond stereo. You’ll be forgiven if you notice Paramount has inexplicably dropped the original monaural audio from UHD. It’s a limited surround mix, lacking low-end weight and high-frequency extension. There isn’t a great deal to the soundstage beyond the front channels.

Dialogue is intelligibly delivered, decently mixed in volume with fairly flat-sounding effects. Musical performances by Elvis exhibit fine fidelity but the recordings underwhelm given expectations of most fans. Blue Hawaii as an album soundtrack has been released in sparkling Hi-Rez quality, you are far better off with those pristine studio recordings.

Optional English, English SDH, and French subtitles play in a white font outside the scope framing. French and German mono dubs are offered in 2.0 Dolby Digital.

Blue Hawaii is #36 in the Paramount Presents line, arriving as a two-disc UHD and Blu-ray set with a phenomenal glossy slipcover, folding out with original movie poster art. An included digital copy redeems in UHD quality on either iTunes or VUDU. It’s a handsome package in line with earlier Paramount Presents’ releases.

Bonus features are strictly confined to the included BD, nothing extra resides on the UHD. Given the King’s popularity, special features are on the light side but definitely improves on the barebones DVD.

Audio Commentary by Historian James L. Neibaur – An informative solo commentary packed with details on the production and Elvis himself.

The lighthearted Elvis vehicle looks stunning in 4K as the King of Rock’n’Roll sings and dances his way across screen with memorable tunes and a gorgeous Hawaii as his backdrop.