Batman: The Long Halloween may well be the best story ever written for the Caped Crusader. That’s remarkable for a character that has been around for more than 80 years in multiple mediums. The original 13-issue series by writer Jeph Loeb and artist Tim Sale is nearing 25 years old and was a key inspiration for Christopher Nolan’s acclaimed Dark Knight trilogy. The mature noir mystery beautifully incorporates Batman’s deep roster of rogues as escalating mob tensions under Carmine Falcone hit Gotham.

DC has finally decided after producing dozens of animated films that The Long Halloween needed to leap from the page and reach a broader audience. Much like The Dark Knight Returns, the animated adaptation has been split up into two parts with the second part coming in a few more weeks. The wait may prove excruciating for fanboys that have been clamoring so long for the movie.

Batman: The Long Halloween – Part One is 85 minutes of pure Bat goodness with sleek storytelling, intriguing mystery and taunt action. Faithful in tone, if not completely all details, the highly satisfying animated DC movie is a new high point from WB Animation. Part One ends on a natural stopping point in the story, though Part Two has a significant amount of remaining plot left if the adaptation keeps everything intact.

Set relatively early in Batman’s crimefighting career, the costumed superhero is still learning his way around as a detective. Batman forms a pact with crusading D.A. Harvey Dent and Lieutenant James Gordon, as they attempt to bring down the head of the powerful Falcone crime family, mafia boss Carmine Falcone. Beyond villains like Catwoman and the Joker making critical appearances, more obscure rogues like Calendar Man are also part of the fun.

Structured as a mystery about an unidentified killer known only as Holiday, the powerful narrative smartly marries elements of The Godfather with the colorful trappings of Batman’s Gotham. Each successive holiday beginning with Halloween, an important figure in Gotham’s underworld is murdered by the mysterious Holiday despite the best efforts of Batman and his allies to prevent it.

The ball gets rolling when one of Carmine Falcone’s relatives, on the verge of testifying against the crime boss, is found murdered by Holiday under protective custody. The haunting mystery taunts Batman and torments Harvey Dent, who has vowed to bring Falcone’s criminal empire down. Dent becomes so consumed by the case that it slowly drives him over the edge and places a severe strain on his depressed wife, Gilda.

Batman: The Long Halloween has a great voice cast littered with talent. Jensen Ackles, who once voiced Jason Todd in Batman: Under The Red Hood, returns this time to voice Batman and does a fine job. Josh Duhamel handles Harvey Dent and the late Naya Rivera is excellent as Catwoman. I’m not always on board with celebrity actors roleplaying as voice actors, but this is a case when it works out.

Comic book fans will notice a few changes from the original material they may or may not agree with entirely. It was not an issue for me but other fans looking for a completely faithful adaptation of the graphic novel will be a little disappointed. The character designs have been streamlined for animation and do not resemble artist Tim Sale’s distinctive artwork. Batman: The Long Halloween does feature quality animation with expressive fluidity in most action scenes.

The big question on everyone’s mind is how writer Tim Sheridan (Superman: Man of Tomorrow) will handle the revelation of Holiday’s identity. What this animated adaptation gets so right is a smart, convincing package of action and mystery with crisp dialogue. The timeless noir feel and gritty storytelling is a smooth combo perfect for Batman. Recommended for all Batman fans without hesitation. 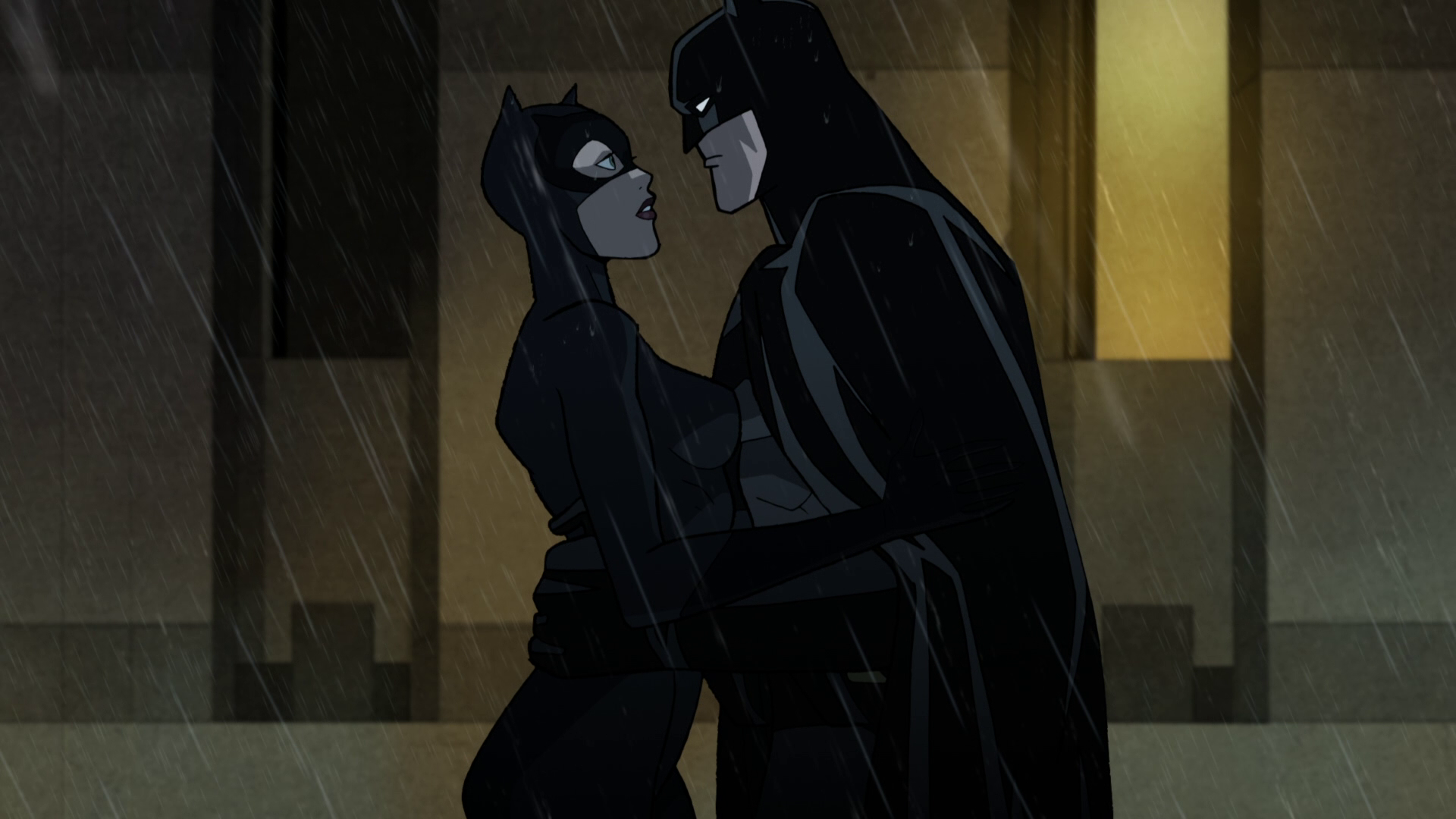 WB Animation continues using the same animation techniques seen in Superman: Man of Tomorrow and other recent DC films. The tone of Batman: The Long Halloween has a darker palette with moodier colors, greatly aided by perfectly inky black levels and smooth shadow delineation. It’s fairly evident that the budget and development cycle for The Long Halloween was more extensive than DC’s other releases.

The bold animation, incorporating a bit of CGI into a thick, cel-shaded approach, looks more refined and finished. It may irk some that we are only getting Part One on Blu-ray, when we more or less know a UHD version is likely coming within the next six months.

The animation doesn’t attempt to directly incorporate original artist Tim Sale’s stylized designs. It does achieve a consistent and impressive atmosphere that vaguely hearkens back to Batman: The Animated Series. I found it impressive with smoothly blended character designs and Gotham backgrounds loaded with fine detail.

Actual video quality is pretty good for a direct-to-video budget. The 1080p presentation at 1.78:1 has a few touches of banding but isn’t excessive, which almost surely will get cleaned up with the 4K UHD release. A few scenes like the big fight in Chinatown look like natural fits for HDR passes with dynamic color highlights.

I’m sure the eventual UHD will look better with stronger colors but many fans have been perfectly happy with the Blu-ray versions for DC’s animated films. This disc falls in that general category.

The 5.1 DTS-HD MA soundtrack is packed with nicely immersive action and strong dynamics. The active design has excellent separation when necessary such as when the Batmobile rumbles through downtown Gotham.

UHD fans shouldn’t despair about Batman: The Long Halloween Part One only hitting Blu-ray. After Part Two hits Blu-ray in a couple months, it should only be a matter of time before Warner announces the complete movie arriving on UHD later in the year or early 2022. As you can see below, the special features are fairly light for a major animated DC project. Warner is clearly saving material for a future reissue. Expect a double dip with better special features down the line.

This Blu-ray edition includes a Movies Anywhere digital copy that redeems in HDX quality. The general release has an available slipcover, while a SteelBook edition is a Best Buy exclusive. It should be noted that digital services are already carrying Part One in UHD quality.

DC Showcase Short: The Losers (16:04 in HD) – A new animated short that brings the rag-tag team of WWII heroes together battling dinosaurs on a South Pacific island. Captain Storm, Johnny Cloud, “Mile-a Minute” Jones, Gunner and Sarge are sent on a mission to save scientists. Working with Chinese agent Fan Long, this is a hectic but fun short with loads of mayhem and action.

A Preview of Batman: The Dark Knight Returns Part One (12:34 in HD) – An old, recycled featurette which serves as a promo for it with cast and crew discussing this older animated DC film.

A Preview of Batman: Gotham By Gaslight (08:28 in HD) – An old, recycled featurette which serves as a promo with cast and crew discussing this older animated DC film.

From the DC Vault – Two classic episodes from Batman: The Animated Series are included which loosely inspired some of The Long Halloween. The nice thing here is that both episodes use the restored HD transfers from the complete Blu-ray set.

Batman: The Long Halloween Part One

A great animated adaptation of Batman’s most thrilling murder mystery as the mysterious Holiday keeps killing each successive holiday, slowly pushing Harvey Dent to the dark side.