This movie will live forever

The brazenness of Starship Troopers was releasing only a few years after the Gulf War. The opposition? Reduced to insects who dwell in deserts. This is not a subtle film.

Dutch director Paul Verhoeven brings an outsider perspective to American politics. That was Verhoeven’s skill in the American movie system. Where Orion figured they were making an exploitative gore fest about a robotic cop, Verhoeven delivered a scathing breakdown of police states and capitalism in RoboCop. Where Sony/Columbia expected a bug movie during the late ‘90s monster boom, Verhoeven stitched together a timely – and timeless – fascist-led war epic.

There’s a fatalist view of warfare to Starship Troopers, intellectually concentrated and tonally cruel. It’s set in 2197, but military officers dress in faux-Nazi garb. They turn an under-educated population into masses of willing foot soldiers. History doesn’t just repeat itself in Starship Troopers; history stoops lower each time it cycles. By 2197, it’s a social nightmare.

Starship Troopers isn’t directly an American story. Earth is now a wholly owned Federation. That’s the only dodge. Galactic warships take on names the American way. The masculine attitudes breathe a nationalist superiority. High school kids become overwhelmed by their urge to become citizens. In the way present day kids join street gangs looking for acceptance, in 2197, they take up arms for a cause they don’t fully understand.

It’s not clear who to root for. While human troops turn into slavish drones holding assault rifles, so too do the bugs. We invaded them according to Starship Troopers’ lore, torching their planet and giving rise to invasion. The Gulf War weighs on Starship Troopers, as much as its satire of fascism, viewed from the perspective of supposed heroes.

The movie itself, to anyone not catching on, is a rising action picture designed for a cheer section

In 20 years since its release, Starship Troopers’ depressing qualities haven’t aged. In 2016, the US Army teamed with Fox for a recruitment video, partly meant as a teaser for Independence Day Resurgence. It’s a perfect blend of capitalist and militarist goals, of which Starship Troopers saw coming (even if it didn’t figure in actual aliens). Later, a snippet from a Federation broadcast evokes the anti-intellectual, screaming talking heads of contemporary 24 hours news. Starship Troopers predicted that, too.

The late ‘90s release date barely shows through. Veerhoven’s RoboCop looks like an ‘80s project; Starship Troopers, other than some mismatched “future” technology, doesn’t give itself away. Visual effects remain unusually strong and piles of dead soldiers keep their necessary grisliness.

Much of Starship Troopers is read as hokey. After all, the big bug picture drifted from cinemas before the ‘50s were out; here’s a movie bringing it back forty years later. Only now, there’s space ships and space battles and space travel. It’s bigger, louder. Where once there were two bugs, Starship Troopers includes thousands.

But, the quaint scientific endearment of Them! don’t peek out from Starship Troopers. Anyone not catching on is duped into a rising action picture designed for a cheer section. That’s the point. There’s a square-jawed hero (Casper Van Dien) in a nearly all-white cast, spouting macho lines about killing things. It has nudity, guns, one-liners, and violence, all the things needed to look, feel, and be exciting to an impressionable registration age teenager.

The clever surprise to Starship Troopers isn’t part of the plodding squaredance romance or an eventual character deaths. Starship Troopers is a propaganda film, but one utterly aware of itself. Miss that, and you’re cheering for fascist ideals. That’s the surprise. 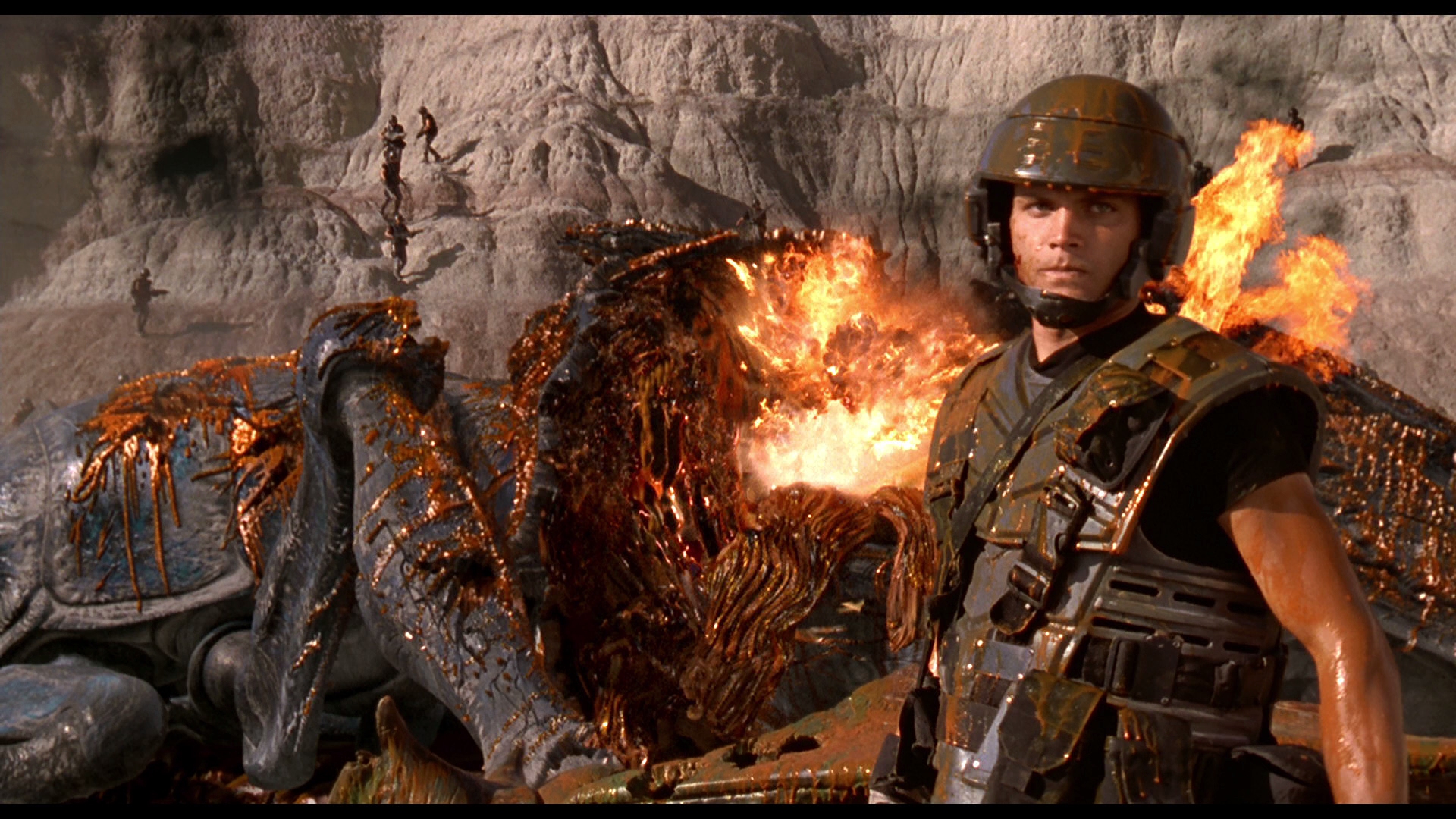 Sony issues a gorgeous 4K treatment of this sci-fi/political classic to UHD. The immediate effect of the format upgrade is resolution. Detail levels trounce the previously issued Blu-ray. Fidelity leapfrogs Blu-ray multiple times over, capturing high-frequency facial definition with regularity. But a handful of visual effects shots lose any of their sharpness, mostly those inside of Federation ships looking out into space. Bug shots hardly looks dated and upscale beautifully.

A somewhat bumpy grain structure does give the encode problems on occasion. Chroma noise pops up in spots, albeit minor. Film stock inconsistencies adds a challenge (macroblocking in the classroom scene is notable) but it’s otherwise a clean film-like appearance. Sony cleaned up any damage when working on this master.

Contrast tweaks deliver shadow detail and bug plasma sears the screen, more so than before. Things such as sparks tick upward in intensity, and an overall brightness boost gives weight to the desert sun.

Sony includes the same disc they issued as a stand-alone and in a trilogy box set about eight years ago. It’s an okay AVC encode, beginning to show its age. Why the remaster didn’t reach the Blu-ray is baffling.

Would you like to know more? You can read our previous review of Sony’s Blu-ray.

Since the late days of Laserdisc and early days of DVD, Starship Troopers’ stellar audio remained a home theater highpoint. Now it’s time for Dolby Atmos, and the Veerhoven bug war continues to dominate as an aural spectacle. A super wide soundstage adds to the overlong first act. A futuristic football game packs in the crowd and on-field audio. Ships fly across the soundstage effortlessly. Training scenes toss in lasers and live fire in a great showcase of how a soundtrack can extend the visuals.

Once into real combat, the rush begins. A flagrant overuse of nuclear weapons causes plenty of eruptions. The ground explodes like rushing water, spreading debris around the soundfield. In space, ship battles send an even better debris field into the home. Likewise, the LFE thrust is frequently enormous, enough to stack up against any modern day action flick. The plethora of explosions doesn’t hurt either.

On UHD, two commentaries carry over, the same commentaries as on the Blu-ray. Over on the latter disc, it’s the same as before, down to the dated use of BD-Live and BD-Java.

Want to know more? That’s what DoBlu’s previous Blu-ray review is for.

In the 20 years since its release, Starship Troopers gained in significance and power to become an anti-fascist, anti-war classic.

The 15 unaltered images below represent the Blu-ray. For an additional 21 Starship Troopers screenshots, early access to all screens (plus the 7,000+ already in our library), exclusive UHD reviews, and more, support us on Patreon.