Damon Wayans Reboots The Franchise For The 21st Century

It’s hard to believe that the original Lethal Weapon movie is now thirty years old. It was the film that made Mel Gibson a Hollywood superstar and holds up as well as any 1980s flick. The iconic buddy cop franchise lasted four films, starring Mel Gibson and Danny Glover as two LAPD detectives mismatched in personality. The duo’s chemistry made the first two movies eminently enjoyable Hollywood action vehicles. The less said about the latter sequels, the better.

Movie-to-television transitions haven’t always worked out in the past decade, as adapting a successful movie formula isn’t always assured in the longer form of episodic network television. Airing on Fox, producer Matt Miller guides Lethal Weapon to the small screen in what can only be called a surprisingly entertaining first season. The show easily had one of the best pilots of the 2016-2017 television season, smoothly mixing action with comic relief.

Damon Wayans and relative unknown Clayne Crawford winningly play the iconic roles of Roger Murtaugh and Martin Riggs. Wayans is perfect as the steady, veteran LAPD detective. Coming out of semi-retirement, Wayans practically channels Danny Glover’s character from the movies with grace and ease. His lovably reliable Murtaugh is paired up with reckless ex-Navy SEAL Riggs (Crawford). Riggs is the definition of a loose cannon, confronting criminals all across L.A.’s underworld and throwing his life to the wind.

While Clayne Crawford isn’t the name that Damon Wayans brings to the table, his dramatic touch gives Lethal Weapon a nicely balanced pair of leads that feed off each other. The movies worked so well because Mel Gibson and Danny Glover were perfect together as lovable opposites. The same formula has been struck with Wayans and Crawford in a winning combination.

The formula occasionally gets repetitive but is always entertaining, saved by its lighter comic relief moments

Lethal Weapon is a high-powered action series with humor and some drama. Glossy stunts and impossible physical feats (Riggs survives jumping out of a helicopter and falling from a five-story building) spruce up the typical cop formula so familiar to procedurals. Lethal Weapon is an expensive network show with flashy production values and high-powered casting. Keesha Sharp plays Roger’s loving wife Trish, providing amusing moments of domestic sanity. Jordana Brewster plays Cahill, a police psychologist attempting to help Riggs get over his dead wife. The series even introduces Leo Getz (Thomas Lennon) from the movies, though in a slightly altered form.

The overarching story-line of season one deals with Riggs struggling to deal with his wife’s recent death. Miranda Riggs looms over season one, even though the season begins after her passing. The self-destructive Martin Riggs spirals into pity and self-loathing, which is what precipitates him into moving to L.A. in the first place. He only gets partnered with Murtaugh as a favor to his father-in-law. If anything, season one drags this emotional arc out far too long. It’s like a breath of fresh air when guest-star Hilarie Burton shows up as DEA agent Karen Palmer, introducing a potential love interest for Riggs.

If you enjoy the buddy cop dynamics of the Lethal Weapon franchise, this first season is an unqualified success. They nail the critical lead roles with two actors perfect for network television. The formula occasionally gets repetitive but is always entertaining, saved by its lighter comic relief moments. Let’s hope that season two allows Riggs’ character to grow out of mourning for his dead wife. 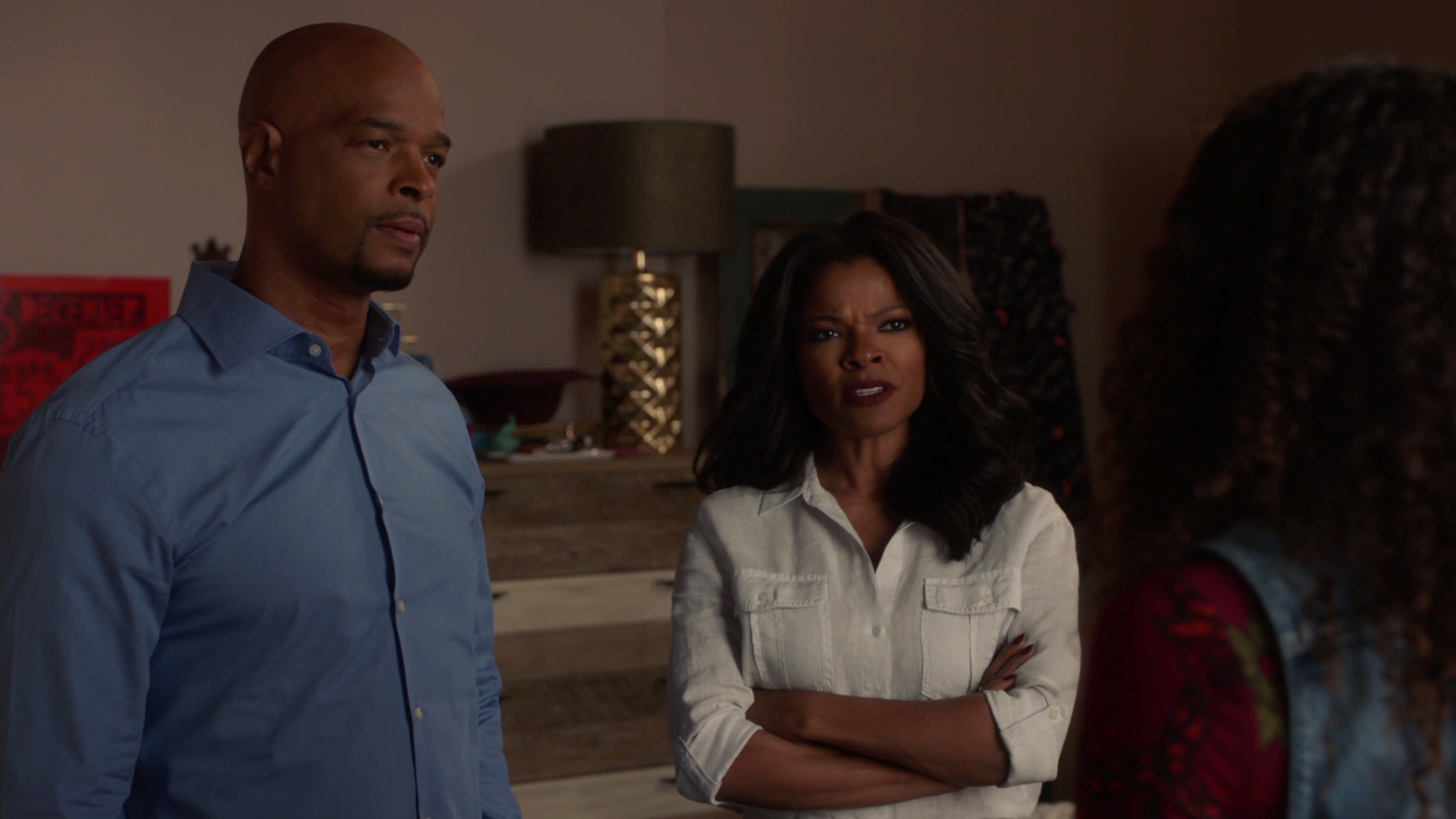 Season one contains eighteen episodes, all running over 40 minutes. WB includes them on three BD-50s in an AVC encode that one may question its compression parameters. This 1080P presentation is superior to Fox’s Hi-Def network broadcast, though Lethal Weapon’s digital cinematography is a step behind the best network fare in terms of video quality. Filmed using the reliable Arri Alexa digital camera, the 1.78:1 video has ample definition in a high degree of clarity. The best-looking shots are usually the panoramic establishing shots of L.A. in the Californian sunshine.

Lethal Weapon’s pristine digital video does waver oddly in razor-sharp detail from scene to scene. Minor filtering could have been applied as every actor appears younger than their actual appearances. Minor inconsistencies in depth and definition indicate a production that isn’t particularly concerned getting the sharpest, most vibrant picture quality possible in each shot. In that regard Lethal Weapon is a decided step behind premium television like Game of Thrones or Ray Donovan.

Don’t get me wrong. Most will find Lethal Weapon’s first season a satisfying Blu-ray experience that looks nice on their big screens. Most of my complaints are small in nature that shouldn’t take away from its general video goodness.

While the show engages with immersion when the action heats up, the audio design is limited in scope outside of them. Lethal Weapon has more dramatic scenes than one would expect from a high-octane police show, playing more like a drama much of the time. The dialogue is crystal-clear and precise, nicely balanced within the active audio elements. A quiet underscore is boosted with lively contemporary music when needed, from Rap selections to quieter acoustic numbers.

Optional English SDH and eight other subtitles are included, from German to French. They play in a white font. Three separate foreign dubs are given as options in 5.1 German Dolby Digital, 2.0 Spanish DD and 2.0 French DD.

There is something curious about this television set from Warner Bros. It does not include a digital code of any kind. One gets the feeling that WB is testing the waters with Lethal Weapon by releasing it on Blu-ray. Unlike some other studios, WB rarely orphans a show on Blu-ray even if sales disappoint. I hope we continue to get Lethal Weapon released on the format as long as it stays on the air. Its expensive network production values are a good fit for the format.

The three-disc set comes in a slipcase. The included booklet offers an episode guide and cast listing. This isn’t a loaded set by any stretch but the featurette with the producers is fairly informative for a casual discussion.

Extended Pilot (Uncensored) (47:01 in HD) – This pads the pilot written by Shane Black and directed by McG nearly a minute over its original broadcast. The added footage is more hype than substance, hardly worth featuring as a key special feature. I have a hunch that this footage getting cut was less about Fox’s censorship and more about trimming excess fat from the running time. That being said, this was one of the best pilots of the 2016-2017 TV season. Don’t expect any salacious content in the new footage that would have been too rough for network TV in 2017.

Reloading Lethal Weapon (15:41 in HD) – Series actor Johnathan Fernandez hosts this quiet chat with executive producers Matt Miller and Jennifer Gwartz about the series. Apparently Damon Wayans quickly agreed to the series and it took them months finding the right actor to play Riggs. Definitely interesting background on the series from its creator with decent insight behind the scenes on the casting process.

A fine television adaptation of the movie franchise that recalls the franchise’s better days in the 1980s.

The unaltered images below are directly from the Blu-ray. For additional screenshots, early access to all screens (plus the 7,000+ already in our library), exclusive UHD reviews, and more, support us on Patreon.