Thank you Bad Teacher for having no moral compass. For once, we have a comedy where yes, the bad girl wins, there’s no lesson to take away, and it plays foul even with kids in the room. In between it all, it’s flagrantly tossing out loads of genitalia references, diarrhea bombs, and an insurmountable need for pot. Awesome.

It’s okay to hate Elizabeth (Cameron Diaz), a gold digging, foul mouthed, sexual deviant who is single handedly bringing down an entire generation of our youth. You’re supposed to despise the character, stare in awe that she gets away with it, and still thinks she deserves more. She’s the worst kind of person, and playing it down for the screen only defeats the point.

There are superstars in the wing, not Jason Segel though. He’s funny, but straight-laced, reserved Jason Segel as we know him from everything. Comedy killers here are Amy (Lucy Punch) and Lynn (Phyllis Smith). You can tell when they haven’t been around for awhile, Bad Teacher losing much of its comedic balance.

A lot of that comes in the third act, Elizabeth weaseling her way into a bonus check for a boob job, all while working over the hot substitute teacher. Losing the stable, “go with the flow” Lynn breaks the films dialogue and part of its necessary character.

There’s still Amy though, the focused, spunky tattle-tale with an ego the size of the school, except for an incident back in 2008. So bound up tight, Amy’s goal isn’t to inspire students, but take down what she perceives as a pot smoking, test stealing, man raping, movie showing teacher… she’s right, of course. Still, there’s a determination there that sells the role and in actuality, the movie.

Antics of Elizabeth don’t hurt either, the sexy 7th grade car wash or her love of the Scream films for their educational value certainly making the movie live up to its title. Apparently, with $200 million in box office revenue, there are plenty who agree, no? 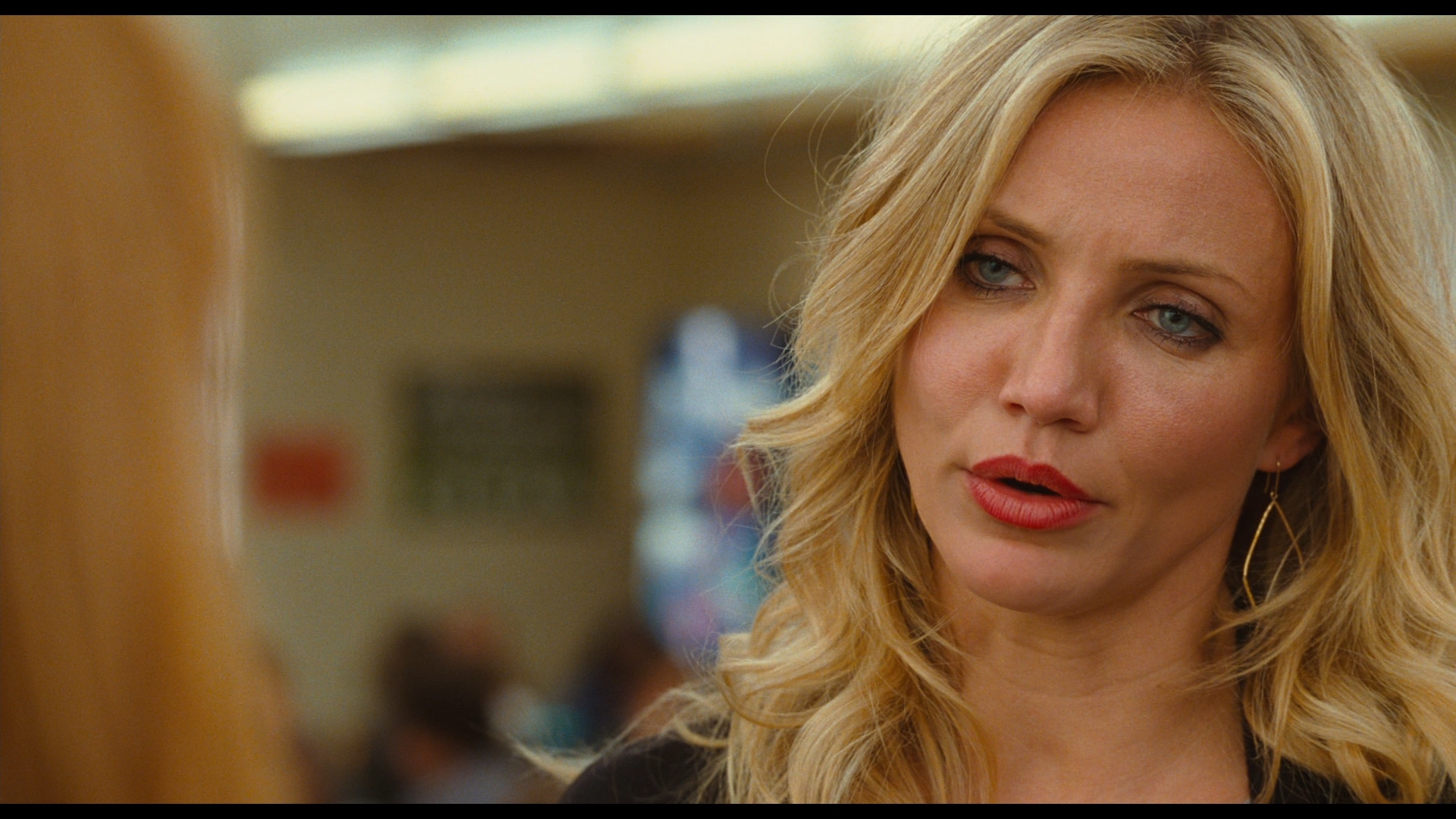 Sony pushes out a mildly inconsistent looker to Blu-ray, the AVC encode enough for this standard material aside from chroma noise. You’ll spy that on the walls within the principal’s office. See, teal isn’t good for anything, is it?

Black levels have a nice, weighty quality to them, remaining that way except for the bar sequence about the midway point. For some reason, they dim into a deep gray, still holding enough power to produce necessary dimensionality. Contrast will carry some zest into the classroom, never overpowering or sapping detail.

On the latter front, definition comes and goes, at times wonderful behind a fairly powerful grain structure, and other times turning Cameron Diaz into a plastic doll. Fine detail runs the entire gamut, but majority wins, Bad Teacher more refined and pure than not. Plentiful close-ups perform as expected, and medium shots will shine. Exteriors of the school are superb.

Colors are saturated to typical modern comedy levels, meaning flesh tones will be singed to a burnt orange and primaries are beautifully vibrant. Reds, blues, and greens light up the screen, giving an already bright image increasing presence. Bad Teacher starts with a slew of classroom stock footage and makes the transition into hi-def a bit rough although generally unscathed.

For this DTS-HD effort, its singular job is to replicate the grade school experience, including loud hallways, bells blaring, and plenty of ambient talking between the kids. It does, enveloping the listener in clean, well designed class breaks, and noisy lunchrooms.

All the while, comedic dialogue dives into the center, given a hearty presence and superb balance. The barren gym will add a mild echo, just enough for an ounce of atmosphere to this comedy farce. A brief bit involving a band sparks the music to liven things up, while all else is sufficient for the material.

There’s not a bunch to the extras department even if it looks like it, the first being a collection of scenes related to specific characters called Jams Yearbook: Hidden Moments. You’ll also get a peek of factoids about each featured role. A five-minute gag reel has plenty of flubs worth watching, and outtakes separately provide alternate takes that the actors barely get through without laughing.

Six deleted scenes run a near the six minute mark, followed by an interview with Justin Timberlake and Jason Segel that just turns into a back-and-forth annoyance. It’s actually quite amusing watching these two go head-to-head. Raising More than Funds focuses on the car wash scene, and A Very Odd Blacksmith is an in-character piece about a bit part played by writer Lee Eisenberg. Two featurettes follow, Swimming with Dolphins about actor John Michael Higgins, Good Teacher taking quips from cast & crew about what makes a teacher memorable.

BD-Live, Movie IQ, and the ability for new scenes inserted into the extended version (theatrical cut is here too) are left overs.