Scream is a slice of genre heaven, a brilliant take on a type of film that has been so overdone, ridiculed, parodied, and lambasted that Scream may have single handedly revitalized it. Most importantly, people got it, enough to turn a minimal investment into a multi-million dollar franchise. Thank you movie audiences for being smart enough to “get it.”

Maybe you don’t necessarily have to completely understand everything that happens in this gloriously overdone slasher, but it sure helps. We’re not talking about the obvious either, stuff like the janitor wearing the iconic sweater, Henry Winkler peeking out and saying, “Hi, Freddy.” That’s for genre newbies. People who really latch onto to slashers will catch names, familiar cues, overused false scares, and a double twist ending as if Scream is one-upping the entire genre.

It’s effective too as a homage, the famous opening sequence as Drew Barrymore is stalked by the masked killer still works. The performance is great, the tone is dead on, and the gore effects? They’re classic. Better yet, Scream has infinite replayability, the type of film where it doesn’t matter if you know who the killer is, because as it’s easy to say, the devil is in the details. The movie loves it all, from the nearly irritating and abusive misdirection to the cliches it worships.

Scream also lets a slasher movie finally be acknowledged as smart, remembered for more than a few gory kills (although it has some good ones). Scream launched another cinema icon, a bumbling killer with a ghost face and a knife who can take a beating. He’s not a supernatural murderer or ticked off seven foot giant. He gets slammed by doors like the rest of us would if we were crazy enough to run around slaughtering high schoolers. In a way, it might be the most realistic slasher ever made, even though it’s not even trying to be. 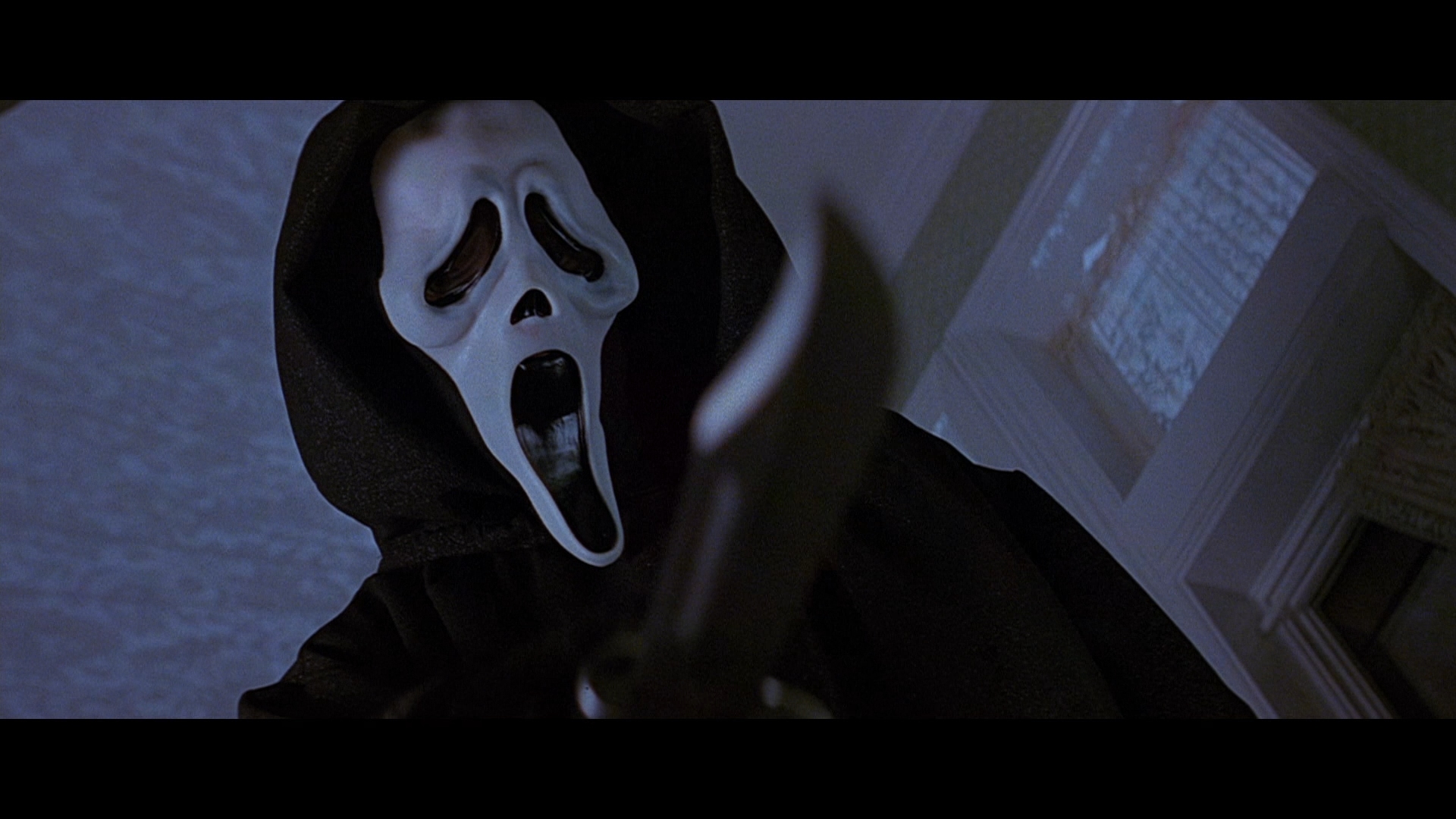 Who knows when the first ever hi-def master was struck, but it wouldn’t be a stretch to believe it’s this one used for Scream’s Blu-ray debut. Oh sure, it has some positives, including some nicely resolved close-ups and decent black levels.  There’s something great lurking here. Everything else though? Ugh.

Maybe Lionsgate forgot that they had yet to release Scream to Blu-ray, and had to shovel this out at the last second to capitalize on the latest sequel. A little honesty never hurt, and if that’s not the case, their quality control sucks. The film has been slathered with edge enhancement, leading to every type of halo you can imagine. Like dark, thick lines surrounding people? You’re covered. Maybe you prefer the more glaring, angelic white outlines like in the olden days of DVD? That crowd is taken care of as well. The movie was trying to appeal to everyone you know.

The sharpening means the grain structure no longer resembles grain, more like giant clumps of dirt swarming the image. Lionsgate can give the best AVC encode imaginable to this one and it’s not going to do it any favors. Hey, at least the crushing black levels save it a little bit of work. Shots of the town, buildings, or pans are nothing but mud, turning tree leaves into solid objects, grass into a glob of mud, and people into objects sort of resembling the actors who play these roles.

If you need anymore hallmarks of a dated master, look at the color. Primaries are terribly over saturated, from the blue of the cheerleading outfit in the bathroom to all of those greens lining the town. They bleed out, the master showing no control over basic primaries. Even the source print is a bit of a mess, saddled with some random damage that makes you wonder if this was even culled from a first generation print or some second, third, or fourth generation source. If it is from the negative, can someone responsible clean this one up for a proper release?

What Lionsgate did to the video is bad, and trying to come up with any other adjective would lead to words inappropriate for a loosely defined “professional” review. The audio really isn’t up to snuff either though, and while not quite the travesty the visual presentation is, there’s not much to praise on the aural side either. It has some positives like its primary cousin. The surrounds are well utilized, including some obnoxious insects chirping as the party kicks off at 1:02:00, all the while music blaring as well. Atmosphere is strong, from the school’s PA to the wrap-around effect given to the score. Separation is fine.

It’s the fidelity that sort of meanders around, never peaking cleanly. While the score carries some weight, dialogue isn’t pure, producing a slightly muffled quality that would be expected for a movie of some age… just not one from 1996. As Courtney Cox’s character attempts to flee the scene in her van, crashing though the picket fences, the boards snapping from the accident lack a general crispness. Again, it sounds dated, and if the disc stats didn’t say DTS-HD, it would be hard to believe this wasn’t general Dolby Digital.

Since the video looks untouched after about 10 years, it would be no surprise if the audio was left alone too. Scream provides plenty of stereo and rear speaker usage, and if that’s all you’re after, you won’t have much trouble here. If you’re one for clarity, this isn’t much of a success.

Director Wes Craven and writer Kevin Williamson provide the commentary track, followed by a promotional studio featurette from 1996 that runs six minutes. Two behind-the-scenes pieces, one general and one on the scene with Barrymore, offer a nice look at the on-set action. A brief two question Q&A covers some of the cast and crew as they tell of their favorite scary movies and answer why people are drawn to them. Aside from the commentary, that’s about 17-minutes worth of extras, so at least they offer up a slew of trailers.