The brutality of Unleashed is tremendous. Jet Li, almost entirely free from the confines of wire work, uses his finest of attributes to maul every opponent he is faced with, taking them to the ground and pounding on their faces with reckless abandon. It’s care free violence, Danny (Li) trained purely as a killer, no sense of morality deep within him.

That’s why Unleashed is the movie that it is, bringing out those traits in someone with the mindset of a child, sheer violence within his bones, and yet making the audience believe he can be tamed. He is taken away from his life as a mob boss’ slave when he meets a blind piano teacher. Sam (Morgan Freeman) takes him under his wing, slowly developing Danny into something more, a character with deeper traits and humanistic qualities than is to be expected from the typical film of this nature.

Fighting alone does not carry the narrative, although the intricately choreographed brawls are tremendously well done, particularly one late in the film in a tight corridor where the combatants can’t even outstretch their arms. The violence is harsh on purpose, strengthening the contrast between those quiet, peaceful moments as Danny is accepted. It’s not violence for the sake of casting Jet Li, his performance here one of the best with few words and reactions. You see the sorrow on his face and on his posture. Looking in his eyes, you can see someone desperately trying to escape, but no means of doing so.

Every performance is up to the task, Bob Hoskin’s despicable actions done without remorse, manipulating Danny, and abusing woman. He’s that perfect movie villain, the type that doesn’t need some overdone one-on-one showdown to meet his demise. Any harm brought to him is satisfying, and the movie is sufficient when the time comes.

Unleashed is offbeat, even if the core idea of rehabilitating someone through calmer, gentler means seems familiar. It’s rigid structure, flash cut editing, and at times even oddball approach to story elements seem out there, if logical within the sense of the film. Danny becomes infatuated with fruit, oblivious to a store-wide brawl occurring around him in a moment played for dark laughs, and story progression. It’s a smart martial arts film, and one with a tender side, a combination few people would ever expect to work. 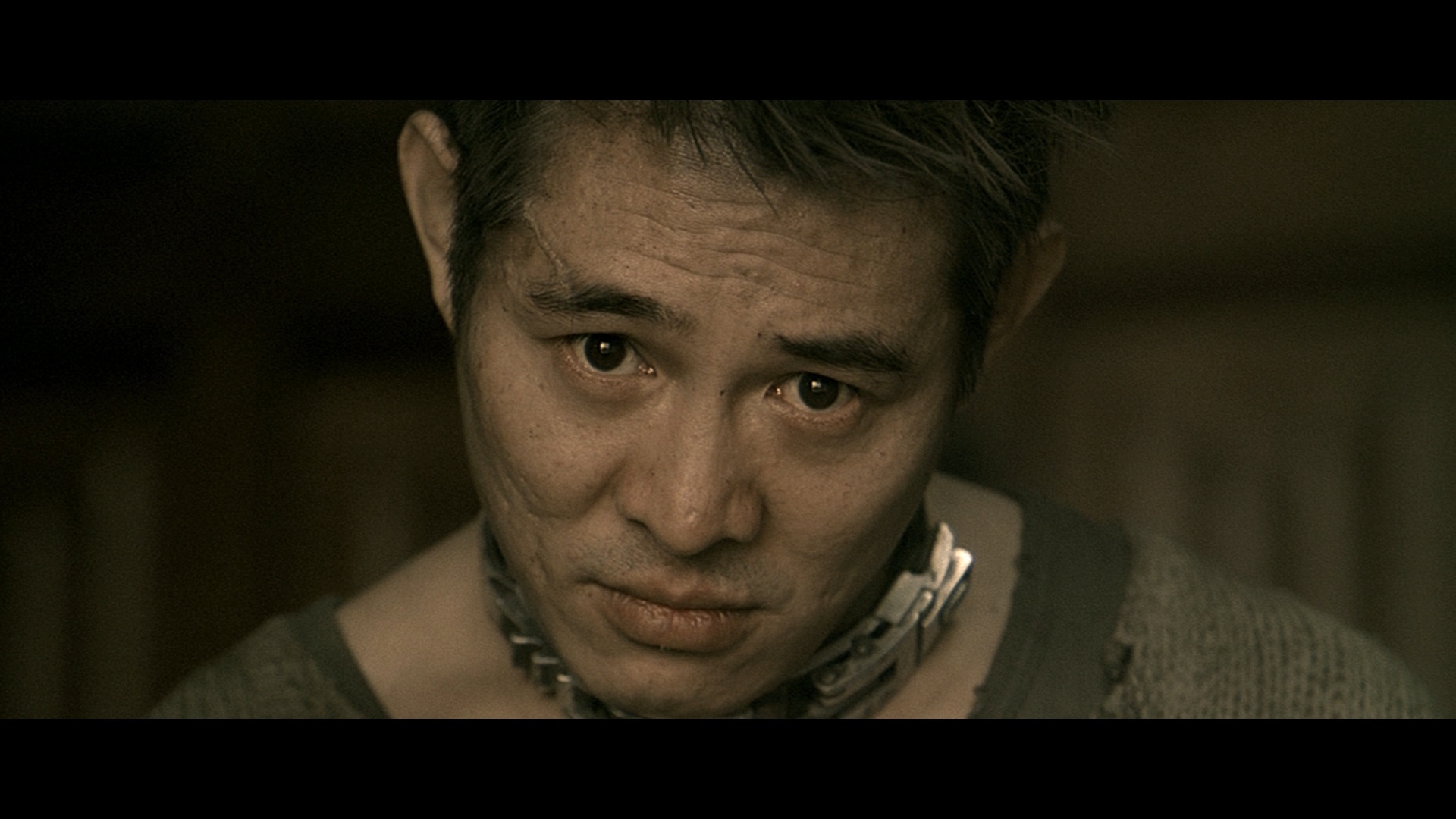 Unleashed was released to HD DVD with a crisp, clean encode. It wasn’t the best transfer ever, marred by the source material’s rather drab look, but it was sufficient. For Blu-ray, it’s an utter disaster. Despite having a reasonable master to utilize, Universal took the opportunity to “remaster” the film in a way only they know how.

The level of edge enhancement here is unbelievable, thick halos surrounding almost every object in the movie. Some of the worst comes inside the jewelry store around 11:53, the mass of force fields apparently having no effect on Jet Li’s punches. Morgan Freeman’s glasses are regularly outlined, and any establishing views are rendered muddy and indistinct.

By adding that layer of completely unnecessary sharpening, the grain structure has been elevated well above its natural confines. It can envelop the image, and when it does, the VC-1 encode gives up the good fight. The film has always been coarse and noisy, but never like this. Objects are awash with artifacting, the walls swarming with noise at 1:33:02 and the whites typically impure. Contrast runs hot blotching out many textures, but that’s the least of this efforts problems.

Colors are appropriately muted and flat, skin tones pale or pink for much of the film. That’s fine. However, the black levels are completely awful, light enough to completely fail in establishing a sense of depth with their murky, faded qualities, yet still able to cause a total loss of shadow detail. Morgan Freeman is swallowed by the dimness at 45:49, his darkly colored clothes lost to this effort.

Fine detail, at the very least in close-ups, is serviceable. With the layer of manipulation on display here, it still appears coarse and unrefined. Textures are rigid, not crisp. The unnatural grain structure wipes anything out of the mid-range, and the tampering renders the tattered green shirt worn by Li for the most of the film a muddy mess. At a distance with the camera pulled back, you’d almost be better off with the DVD at times. There is no excuse for a transfer like this, even less so considering a far better version is already available.

The DTS-HD audio mix is the only reason to upgrade from the HD DVD if you were looking to do so, although it too seems rather flat. The original DVD suffered from significant balancing problems, the bass-heavy score overly prominent. That is no issue here, the throbbing bass line now contained naturally within the mix as everyone gets their fight on.

Disappointingly, the bass is all over the place, the sound design obviously focused on making this all seem real, so punches have only minimal low-end accompaniment. Reality sets in when the guns begin firing, first during the car accident at 27-minutes, the small arms packing a wallop as bullets are ejected. Later in the film, oddly exactly one hour later, interior gunfire plays a role, the added echo slipping into the surrounds naturally.

The rear channels are typically left alone, the camera always focused on the action, punches and such always contained in the stereo channels. Nothing here feels overdone as a result, the wide stereo split effective enough. Ambiance is still retained, the fight pit surrounded by people at 1:05:00 cheering on the brawlers. Debris will slip into the rears too, shattering glass and such panning around.

Fidelity is fine, the benefits of being uncompressed evident, if only slightly at times. Piano keys ring true when struck, and the various fight sound effects are crisper. Dialogue is balanced well, many lines spoken in a light whisper without any issues in terms of volume.

All base extras are carried over from the HD DVD, including the slightly extended director’s cut with a minimal level of violence and brief nudity slipped back in. Louis Leterrier Unleashed looks at the director as he briefly discusses the idea of the film before talking about characters. Serve No Master focuses again on the characters and their roles. The Collar Comes Off is a typical behind-the-scenes promo. Music videos, D-Box support, and BD-Live access are here too.